Can a Robot Help Teach Classics of Literature? Sphero’s Ed Uses Range From STEM to STEAM 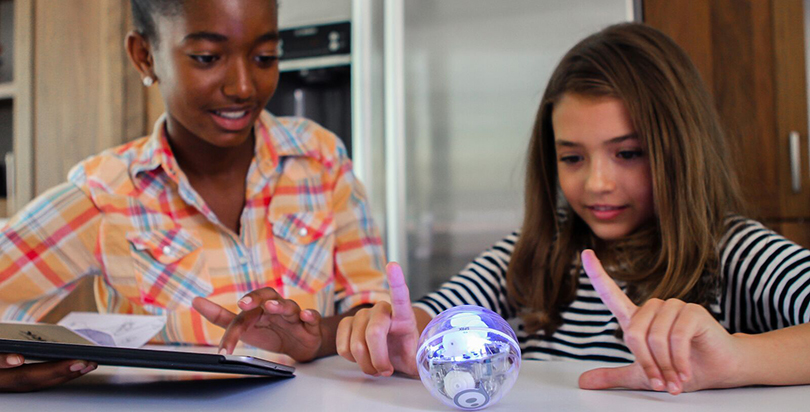 Robotics as science makes sense. Robotics as a way to teach math follows logically. But as robotics has moved from an after-school activity into more classrooms, Sphero’s SPRK+ robot — a 3-inch-diameter, 14.4-ounce ball of robotic learning — has rolled straight through science and math into English and art.
“Robotics has opened a whole new level of interest in the literature we are reading,” Rich Perry, an Apple distinguished educator at Sanford H. Calhoun High School in Merrick, N.Y., told The 74. “I am finding that this total immersion in the literature is creating a more realistic experience for my students, and therefore driving them to reading and appreciation of literature.”
Using Sphero’s Lightning Lab app, which allows for full programming of the see-through, baseball-size robot, Perry uses Sphero to create empathy among students for characters in novels.
“I was teaching my 11th-grade class The Grapes of Wrath, and the students were not connecting with the characters,” he said. “My students are relatively affluent and didn’t really believe that sometimes bad things happen to good people. To get my kids to understand the characters, I gave them Spheros. I created a mountain out of foam and felt and assigned a Sphero to each group.
“The Sphero became the physical representation of the groups’ families, and now the students had to cross the mountains. They became migrants and experienced the frustrations and failures that the characters in the book faced, albeit on a limited scale. This created the empathy I was looking for in the classroom.”
In another lesson, with younger students reading Lord of the Flies, he gave each group of kids a Sphero to represent a character, programming limits on the robot to simulate the limitations of characters. Students had to face survival challenges with the robots, such as starting a simulated fire or hunting for a pig.
“As they progressed through the challenges, the student groups turned on each other,” Perry said. “The students went ‘Lord of the Flies’ and really were able to be immersed in the experience of the characters in the book.”
Education was not Sphero’s original focus, David Millage, general manager of education, told The 74. The robot was developed for play. But the hacker and maker culture, he said, “pulled” Sphero into education to allow connected play to become the teacher. 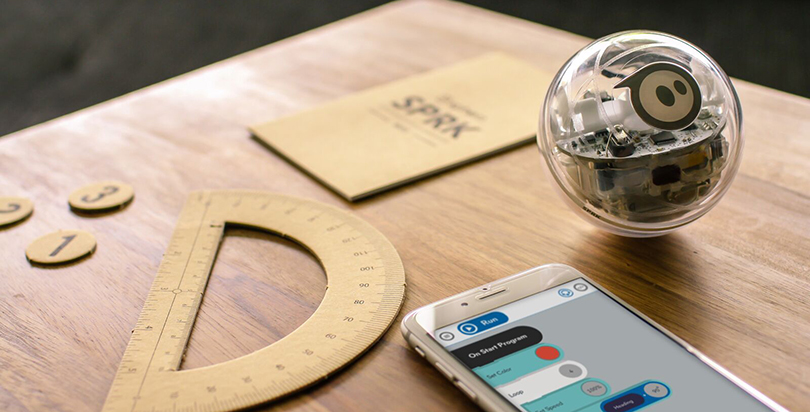 Photo: Courtesy Sphero
Science and math uses were obvious: Students learn geometry through programming and gain digital literacy through simple coding.
“Robotics used to be an after-school program for geek kids,” Millage said. “What we’ve seen with our robots is robots moving from after-school programs into classrooms. Gone is teaching programming via textbook; what we are seeing now is teachers using robots and apps to replace traditional curriculum. Instead of passive lectures and worksheets for geometry, the hands-on use of the Lightning Lab app and SPRK+ robot allows students to learn geometry through programming and robots.”
But Sphero has also experienced an organic slide into art, history and English. The robot can be fitted with a washable cover, so art teachers can program it to roll through blobs of different-colored paint. Millage has seen history teachers use robotics to teach lessons about how ancient Romans constructed chariots. And then there are Perry’s English classes.
As Sphero’s robots have expanded into multiple areas of education, Millage said, the company has begun developing a series of activities across grade ranges and subjects that will allow teachers to use Sphero lesson plans to change the way they approach classroom instruction.
Through open software development kits, anyone can write apps for the Sphero robots, but the Lightning Lab app gives students drag-and-drop programming options and about 150 activities, all connected to the robot via Bluetooth. And, Millage said, SPRK+ works particularly well in classrooms because of its size.
Costing about $100 per robot for educational use (with a $30 discount), Sphero can be purchased in 12-packs for less than $1,200, which can give many teachers a roughly 2-to-1 in-class ratio of students to robots. Add-ons of chargers, covers and maze tape make Sphero easy to use and give teachers an “activity right out of the box,” Millage said.
From walking students through drawing a trapezoid with the robot or navigating a maze, Millage said, Sphero provides interactive lessons that create fun learning activities and “days kids remember” — whether it’s science, math or even art or English.
Submit a Letter to the Editor
December 4, 2016