California in the Age of ESSA: Can Schools Be Held Accountable Without Real Consequences 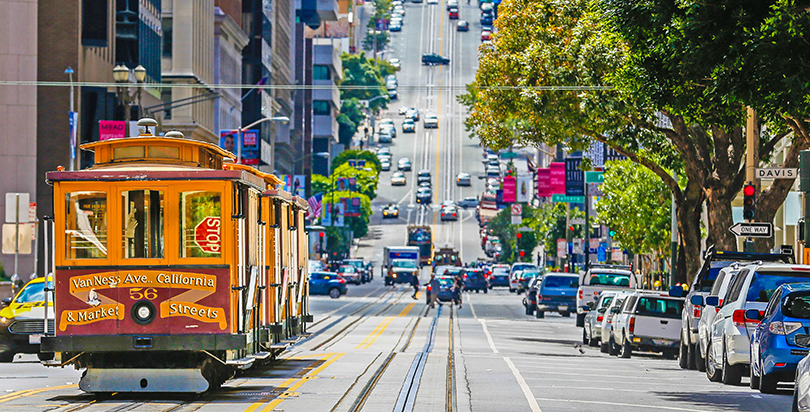 This is the last in a three-part series examining California's approach to education data and school accountability. Part One surveyed how the state's skepticism of test-based accountability starts at the top with Gov. Jerry Brown, who successfully took on the federal government; Part Two explored how the elimination of certain data systems has limited educational research in one of the country's most consequential states.
California is hoping to redefine school accountability in the “California Way.”
While state officials are hard at work designing a system in line with the oversights demanded by the Every Student Succeeds Act (ESSA), the new federal K-12 education law, they also want to remain true to the state’s ethos of de-emphasising test scores and focusing on helping — rather than “punishing” — struggling schools.
“We have had now basically three years without a functioning accountability system and we’re approaching the moment when we actually have to put something in place,” said David Plank a Stanford professor and executive director of the research group Policy Analysis for California Education (PACE).
A report released in May by a task force convened by the state superintendent lays out a series of metrics — beyond standardized test scores — for judging schools, but says little about what happens to the ones that persistently score poorly.
The system will also be crucial to the future of the state’s public schools, which grapple with limited funding and poor data systems that make it difficult to track areas where improvement is needed. California students post some of the lowest test scores in the country on federal exams and while, fairly wealthy, the state spends among the least on K–12 education.
As other states face similar tensions, California’s approach may point to the future of accountability across the country as one of ESSA’s pillars is devolving power from the federal government. The state appears on the verge of designing a system that moves beyond a narrow focus on math and reading test scores while including measures of equity, such as suspensions and expulsions, which fall disproportionately on special education students and those of color.
At the same time, it’s not clear that there’s the political will to give accountability any teeth — to intervene, and even, in some cases, sanction schools that are low-performing year after year by, for instance, labeling them as failing or dismissing staff.
Accountability but then what
The state must balance an array of competing interests in creating a new system for evaluating schools. California has to meet still-to-be-finalized federal guidelines under ESSA, while creating coherence between those new rules and its already-planned system for district-focused accountability.
Many want the state to continue to avoid a focus on test scores and accountability that imposes strict fixes; yet a number of advocates say California needs to intervene in schools that flounder year after year.
The plan is for school-based accountability to be underway in the 2017–18 school year — but many details need to be worked out before then.
Last month, the “accountability and continuous improvement” advisory task force, convened by state Superintendent Tom Torlakson, put out a list of metrics for judging schools, many of which were backed by the state Board of Education. The group was co-chaired by Eric Heins, head of the California Teachers Association, the state’s largest teachers union, and Wes Smith, executive director of the Association of California School Administrators.
In interviews, several task force members praised the group’s recommendations and collaborative approach.
Samantha Tran, of the nonprofit Children Now, was one of them. She described the task force’s two main camps: the “traditional education community” and a “number of equity advocates.” In the former, she included administrators groups, teachers unions and school board associations, among others, and in the latter, she included herself and others concerned with ensuring measures of equality were included.
“We really pushed on each other in terms of [our] bottom line — what were key things that people wanted to make sure were reflected in the report, so at the end of the day, we could all sign on to it,” Tran said.
The task force agreed that schools should be judged on a variety of measures, including tests scores, rates of suspension/expulsion, chronic absenteeism, college and career readiness, and high school graduation rates.
But the report was much less clear on what interventions look like when schools are deemed low-performing. The task force’s explanatory graphic speaks to the complex nature of the undertaking and in some cases a lack of clarity. 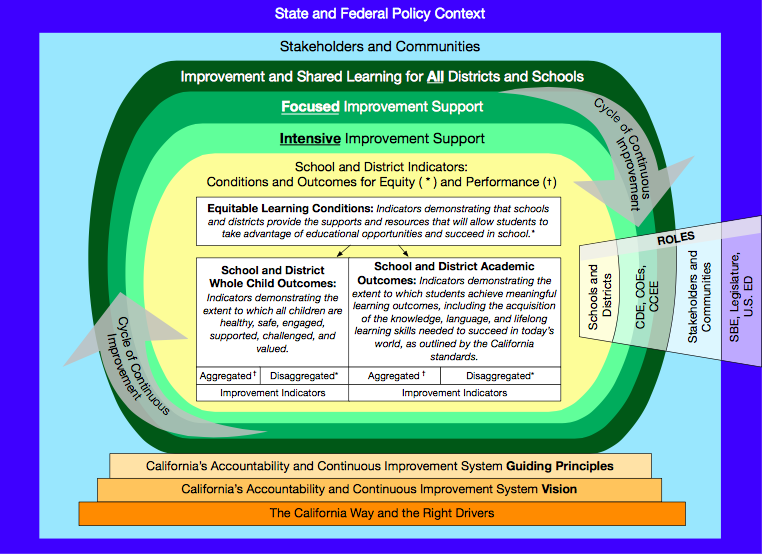 A graphic from California’s “accountability and continuous improvement” task force.

“The idea that large proportions of schools would be held accountable was taken off the table pretty quickly,” said University of Southern California professor Morgan Polikoff, also a task force member. Polikoff said the focus was largely based on what measures to use, “not what would happen based on those measures.”