Byard: 4 Supreme Court Cases Being Argued This Week, and a 5th Case in Indiana, Put LGBTQ Students and Teachers at Risk 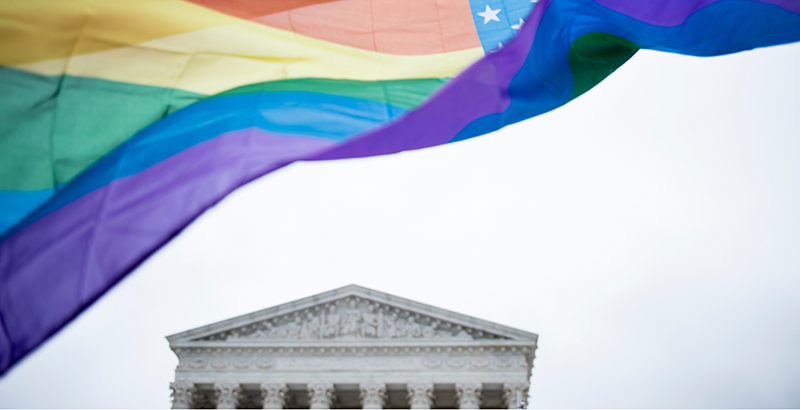 Two weeks ago, the Justice Department doubled down on its efforts to provide license for anti-LGBTQ discrimination, and it made a gay teacher its target. The department filed a “statement of interest” in a Superior Court case in Indiana in defense of a Catholic school’s right to fire a gay teacher who is married to another man. The school’s right to “expressive association” with others in pursuit of a common goal — in this case, Catholic doctrine — the department argued, puts its decision outside the jurisdiction of the courts.

This is yet another salvo in an ongoing attack on efforts to prevent discrimination against LGBTQ adults and students in K-12 schools. The government is coming at this issue from several directions, all designed to make it safe to discriminate against LGBTQ people in schools — and easier to use taxpayer dollars to do so. A week before its action in the Indiana case, the department filed an amicus brief in Espinoza v. Montana Department of Revenue, a Supreme Court case to be heard Oct. 7, arguing that the Constitution requires states to make public funds available to religious schools.

The U.S. Department of Education has also been busy. Secretary Betsy DeVos has rolled back guidance designed to protect transgender students from discrimination; proposed changes to the department’s Civil Rights Data Collection that would erase sexual orientation, gender identity and gender expression from the record; and refuses to enforce federal law prohibiting the use of public money to pay religious agencies for tutoring, special education services and student mentoring.

On top of these actions, three workplace discrimination cases — R.G. & G.R. Harris Funeral Homes v. EEOC, Altitude Express v. Zarda and Bostock v. Clayton County, Georgia — that will be argued before the Supreme Court on Oct. 8 threaten to strip away federal antidiscrimination protections for LGBTQ people. The Trump Justice Department’s position in these cases is an about-face from just three years ago, and its arguments are chilling. In Altitude Express and Bostock, for example, the government argues, “An employer who discriminates against employees in same-sex relationships thus does not violate Title VII as long as it treats men in same-sex relationships the same as women in same-sex relationships.” In other words, it is fine to fire married gay teachers as long as you also fire married lesbians.

LGBTQ teachers in many states already live in daily fear of losing their jobs. Consider the first thought of Shanna Peeples, 2015 National Teacher of the Year, when she learned about the honor: “Well, they can’t fire me now.” As an out gay educator in Texas, which does not protect LGBTQ people from discrimination, she had lived with a deep sense of jeopardy for the previous 15 years of her career.

The current assault on protections for LGBTQ people in our schools is painful enough in itself. But it is all the more devastating in light of the damage it could do to school climate, and the ways it could undo progress made toward healthier school communities for all children.

Since the 1990s, the Safe Schools Movement has done what some said would be impossible: significantly reduce routine name-calling, harassment and victimization of LGBTQ people in schools. Brave LGBTQ educators and students have been at the heart of this movement, working with allied students, parents and teachers to ensure that schools provide educational opportunity and engender respect for every individual who walks through their doors, regardless of sexual orientation, gender identity or gender expression.

Their efforts were part of a national focus on ending the daily victimization of students, bringing together educators, government agencies, businesses and concerned community members to address the problem. Between 2005 and 2016, the percentage of students reporting being bullied dropped from 28 percent to just over 20 percent nationally, and the percentage who reported that their peers were bullied frequently because of their sexual orientation dropped from 62 percent to just over 49 percent.

Children who experience daily harassment suffer in ways that affect their learning, their mental health and their sense of connection to community. Each percentage point of improvement in the fight against discrimination, bullying and stigma represents lives changed.

What made the “impossible” possible? A great deal of individual bravery, compelling testimony and stories from those most directly affected by anti-LGBTQ discrimination and violence in our schools; an unwavering focus on the core purpose of K-12 education: the learning and healthy development of our children; and the daily practice of showing respect for every member of the school community. Ultimately, these approaches resonated deeply — 83 percent of teachers and 87 percent of school-based mental health providers now say it is their job to ensure that LGBTQ students are safe at school.

The actions and arguments of our own government are putting that progress at risk and creating a sense of impunity for people who would harm LGBTQ youth. It is so much harder to build systems that work to solve our common problems than it is to tear them apart. The motivation for the destruction is difficult to understand, and impossible to forgive.

Interactive: See Every Education Issue Prioritized by Governors in 41 State of the State Speeches — From Free College to Mental Health, Early Ed & Beyond