Brown v. Board at 65: Understanding the History of America’s ‘Foundational Test of Racial and Educational Equity’ — Through the Personal Stories of Families Who Took Their Case to Court 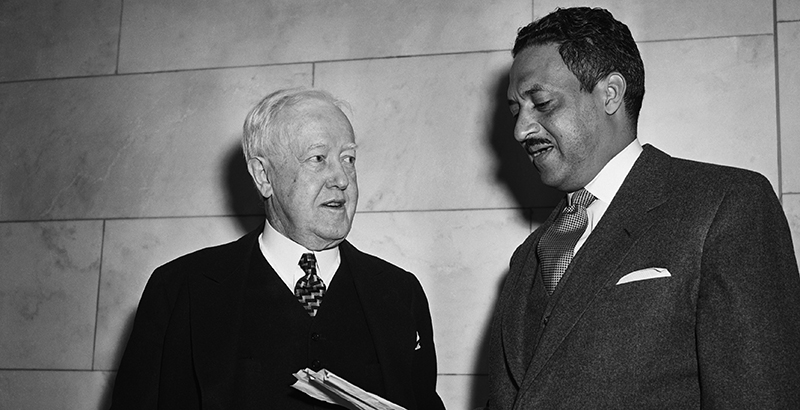 John Davis (left) and Thurgood Marshall argued for and against (respectively) school segregation before the Supreme Court in Brown v. Board of Education. Marshall's arguments succeeded, and he went on to become a Supreme Court Justice. (Getty Images)

In June 1950, Thurgood Marshall convened a conference of the NAACP’s board of directors and affiliated attorneys to determine the next step in the legal campaign to desegregate public schools. After several days of debate, Marshall decided to shift the focus from the inequality of separate black schools to a full assault on segregation. The NAACP immediately instituted lawsuits concerning segregated public schools in southern and border states.

Over the years, historians, political scientists and others have unintentionally participated in a kind of historical erasure. They have unwittingly reduced the story of the effort to end educational inequity by citing only one of five actual cases that petitioned the courts for relief in the 1950s. The NAACP legal challenges to racially segregated public schools were from Delaware, Kansas, South Carolina, Virginia and Washington, D.C. When their cases were unsuccessful in the lower courts, they appealed to the United States Supreme Court. Because each case sought relief from racially segregated public schools, the Supreme Court consolidated these cases under the heading of the Kansas case when issuing its opinion. Their unanimous decision became known only as Oliver Brown, et al. v. the Board of Education of Topeka (Kansas), et al.

These are the five cases that comprise the Brown decision:

By the fall of 1952 the U.S. Supreme Court had on its docket the cases from Delaware, Kansas, South Carolina, Virginia and Washington, D.C., all which challenged the constitutionality of racial segregation in public schools. Only in the Topeka case did the facts show that both the African American and white schools were fairly equal with respect to buildings, salaries, qualifications of teachers and other tangible factors. The issue before the Court was the constitutionality of racial segregation per se — the question of whether the doctrine of Plessy v. Ferguson should be affirmed or reversed. The principle of the 1896 Plessy v. Ferguson case, although it legitimized racial segregation in the area of public transportation, carried over to legitimize racial segregation in public schools.

The cases were argued before the U.S. Supreme Court in December of 1952. Shortly thereafter, Chief Justice of the United States Fred Vinson died. The death of Chief Justice Vinson delayed the argument of the cases until December of 1953, after the appointment of Earl Warren as chief justice. In May 1954, the Court issued its historic decision, which stated in part:

“Today education is the most important function of state and local governments … It is the very foundation of good citizenship. Today it is the principal instrument in awakening the child to cultural values, in preparing him for later professional training, and in helping him adjust normally to his environment. In these days it is doubtful that any child can be reasonably expected to succeed in life if he is denied the opportunity of an education. Such an opportunity, where the state has undertaken to provide it, is a right which must be made available to all on equal terms.”

This decision, written by Chief Justice Earl Warren, was momentous. The social and ideological impact of the decision cannot be overestimated. The decision was unanimous. The issue of legal separation of the races was settled in finding that it violated the 14th Amendment to the Constitution and is therefore unconstitutional. Testimony concerning the effect of segregation based on race was included in the United States District Court for Kansas; and the Supreme Court adopted this language as the basis of its decision, citing the detrimental effect upon children, in particular, when segregation has the sanction of the law.

The Brown decision echoes the words of Justice John Marshall Harlan, who famously wrote in his dissent in the Plessy v. Ferguson decision: “Our Constitution is color-blind and neither knows nor tolerates class among our citizens. In respect to civil rights, all citizens are equal before the law.”

However, the landmark 1954 decision left open the question of implementing a plan for desegregation and achieving educational equity. In 1955, the Court attempted to present a response when it stated rather ambiguously in what is popularly known as Brown II that school districts should proceed “with all deliberate speed” to dismantle the scaffolding of segregation.

In the ensuing decades, many school districts devised tactics to evade, dissemble or outright reject the Court’s mandate. Efforts to circumvent Brown were seemingly legitimized in 1956 when nearly 100 members of Congress, from Southern states, issued what has come to be known as “The Southern Manifesto” or “Declaration of Constitutional Principles.” Their decree encouraged resistance to the Supreme Court decision using any lawful means. Nevertheless, Brown, et al. v. the Board of Education of Topeka (KS), et al. continues to serve as the foundational test of racial and educational equity in this nation. This collection of personal, previously untold narratives reveals the other side of the road to the important 1954 decision. The voices of the actual litigants and their descendants provide a human dimension to the narrative captured in history, political science, legal and other scholarly texts. Here, in these heartfelt stories, this history comes alive.

John Edgar Tidwell is professor of English at the University of Kansas.

Harry A. Butowsky is a professor of History of World War I and World War II at George Mason University. He was formerly a historian and manager for the National Park Service History e-Library website.