Brown v. Board at 65: Joan Johns Cobbs Remembers the Day Her Sister Led a Student Protest That Went On to Change the Course of American History 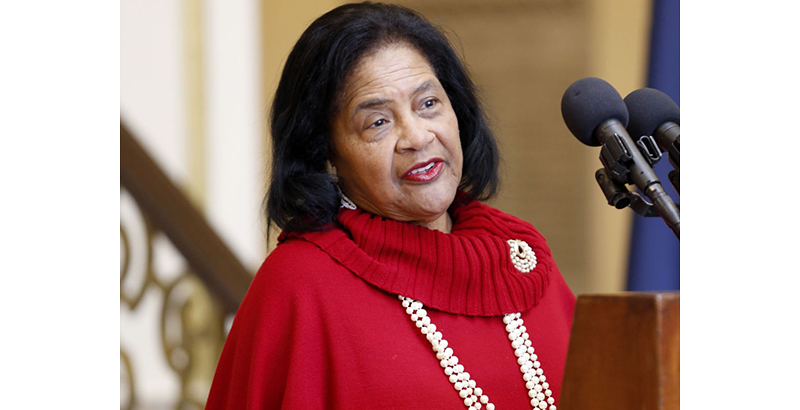 Joan Johns Cobbs. (Courtesy of Recovering Untold Stories: An Enduring Legacy of the Brown v. Board of Education Decision)

I was 13 years old in 1951 when my sister, Barbara Rose Johns, led 450 students on a strike at Robert Russa Moton High School in Farmville, Va. Barbara was a junior at the school, where conditions were deplorable.

Rather than build a new high school for students, the county put up three structures that resembled “tar paper shacks” around the existing building to accommodate a growing student body. These structures were cold and drafty and heated with pot-bellied stoves. The students who sat closer to the stove were too hot and the other students were too cold. During the winter, we often sat in class wearing our coats and boots to keep warm. When it rained, we helped our teachers place pails around the room to catch the water and, at times, opened our umbrellas. We moved our desks around so that water would not drip on our notebooks. We were not comfortable in our classrooms. This was not fair.

We had excellent teachers. They pushed us to excel and demanded our undivided attention. They not only expected us to do well in their classes, but to go on to college to further our education. They even bought many supplies, which — along with science labs, a gym, lockers, and a cafeteria — we did not have.

Barbara confided in her favorite teacher, Miss Inez Davenport. Miss Inez Davenport was one of these caring professionals. She taught music, and was my sister’s favorite teacher. Barbara discussed the conditions of the school with her. Our teacher listened to Barbara and then said, “Well, why don’t you do something about it?” This question surprised Barbara, who said it did not occur to her to seek clarification from Miss Davenport. Instead, Barbara felt dismissed, and eventually devised a plan that she felt was given to her from on high while sitting on her favorite stump in the solitude of the woods behind our house. There, she planned the strike.

April 23 began as a normal school day for me. I had no idea that Barbara, along with other trusted students, devised a scheme to get our principal, M. Boyd Jones, out of the building. I later learned that John Watson, one of Barbara’s co-conspirators, put a call into Principal Jones’ office. Speaking through a handkerchief, he reported that a number of Moton High students were downtown when they should have been in school. Barbara leapt into action as soon Mr.

Principal Jones’ absence struck me first. He did not stand in his usual position which was behind the lectern on stage. Instead, Barbara stood there. It shocked me so that when she began to speak, I slid down in my seat — as low as I could go. She explained to us that the conditions at our school were intolerable and that we needed to strike for a better school. She asked us to please cooperate with her and tell our parents to support us. She made it very clear that this was the only way we would get any results.

When one of the students asked if we were going to get into trouble for this, she replied that the Farmville jail was not big enough to hold all of us, so we should not worry. We followed her out of school that day — and stayed out for two weeks! I was nervous during this time, afraid that our actions would, in some way, bring harm to our family from the white community. Our grandmother told us stories about the Ku Klux Klan, and I worried they would come to our house.

There were, of course, consequences. Stores in town that once offered credit to our parents stopped doing so, which threatened the financial security of our family farm. This was a difficult time in my life. My clothes did not fit, since my mother bought them to last for more than one year. I only had one pair of decent shoes that I could only wear to church. I often went barefoot on the farm.

My mother took a job in Washington, D.C., to help support the family. She worked Monday through Friday, which affected me a lot. I missed her. Barbara was thrust into the role of “mothering” my three brothers and me during the week, a tremendous responsibility for a young girl. In an effort to help make ends meet, she and I often sawed down trees.

Like me, our parents were shocked by the consequences and very concerned. They received threats and decided to send Barbara away to finish her senior year of high school. She moved to Montgomery, Ala., to live with Vernon Johns. He was a civil rights activist, pastor of the Dexter Avenue Baptist Church, and, more importantly, our uncle. Barbara went on to graduate from Alabama State Collegiate Preparatory High School.

After organizing the strike in Farmville, Barbara realized that we were going to need some support. She contacted Reverend L. Francis Griffin, pastor of the First Baptist Church in Farmville. Reverend Griffin recruited attorneys from the National Association for the Advancement of Colored People in Richmond to represent Moton High students. He also opened his church to serve as a meeting place where the community could discuss recent developments in the school court case.

Barbara and fellow student Carrie Stokes wrote a letter to prominent civil rights attorneys Oliver Hill and Spottswood Robinson III from Richmond, Va., to ask for help. The legal duo refused, at first, citing their tight schedules. Barbara was persistent, though. She called Oliver Hill personally, convincing him and Robinson to stop through Farmville en route to another place.

They saw how serious we students were and offered to help if we persuaded our parents to register us as plaintiffs in a suit that would become part of Brown v. Board of Education of Topeka. One-hundred-nineteen parents permitted their children to become plaintiffs in Davis v. County School Board of Prince Edward County.

Barbara was a brave, courageous, and fearless young person who saw an injustice and decided to do something about it. She stood up for what she believed, and her actions on April 23, 1951 changed the course of the nation when the United States Supreme Court declared segregated schools unconstitutional in 1954.

Joan Johns Cobbs is the sister of Barbara Johns, who led a student body strike against segregation that led to Virginia’s Davis v. County School Board of Prince Edward County, one of five court cases that was ultimately consolidated into Brown v. Board of Education.

Joan Johns Cobbs is the sister of Barbara Johns, who led a student body strike against segregation that led to Virginia’s Davis v. County School Board of Prince Edward County, one of five court cases that was ultimately consolidated into Brown v. Board of Education.