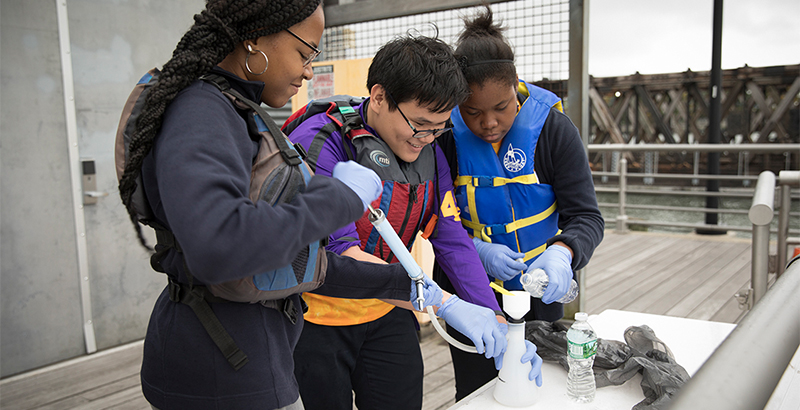 The citizen scientists of Bishop Loughlin Memorial High School stood in the rain, their testing kits at the ready to take samples of the Hudson River’s murky water off Manhattan’s Chelsea Pier. It was a Tuesday afternoon in the fall, and up until today, they had been practicing their technique in the confines of the lab.

Their mission: to assist researchers from Cornell University by collecting environmental DNA from the river that they could then test for the presence of invasive species.

“We’re tracking invasive fish that affect native species and have an impact on the economy and biology,” said Jiaqi Liu, a junior at the Catholic high school in the Fort Greene section of Brooklyn. “And the fact that you’re doing it for Cornell helps you take it more seriously than doing it in lab.”

And this is serious business, explains Donna Cassidy-Hanley, a senior research associate at Cornell Veterinary College.

“The estimated [collective financial impact] that invasive fish of all types and stripes have on Great Lakes Basins in the nation and the rivers, streams, lakes that feed off it alone — including impacts on fisheries, sport fishing, recreation, and tourism — is about $5.4 billion in one year,” she said. “It’s not a trivial problem, it’s a $5.4 billion problem.”

More than a dozen students from Bishop Loughlin’s STEM club participated in the effort with Cornell. The river samples are collected for FishTracker, a student-oriented citizen science project funded by the U.S. Department of Agriculture. The project is designed to detect and map the presence of invasive and endangered species in New York.

Clad in puffy life jackets, ignoring the downpour, the students scooped water from the pier with a Poland Springs water bottle and recorded the GPS coordinates with their cellphones to identify surveyed sites.

The eDNA samples collected by teachers and students are critical for monitoring the range of invasive and endangered fish species throughout New York state. So far, 270 different sites have been sampled by students from 73 schools across the state, including more than 10 in New York City.

“This doesn’t only affect the environment but the economy as well,” Barnett explained. “At one point in the U.S. and Canada, we used to take in 15 million pounds of trout each year, but by the 1960s, with the introduction of the sea lamprey [a parasitic fish that invaded the Great Lakes], that dropped to about 300,000 pounds.”

There are three ways to curb the invasive fish species problem, Cassidy-Hanley explained: prevent their introduction through education; control them through early detection and monitoring; and finally, eradication, which she believes to be virtually impossible.

“Prevention of the other ways that fish can be introduced, like dumping aquarium pets in the water, being lazy about cleaning boats going from one river to another. People aren’t malicious, they just don’t know,” she said. “Education is one way to push prevention. We involve as many kids as we can because we want to create a group of citizen scientists who are aware of the problem, care about it, and know what can be done to help limit the spread of invasive species.”

The students worked in teams of three: one student poured the water through a filter funnel, another student made sure everything is secure — that the pump did not detach from the funnel — while the third used a pump to vacuum out water and collect any eDNA present. They carried out each step with their control sample, a bottle of plain drinking water, then their sample from the river.

Although they had practiced several times in class, collecting samples to send to Cornell’s lab for analysis with Cornell faculty present raised the stakes — and the sense of satisfaction.

“It was great to get experience and do the experiment on our own instead of sitting behind tables and listening to a teacher,” said senior Minh Tran. “It’s a different way to learn, but a better way to learn.”

That feeling of being a player in a critical real-world problem is what the day was all about.

“Everything you do makes a difference, it’s up to you to decide what difference you’re going to make,” Cassidy-Hanley said. “For many of these kids, they don’t want to be window dressing; they want to be involved in the process, and they are. They are a key part of this real research project, and that’s what we’re trying to do.”