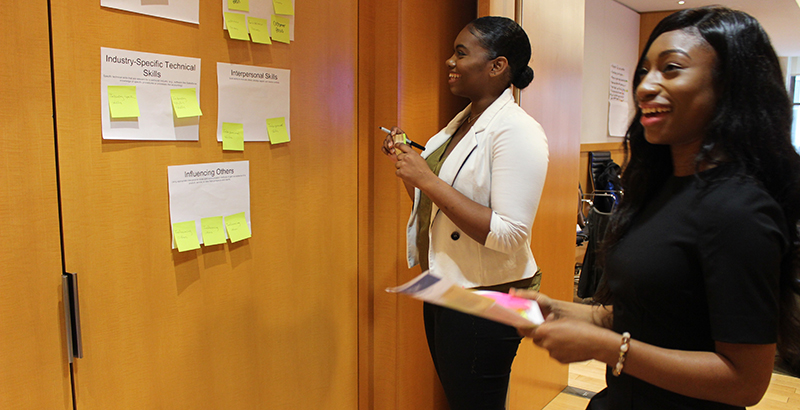 Like most students, Luis Espinosa was terrified by the job hunt looming over his senior year of college. But unlike most students, Espinosa was the first person in his family to graduate from college, and he felt the additional pressure of securing a job as quickly as possible to help support his mother and sister in the Dominican Republic.

After attending a career-day event, Espinosa said he “fell in love” with an investment firm for its work culture and mission. He wanted to work there, but he didn’t necessarily know how.

That’s why Espinosa gives credit for landing his job at that company to the career-finding tools he learned at Basta, a new nonprofit based in New York that connects college graduates who were the first in their family to attend a university with careers. As these first-generation students often come from low-income or immigrant families, they might have spent most of college working rather than taking unpaid internships, or they might have different expectations of what a résumé should include.

“[What] we don’t codify or make transparent to young people around the job search are not complicated topics, but they are really high-stakes knowledge gaps preventing them from accessing jobs,” said Sheila Sarem, founder of Basta.

After years of working in politics, education reform, and human resources, Sarem launched Basta in 2016 to address the lack of diversity in the workforce. It’s a two-person team, but it already has graduated two cohorts of 40 students total, who are mentored both in groups and individually over several months. Ninety percent of the first cohort are in career-pathway jobs, as are 55 percent of the second cohort. 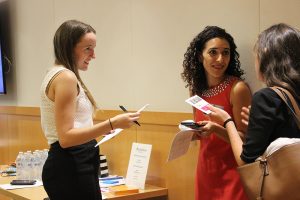 Last week, Sarem stood in a Manhattan conference room to address 32 college seniors and recent graduates who made up her program’s third cohort. “You possess all the things you need [to earn a job] already,” she told them.

Sarem’s ability to bring out the best in students so they can sell themselves on a résumé and in an interview is something Espinosa said launched him into his own career. During their time with Sarem and her colleague, Maggie Raible, students go through exercises to identify their strengths, learn how to build networks to find jobs, and connect with professional coaches who devote an hour each week to imparting advice on everything from the résumé to the interview.

“The things you need improvement in are important to [Sarem], but she specializes in seeing what you excel at,” Espinosa said. “That was crucial in ensuring I could have a job by graduation.”

One key focus for Sarem is addressing misconceptions many of her students have about the application process. One student thought it was cheating to use a connection to secure a job at the company she wanted to work for. Another didn’t put his grade-point average on his résumé because he thought it was considered bragging. A third didn’t think she should mention the full-time job at a clothing store that she held during college because it didn’t sound as impressive as an internship.

“I think people of color, we don’t give ourselves enough credit,” one student said during a group discussion with Sarem. Another agreed, adding that that was why Malala Yousafzai, the girls’ education activist, was her hero. “As a woman, you think your opinion should be muted, and [Yousafzai] really shocked the bounds of that.” 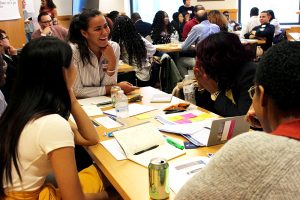 Sarem asked the group how many of the women agreed that their voices felt limited. Most in the room raised their hands.

One said she felt a lot of pressure as a first-generation student to never make a mistake in college and the job hunt. “You have to make up for the sacrifices your family made to get you here,” she said.

But others shared strengths that they felt they gained from pioneering a path to college — resourcefulness, independence, leadership. Those were qualities Sarem said she hopes her students highlight in job interviews.

Students and recent graduates at Saturday’s cohort launch said they’d discovered Basta through college counselors or mentors. All hope the program will help them market themselves better and find connections as they look for jobs as guidance counselors, wedding planners, real estate managers.

“I want responsibility from my job, not just to be a cog in the machine,” said 22-year-old Selena Bailey, who studied international business at Brooklyn College and hopes to go into property management. 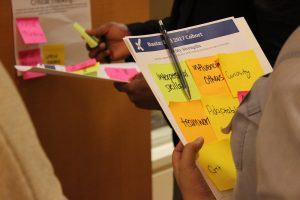 During Basta’s first meeting, students were tasked with finding their career strengths to help them prepare for the job search. (Photo credit: Kate Stringer)

For Nikki Turner, who supports development at KIPP Public Charter Schools, coaching students for Basta was part of a larger mission.

“I fundamentally believe we need to change the face of the workforce and have a more diverse workforce, and it’s really hard for people of color or students coming from underrepresented backgrounds to break in,” said Turner, who received a small stipend for meeting one-on-one with several students every week. “If we don’t have supports to provide access, then we’re doing a disservice.”

One way Basta provides those supports is to present scenarios and let the students brainstorm approaches to navigating an office where they might be the only member of a specific cultural background. What if more privileged co-workers steal ideas and get away with it? What if a team creates an offensive ad and doesn’t realize it? The responses could range from passive to very direct. But some of the students wondered — should they always speak up?

Sarem’s answer to the group was this: The only person who can make that decision is you. You might have landed this dream job after five years of trying, she said. You might be too invested in securing a home mortgage for your family to put your job in jeopardy. But you might also really want to make your voice heard when you see racist or sexist behaviors in the workplace. Ultimately, that decision is yours. 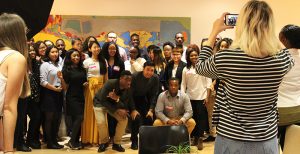 The third cohort of Basta first-generation college students and graduates poses for a group photo during the kickoff meeting in Manhattan on Oct. 14. (Photo credit: Kate Stringer)

The demand for Basta is growing, Sarem said, as 100 students applied for 30 spots in the fall session. She also plans to connect with companies, to receive input from employers and eventually create a talent pipeline.

Basta is an Italian word that means “enough,” a catchphrase Sarem and her friends would use when they were designing the nonprofit and needed to take a break. The name stuck, and in some ways, it’s perfect. As Sarem kept reminding her students, all the power you need is already there.