By John Bridgeland and Roger Weissberg and Matthew Atwell | December 18, 2019 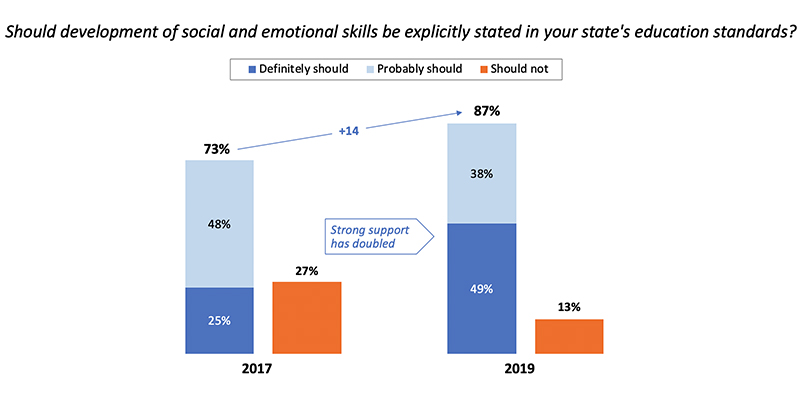 Our cultural, social and political breakdown is fresh evidence that we need to do something different in the education and development of leaders. Some call for more civic education, others bemoan the decline in participation in our religious and civic institutions, and still others reach for solutions they cannot yet define.

The underlying problems we face in our communities and country are becoming clearer. We see the emergence of a culture of scapegoating, blaming and bullying at a time when our nation is becoming more diverse; repeated eruptions in hate-inspired violence; vanishing civic intermediating institutions such as religious congregations, daily newspapers and unions that in previous generations taught us how to work together across our differences; growing isolation and separation of groups into hardened camps; and political dysfunction with a loss of core values and civility itself.

The personal consequences of such a culture are all around us too, with rising substance abuse, anxiety, depression and suicide. This is not the America we know we can be.

So what’s to be done?

In schools across the nation we have visited over the past 15 years, we have started to see a shift in understanding of how children learn and develop as whole human beings and how schools, families and communities partner to support the optimal growth of young people. We hear school leaders talk about creating school cultures and climates where every student is known and counts. We see principals and teachers greeting every student by name at the schoolhouse door and taking responsibility for student success. We also see morning meetings and responsive classrooms where students are at the center of their own development and learning: defining issues, asking questions, marshaling relevant facts and engaging classmates with divergent views in thoughtful conversations.

We see teachers and students working in teams and in small groups, learning not only academic content but also how to work well with others, solve problems, express empathy and share different perspectives. And we have seen hundreds of research studies showing that well-implemented social and emotional learning (SEL) is a booster rocket to nearly everything we already measure in school — attendance, grades, test scores, ability to get along well with others, high school graduation, college enrollment and attainment, and success in work and civic life.

School leadership matters immensely in creating these environments, so we decided to take the pulse of school principals across the nation on how they view the value of SEL, how it is being cultivated it in schools and districts and what they recommend in terms of steps for the future.

In 2017, we learned that the vast majority of principals saw how important SEL was to a wide range of student outcomes. But as seen in our new report, Ready to Lead: A 2019 Update of Principals’ Perspectives on How Social and Emotional Learning Can Prepare Children and Transform Schools, 2019 may represent a tipping point in how America’s school leaders are embracing SEL.

Education standards can spark controversy, and many administrators and teachers already feel overwhelmed by what is required of them, so it was powerful to see a near-doubling of the percentage of principals from 2017 to 2019 (now at 87 percent) who say state standards should explicitly include SEL. We see the same trend unfolding in the classroom, with the number of principals believing that a formal SEL curriculum is necessary for teachers jumping from 43 percent to 70 percent in just two years. Three-quarters of principals, up from about 7 in 10 in 2017, believe students’ social and emotional skills can be accurately measured and assessed; 70 percent, up from 58 percent, believe such skills should be assessed; and 83 percent are using some type of assessment, up from 77 percent in 2017. The voices of principals amplify those of teachers and students who are asking for more SEL in schools.

But the nation has significant work to do to make the promise of social and emotional learning available for all students. One in three principals say their district does not meet any benchmarks for systemic, high-quality SEL — SEL being explicitly identified by a district as part of how it defines student success, the district’s senior leadership speaking knowledgeably and regularly about SEL, the district collaborating with community partners who work with students outside of school hours to support their social and emotional competencies, and more. In fact, only one-third of principals believe their district strongly emphasizes developing students’ social and emotional skills.

Schools in small towns and rural areas continue to lag significantly behind those in the rest of the country. Principals cite a lack of reinforcement of SEL skills outside of school, an absence of funding streams dedicated to SEL and teachers needing more time and training to support students’ social and emotional development as the largest challenges to successful implementation.

Our communities and country are experiencing historic levels of mistrust in each other and in key institutions, and we have lost our confidence in solving big challenges together across our differences in an increasingly diverse nation.

A critical element to moving the nation forward is the cultivation of social and emotional skills in the next generation of leaders; now is the time for each of us to join principals, teachers and students who are pleading for SEL in the classroom.

John M. Bridgeland is CEO of Civic and former director of the White House Domestic Policy Council. Roger Weissberg is chief knowledge officer at CASEL and UIC distinguished professor of psychology at the University of Illinois at Chicago. Matthew Atwell is senior research and policy analyst at Civic.

Roger Weissberg is chief knowledge officer at CASEL and UIC distinguished professor of psychology at the University of Illinois at Chicago.

Matthew Atwell is senior research and policy analyst at Civic.