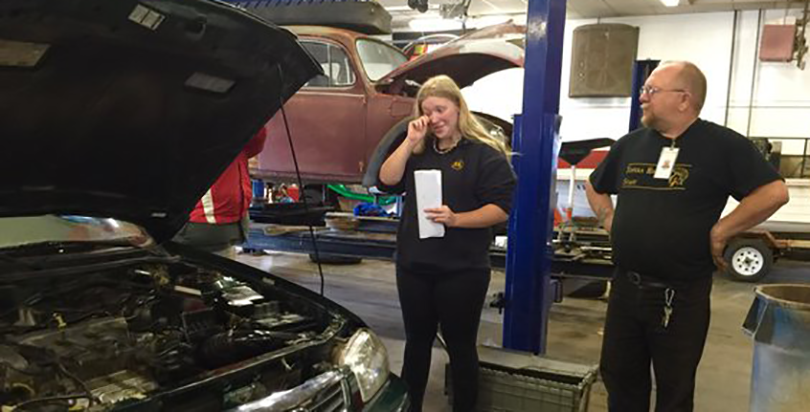 This article is one in a series at The Seventy Four which profiles the heroes, victories, success stories and random acts of kindness to be found at schools all across America. Read more of our recent inspiring coverage at The74million.org/series/inspiring.
Topeka High School senior Brianna Henderson has taken automotive classes with teacher Dean Fairweather since her freshman year.
In fact, after she gave birth to a baby boy her sophomore year, Fairweather agreed to hold her spot in his class during the nine weeks that she stepped away from school.
Since returning to class, Henderson has excelled at her automotive studies and is now on track to graduate in May with both a high school diploma and an associate degree conferred through a program with a local community college.
Henderson has been accepted to Ranken Technical College in St. Louis and plans to attend in the fall.
There’s just one problem: St. Louis is five hours away, and her current car, a 1996 Pontiac Sunfire, is on its last legs, needing costly repairs to return it to a safe and reliable status.
For a high school student taking care of a toddler, that expense is one she simply cannot afford. Which is why last week, Fairweather gave his student his 2000 Mazda 626 — a slightly newer used car that’s only in need of a minor tune-up.

“This was a complete surprise,” she told The Topeka Capital-Journal. “I wasn’t expecting this.”

Fairweather himself had received the car as a gift from his father-in-law, who thought it might be a good way to train students. But the car, despite being in good enough condition to drive, is a bit old to be training high school students on the latest in car repair.
That’s when he thought of Henderson, and paying it forward.
"Brianna was a really good cause that needed a good car," Fairweather told WIBW.
Henderson plans to become a certified automotive technician and to own her own repair shop one day. When she does, she’ll have a generous teacher to thank.
“Mr. Fairweather is awesome,” Henderson wrote on Facebook. “I honestly wouldn’t be where I am without him pushing me along the way.”
Submit a Letter to the Editor
December 9, 2015