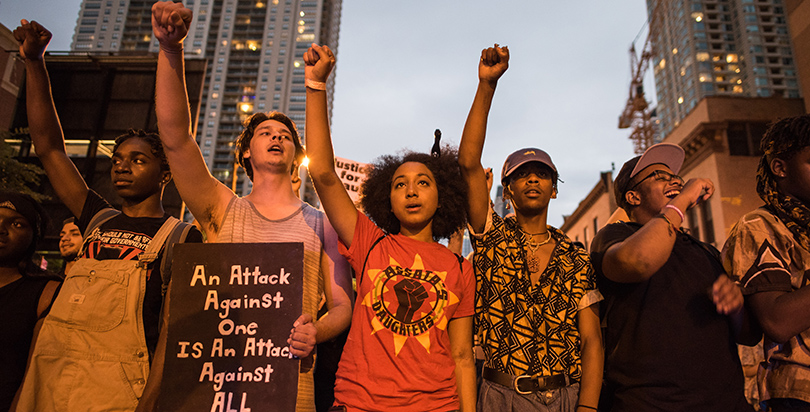 There is one question sharp in my mind this summer: Can education reformers get right with the Black Lives Matter movement?

Despite the movement’s more prominent education change leaders — voices like DeRay Mckesson and Brittany Packnett — whether there is common ground on issues of school quality remains to be seen.

Take the recent repudiation of many of the reform movement’s key planks by members of the Black Lives Matter coalition. The timing of the release—on the heels of the NAACP’s misguided call for a charter moratorium—would seem to confirm coordination and contempt for much of what reformers stand for.

But, in the rejection of public charter schools in particular, there are two questions Black Lives Matter activists need to consider as they branch out into issues besides policing.

(The 74 Newsletter: Sign up for breaking news and daily analysis)

The first one may be the most obvious. Black Lives Matter is a protest movement, one about giving voice and visibility to people seeking redress from our government and its institutions. So why would it be against charter schools? What is choosing a charter school if not an act of protest, of rebellion? What is a wait list for a quality school if not a parent’s public demonstration for excellent education? What is a charter lottery if not a march on the oppression of schools that don’t work?

Being anti-charter is being pro-submission. As a parent of color, if you knew the act of not picking—of submitting—meant your child was going to receive a subpar education, why wouldn’t you resist? Any of us would.

More important for Black Lives Matter activists: Why would you be against someone’s right to do just that?

The dissonance of a protest movement asking people not to protest might be jarring, but it’s not the most disturbing thing for Black Lives Matter to consider on charter schools specifically. Though protest is important, protest is ultimately about people seeking that most important of all institutional quantities: trust.

In the case of law enforcement, when people don’t think they can trust the police, they cannot be policed. It’s safe to offer that policing policies and actions across this country have put that trust on trial and in doubt. And trust may indeed be a casualty of a broad unwillingness to be honest about how the government’s agents of order deal with people of color. If you can’t trust the government to police you fairly, then everyone has a problem.

So, then, question two: If you can’t trust the government to keep you safe, despite Black Lives Matter activism, why would anyone expect that same government to adequately educate you?

Given Black Lives Matter’s premise—that the government systematically acts in a way that undermines trust in both the police and in order—you have to wonder why, if the movement’s members approach the police with such skepticism, they are now asking parents to put all their faith and confidence in schools that have failed them for decades. If the government acts in ways that are systematically racist and unfair, why would it do so in only one arena? The challenge for parents is not a lack of trust in the government’s ability or desire to keep their children alive and safe or to educate them; it’s in trusting the government to do any of those things at all.

In the context of public charter schools, parents are actually being empowered to hold the government accountable in ways not available to them in any other segment of our society. Whereas a rogue police officer can execute a person of color for no good reason and pay no real penalty for the action, charter schools are empowering parents to be their own judge and jury on the education of their children, and allowing them to do so on their own timetable. While Campaign Zero’s policy goals grind away at the system with the broad hope of action someday, public charter parents are acting on behalf of their kids right now.

Which raises perhaps the most important question of all: Is it better to hope you get your freedom, or to have it in your own hands where you can act on it presently?

The police have a great deal to do to institute the kinds of changes that Black Lives Matter wants to see for people of color. Our schools do too.

When we can trust both of these institutions, we can be without both Black Lives Matter and chartering. Until that day, every parent of a child of color in this country needs and deserves both.

Submit a Letter to the Editor
September 6, 2016