Bradford: Teachers Are Hugely Important. But I’m Not Only Against the Strikes in L.A. and Other Places, I’m Hostile to Them. Here’s Why 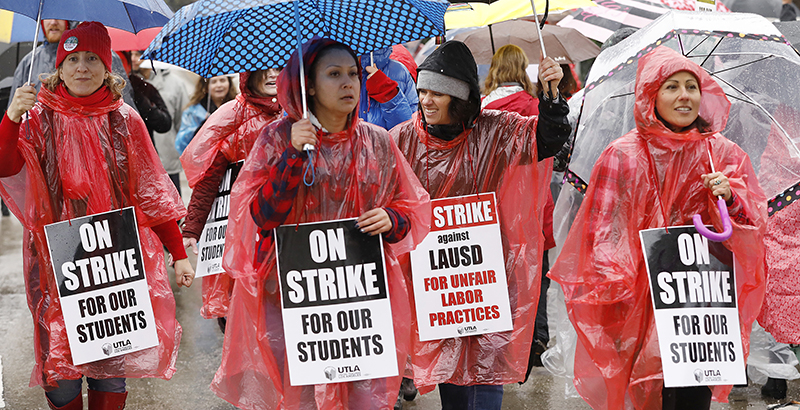 Polling says Americans are sympathetic to the series of teacher strikes — or job actions — that started with the Chicago Teachers Union, picked up steam again last year in Oklahoma and Arizona with their #RedForEd protests, and is now disrupting the Los Angeles Unified School District. I can understand why. If there is one thing the most milquetoast anti-charter/choice/reform status quo-ist and the most hardcore blow-it-all-up reformer agree on it’s that great teachers, and those capable of delivering great teaching, are among society’s most important professionals. We also agree they’re engaged in shaping the next generation of leaders, thinkers, and citizens of our shared democracy.

To restate: Teachers matter a ton.

But that’s also about where the overlap ends, given everything else that goes into the recruitment, training, deployment, compensation, and evaluation of those who engage in the profession. And, given the emerging propensity for teachers to strike — as happened in Los Angeles, America’s second-largest school district, Monday morning — there may be one other thing about which we also disagree: the strikes themselves.

I’ll make it clear where I stand. I’m not only against the teacher strikes. I am hostile to them.

Some people I respect have made the compelling case that striking is the last thing teachers want to do — though the more teachers strike, the less inclined I am to believe this. Like every tactic of last resort, once it’s done, it becomes easier to do again. Think of it as President Trump declaring a national emergency to build his border wall. Does anyone think that once this is done, he, or those who follow him, won’t use the same tactic in the future?

But this is incidental. I’m against the strikes for two reasons that are unique to teacher strikes irrespective of the claims, desired outcomes, or perceived worthiness of the strikes themselves, or their overt or covert intention to strangle charter schools and choice competition so local teacher unions can maintain the exclusive right to supply educators in a monopoly system.

The first is that the relationship between teacher unions and the citizenry is different from that of all other public employee unions because public education is a compulsory command of the state that requires either money (tuition) or expertise (homeschooling) to circumvent. If you don’t send your kid to an assigned public school, you get a summons. Which is also to say, you can be hauled into court for truancy if your child does not attend. Early in my career, I watched families in Camden, New Jersey, serially called to court for keeping their children out of the city’s public schools because they feared such trivialities as gang attacks and sexual assaults. Failure to attend meant fines. Failure to pay the fines meant jail.

No other union has a relationship as intimate — and entangled — with the people it serves. Fire is a ravenous beast, but no modern city is on fire all at once. Conversely, if a teacher union decides to remove its members from the classroom to extract some monetary or political price, millions of people can be affected, particularly in the country’s largest school districts. This relationship — compulsory attendance at large scale and monopoly supply — gives teacher unions, irrespective of what their members as a whole may believe or desire, the power to disrupt life at levels other public unions simply can’t. It’s the public-sector equivalent of every bank deciding it won’t give out money or facilitate transactions for the foreseeable future. Everyone is affected.

But this relationship between striking teachers and all the parents and kids in a district where a walkout occurs doesn’t affect all families equally. And this is perhaps the more important reason to oppose the strikes, whether or not you are “ride or die” for organized labor.

In every shutdown, there are people for whom it is an inconvenience and people for whom it is threatening at a deeper level. And, as with everything in America, poor folks represent the bulk of those constituting the latter. For all the talk of raising the minimum wage, childcare is expensive, especially if you’re low-income. When you can’t send your children to school, you have to pay someone to watch them at home, a crippling expense when it comes out of nowhere. And that assumes you can even get childcare when a strike puts thousands of families in the same situation.

If you’re a low-income parent and can’t find a sitter, you’re really in a bad way. Maybe your employer lets you bring your kid to work … or maybe not. Maybe you have enough vacation time to stay at home, but maybe you don’t. Maybe you are an hourly worker and neither of these is possible, and staying at home to watch your kid means you won’t make rent, or the next time you show up to work someone else is doing what you used to do.

Teacher strikes could have the upside of improved salaries, health insurance, and even pension benefits (that states can’t pay for on fantasy paper, let alone in reality) for educators, great or otherwise. Supporting them might make you feel awesome about labor, or sticking it to the man, or opposing the big, bad forces of privatization (though it’s worth noting charter schools, and certainly private schools, are normally open during these strikes). But they also have the downside of taking hostage low-income families, who already don’t have a lot of leverage, in a political fight that they, for the most part, can’t opt out of.

Elections have consequences, and strikes do, too. Let’s not forget all the families who have more than their kid’s education on the line the next time a National Education Association or American Federation of Teachers local decides it has a point to prove.