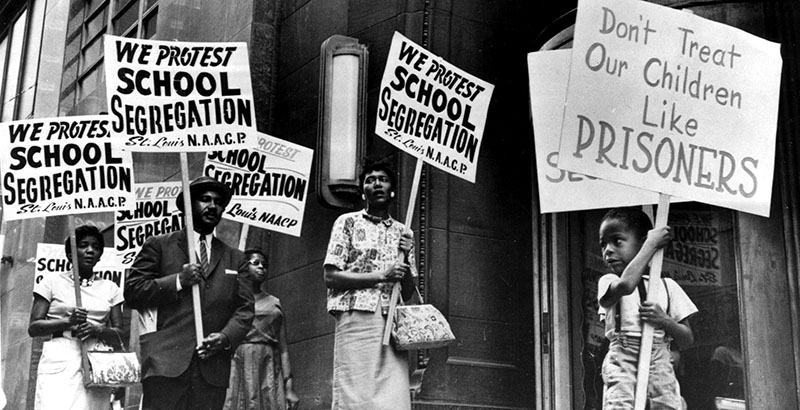 Demonstrators picket in front of a school board office in protest of segregation in St. Louis, Missouri, in the early 1960s. (PhotoQuest/Getty Images)

It’s never been cool to be a racist, but now may be the easiest time, at least in my memory, to be one in America. The pungent mix of social media flippancy and a shift in the nation’s politics toward two largely white constituencies (the Rust Belt’s disaffected and dislocated, and the coastal progressive elite) has wrecked the walls that used to keep hate, fear, distrust, and malice against minority folks at least tolerably private.

Go for a cookout, a Stanford employee calls the cops on you. Go to sleep in your dorm, and a Yale grad student hits up the campus police. It seems like racial animus that used to express itself as angry sidelong glances has metastasized into something wholly other. These are dark days for race relations in America, for sure.

Which is why it’s so interesting that many on the political left and the progressive left — and the progressive anti-charter-and-choice left in particular — are going all in for school integration at this moment in time. In an era of college campus safe spaces, Twitter pile-ons for real and perceived racial insensitivity, and social and political mores that are ever more fragile, one wonders why the notion of sending minority students to classrooms filled with the children of white parents who seem to dislike them greatly has captured this group’s policy-setting imagination.

There may be many reasons for this. Some of them may be laudable. But the most likely is also the most disappointing.

For decades, the traditional public school lobby argued that poverty was intractable and had to be erased before schools full of poor kids could be expected not to perform poorly. It was a powerful argument, not just because it made emotional sense, but because it deflected all blame from the schools and onto the external conditions of economic distress, while making solving poverty a precondition to improving education.

This argument worked wonders for decades in part because poverty has been a human issue ever since we invented the concept of wealth — it is as old as we are and will exist as long as we do — and partly because the very same folks charged with producing great schools for low-income kids were either unwilling or unable to do so. So there was little evidence to counter this canard. This era of spending our way out of the problem catalyzed some of the nation’s most famous adequacy lawsuits, like the Abbott line of cases in New Jersey or the Campaign for Fiscal Equity litigation in New York that saw huge increases in urban public school spending in particular along with widely mixed results.

But after years of asserting that schools perform poorly because “the kids are poor,” these same folks were presented with a mountain of evidence, from charter schools and other options, as well as a few unicorn-y school districts, showing that minority kids can and do learn at high levels regardless of the economic circumstances of their parents. This on top of the long track record of urban parochial schools educating low-income students before and during the charter era.

Faced with proof that poverty is surmountable (if not solvable), many have, instead, sought to move the goalposts and establish a new foundation from which to attack charters and choice, and argue for more money and more time while low-income and minority kids languish in schools that aren’t the right fit. They’ve rallied around a new unsolvable condition that makes emotional sense even as it deflects blame from the schools themselves. And one need only read The New York Times Magazine or watch videos of white parents on New York’s Upper West Side arguing about attendance zones to know that the issue is nothing other than integration, or the shocking lack of it, in American public schools overall.

It’s brilliant if you consider the conditions the construct creates, almost all of which are irreconcilable or incomprehensible. On the one hand, it argues to the better angels of white Americans even as they enjoy a segregated system — through housing policy, attendance zones, and selective admissions — set up for their own benefit. It asks them to give these advantages up for … the greater good? This seems unlikely.

In a time of heightened racial divisiveness, it also forces choice, and charter supporters in particular, to argue “against” school integration because it will, coincidentally, bust up schools full of high-achieving black kids that unions and progressives seem to dislike. What’s accepted in this notion is that if something is predominantly black, it must also be predominantly bad. Even the discussion affirms how little the anti-choice crowd thinks of the agency of black parents and the achievement of black students.

And, lastly, the integration gambit requires that we suspend our belief in one of humanity’s most important and far-reaching inventions: math. There are few places where the mathematical mix necessary to achieve whole-scale school integration — where all schools match the makeup of the attendant district — is possible. In New York City, for instance, a hotbed of the pro-integration anti-choice sentiment, only 15 percent of public school students are white, and they are concentrated in a relatively small number of schools, creating a de facto second system. Proposals to add small numbers of low-income or low-achieving children of color to these schools have divided the city — and white folks, specifically.

These efforts would, at most, expose only a handful of children to “the benefits” of integration, which is ironic given that many argue against charters and choice precisely on grounds that the lotteries and income limits that govern the programs mean their benefits won’t reach all children. The orientation of this approach is, however, inverted and, thus, not do-able. The quantity that in truth should be rationed here is not exposure to white students, but the white students themselves, as they are actually the system’s minority. It would be easier to randomly assign 15 percent of students to spread this benefit equally than it would be to give a handful of minority students this same “benefit.” But if you believe integration advocates will support a plan to randomly assign the city’s white students equally across all schools, I have a bridge to sell you.

And this says nothing of American demography overall. By 2045, the U.S. will be a minority white country, if population trends continue. Betting on integration as the salve de jour is like betting on TiVo back in the day; it didn’t matter how good the idea seemed, the future was streaming and there was nothing anyone could do to stop it.

It’s hard to argue that an integrated society isn’t a better one or that diversity doesn’t set the conditions for a richer American experience. But that’s not what’s being argued by the anti-choice pro-integration lobby, who have described choice reforms as polite cousins of segregation while attacking high-performing charters founded to serve minority kids for being filled with them. The rhetorical points sound good, but there’s no “there” there. And, most important in the attack on high-performing schools of choice for minority kids, they show that integration and achievement aren’t really the endgame at all. This is instead an exercise to mint a new set of excuses so decades of current progress can be unwound. We should fight such “clever” arguments with all the will and skill available to us.