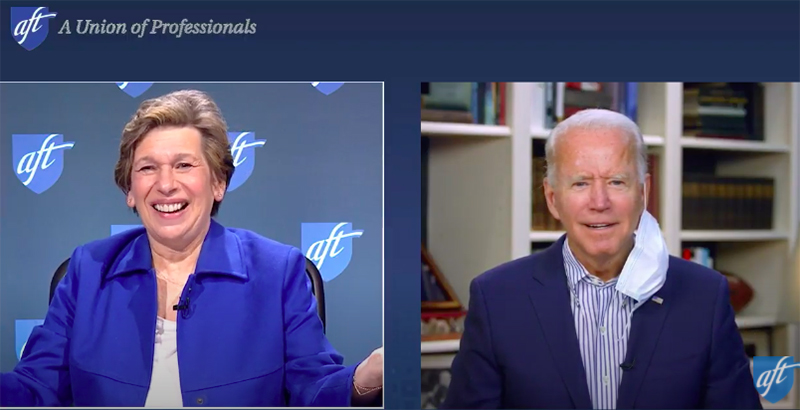 Joe Biden highlighted his education and economic recovery plans and slammed President Donald Trump’s handling of the pandemic Thursday, the final day of the American Federation of of Teachers’ three-day virtual convention.

Joining the Zoom session with a mask hanging from one ear, Biden addressed AFT members a day after the union endorsed him for president, with almost 90 percent of the union’s delegates voting in favor of him as the nominee.

“We have to get you an AFT mask,” AFT President Randi Weingarten told the presumptive Democratic presidential nominee.

Responding to questions from a nurse in Ohio, a special education teacher in Brooklyn and a special education classroom assistant in Philadelphia, he touted how his Build Back Better agenda would address what Weingarten has called “three intersecting crises” — the pandemic, racial inequities and the current recession.

Before his talk, Diane Ravitch, a former assistant education secretary in the first Bush administration and a vocal critic of many education reform efforts, laid out what she was hoping to hear from Biden.

Highlighting his role during the Obama administration in getting federal recovery funds to states and school districts during the Great Recession, Biden called the Republicans’ current relief plan “out of touch.”

“We have to make sure the states and local governments get funding they need to prevent teacher layoffs,” he said. “You have a Republican leader in the Senate saying let the states go bankrupt. How does that help anyone?”

Biden said Trump and the Republicans are using funding as a “cudgel to force schools to reopen” and said Trump wants funding contingent on in-person learning because it’s “a way to make sure he looks better.” Local communities, he said, should decide when it’s safe.

Biden said he would fully fund the Individuals with Disabilities Education Act; he also touched on other aspects of his K-12 plan, including tripling Title I funding, providing student loan relief for educators, and increasing the number of counselors, social workers and other mental health professionals in schools.

He also squeezed in his child care and early education plan, which includes universal pre-K for 3- and 4-year-olds, child development experts based out of pediatricians’ offices, expanding home visiting models, and funding for child care facilities. “The cost of child care is astronomical,” he said, adding, “We don’t pay child care workers nearly enough.”

His 10-year, $775 billion proposal, he said, would include career ladders for early education providers while also helping mothers stay in the workforce. “It increases economic growth,” he said.

Marguerite Ruff, the Philadelphia educator, focused her comments on George Floyd and racial injustice, noting that her son was murdered. She asked Biden what he would do to address racism, including in education. He said he has a plan to support small minority businesses and to create more diversity in the teaching profession. “We’ve got to expand the pipeline of educators of color,” he said, adding that students “are more likely to stay in school if they have someone in the classroom like them.”

Biden also mentioned the deaths of two of his children — his daughter in a car accident, and his son to cancer. “The only way to deal is to get up in the morning and have a purpose,” he told Ruff.

In responding to Rick Lucas of the Ohio Nurses Association, he spent a good portion of his talk slamming Trump’s handling of the virus and getting supplies to hospitals and schools.

“I don’t know what this guy’s doing,” he said, suggesting Trump doesn’t have a “clear plan for the vaccine” once it’s developed and approved. “Millions of lives will depend on it.”

He called for regular reports to Congress from independent scientists on the effectiveness of a vaccine, suggesting that some people, already wary of vaccines, won’t trust what Trump says about it.

Biden’s Zoom appearance followed Weingarten’s conversation with Ravitch and two AFT affiliate leaders. Ravitch encouraged AFT to “ward off efforts to try to turn public education into a tech enterprise,” but said that if virtual learning has to continue because of the pandemic, she hopes it will be “real school and not pretend school.”

She also said she hoped a Biden administration would not be “a rerun” of the education policies that shaped the Obama administration, such as tying teacher evaluation to student test scores, supporting the growth of charter schools and emphasizing high-stakes testing.

“That’s the new vision,” she said, “and I’m hoping the union will be the active force in bringing that vision to the Biden administration.”