Bharwani: This 14-Year-Old Just Published Her First Alexa Skill. She Used to Think She Wasn’t Good Enough. Now She Knows She Is Exceptional 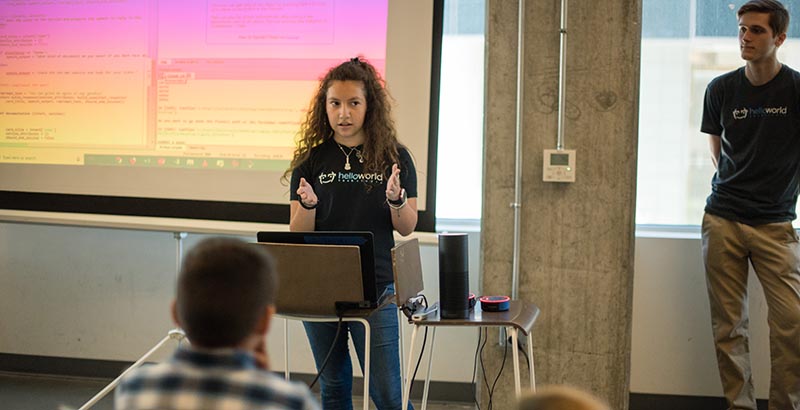 Suguey Carmona, a ninth-grade Latina student at KIPP Brave High School in Austin, Texas, published her first Alexa Skill in the Amazon Appstore this year. This was a notable achievement, but if you don’t know what it means, you are not alone.

Alexa is a virtual assistant developed by Amazon that responds to users’ questions. If you want to ask Alexa to do specific things, such as power up your Xbox or order a pizza, your Alexa has to have that skill. Suguey identified a skill that had not yet been created, so she decided to program it herself. She created an Alexa Skill that allows English- and Spanish-speaking immigrants to get answers to questions related to their rights. For example, users may ask Alexa, “Am I allowed to get my driver’s license?” or “How long does it take to get a visa?”

The idea sprang from Suguey’s personal experience. When she saw her own parents struggle to find answers about their rights, she decided to take matters into her own hands.

There is no doubt that this new Alexa Skill will help others, and that Suguey, at age 14, is well on her way to becoming a key influencer. The ability to design an Alexa Skill from scratch is something most developers do not learn until after college. The project required her to diagram and model immigration-related conversation outcomes and translate her model into programming logic. Suguey also engaged with sophisticated programming capabilities, such as learning about data infrastructure and management, how to translate code from one language to another and how to run code on remote servers. She was able to build her Alexa Skill through Hello World, a K-12 computer science program based in Austin, Texas, and San Francisco, that allows students to learn computer science skills that aren’t taught in the average classroom.

Hello World seeks to empower young students with the computational thinking and problem-solving capabilities to better navigate the growing high-tech industry. By working directly with tech professionals and connecting them with students, we hope to prepare the next generation of leaders in this space. And, perhaps more importantly, we’re working to empower female and minority students through mentorship and learning opportunities in emerging computer science fields.

The continuing underrepresentation of students of color and women in technology is a known issue of staggering consequence. In 2014, Google’s tech workforce was only 17 percent female, 2 percent Latino and 1 percent African American. In 2013, among bachelor’s degree recipients in computer science fields, only 4 percent were African American and 5 percent were Latino. In 2015, fewer than 10 girls of any race took the AP Computer Science exam in 10 states, and not a single African-American student took the exam in nine states, including Mississippi, where 50 percent of high school graduates are African American. Even among African Americans, Latinos and Native Americans who have degrees in science, technology, engineering and math, only 30 percent have STEM-related careers.

Computers are ubiquitous in the daily lives of Americans and those abroad, and shifts in technology directly impact our socioeconomic structures, in terms of how individuals contribute to society and make a living. According to the 2016 World Economic Forum’s The Future of Jobs report, the “fourth industrial revolution” — described as the confluence of technological breakthroughs such as artificial intelligence, device communication on the internet such as smart homes and self-driving cars, and 3-D printing — is transforming everything we experience and understand. And yet these high-tech fields are dictated by privileged and powerful few, undoubtedly leading to significant blind spots and missed opportunities in our talent pipeline. While tackling this challenge at the professional recruitment level is important, more radical measures are needed in K-12 education.

Studies prove that female and underrepresented minority students are more likely than others to experience a lack of confidence in their abilities and impostor syndrome, meaning they believe they have somehow not earned their achievements as a result of their own efforts or skills.

Confidence is not born in a vacuum. Belief that one is capable comes from experiences that affirm that belief, and the more rigorous and aspirational one’s accomplishments, the stronger the fountain of affirmation to draw from. Undertaking a substantial computer science project provides students with tangible evidence that they can do the work in some of the most intellectually demanding fields in our society. But the benefits can extend far beyond that arena; the skills inherent in computer science — identifying and analyzing an abstract challenge or task, breaking it into smaller parts, and developing and testing solutions to solve one piece at a time — are a valuable set of capabilities in quantitative and logical reasoning that can be applied to any endeavor.

While cultural and societal norms continually tell female and minority students that they belong in certain fields or cannot excel at certain tasks, a personal experience that demonstrates the opposite can be life-changing. This is what happened with Suguey. She used to think she wasn’t good enough, and now she knows she is exceptional. This experience will serve as a continuous reminder that she can draw upon when faced with self-doubt. The same could — and should — be true for many other students just like her.