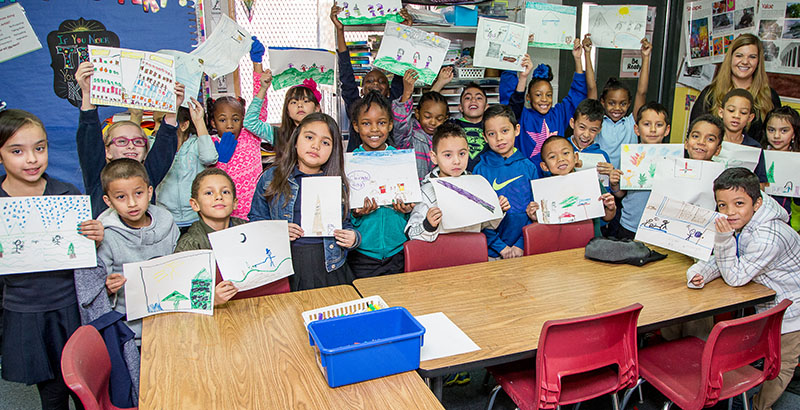 McAuliffe International Middle School will have at least three new staff members this year: another counselor, a full-time psychologist, and a therapy dog.

The additional staff, plus a new wellness center, are part of a fresh emphasis on mental health for the 1,100 students at Denver’s most popular middle school, Principal Kurt Dennis said during a May visit.

The mental health programs, plus renovations to the school’s nearly 90-year-old building, will be paid for by $340,000 newly at Dennis’s disposal for the 2017–18 school year as part of Denver’s innovation schools program.

Denver, nationally known for its portfolio school model, offers a spectrum of oversight models for its schools, from 101 traditional district-run schools to 56 charters freed from most district regulations. The district’s 47 innovation schools, including McAuliffe, land somewhere in between.

“You have a bevy of choices in the Denver Public Schools. Good choices and great options for families is core to our portfolio strategy,” said Jennifer Holladay, the district’s executive director of portfolio management.

A 2008 Colorado law allows school leaders, in agreement with district and state officials, to seek exemptions from some regulations and collective bargaining agreements, as they set up innovative school models. It also gives school leaders more autonomy over budgets.

The innovation setup, which Dennis called the “best of both worlds,” lets him use the support services a big district like Denver offers for the things he would rather not spend time worrying about, like transportation, legal assistance, HR, and food services.

But for “things that really matter,” like staffing, curriculum, calendars, and now budget, he makes the call.

“As a school leader, I can focus on what’s important, but I also have the autonomy to make the decisions that I feel are best for my community,” he said. “I think the district recognizes [that with] 100,000 students in the city of a million people, you can’t centrally control that.”

The arrangement is a stark difference from the school Dennis previously led in the Denver suburbs.

“Everything we did was micro-managed and second-guessed at central administration,” he said. “You’d get handed initiatives or be given directives to do things that you maybe didn’t believe in, or that you didn’t think were best for your community or your staff, and yet you still had to execute it, knowing it was going to fail or knowing that it was going to cause problems or knowing that you didn’t believe in it.”

Choice beyond charters or district schools

The origins of portfolio districts can be traced back to a report Paul Hill wrote for the RAND Corporation in 1990 studying the characteristics that made certain New York City high schools excellent, said Jordan Posamentier, deputy policy director at the Center for Reinventing Public Education at the University of Washington. Hill founded CRPE in 1993.

The first districts to adopt the strategy mostly came to the idea after some big shift, like a natural disaster (think the New Orleans Recovery School District implemented after Hurricane Katrina) or mayoral control of schools, said Shannon Murtagh, a research analyst at CRPE. Now, though, district leaders have seen the strategy’s success elsewhere and recognize it as an option to improve outcomes for students, she added.

(Watch The 74 Documentary: Big Gains in New Orleans’ Schools After Katrina, Big Goals for Next Decade)

Each district sets up its portfolio model slightly differently, but at its root, the portfolio district is based on the idea that students will be most successful when the adults closest to them are empowered to make decisions. It also requires at least some level of school choice, high-quality information for families, and adjustments to schools that aren’t performing well.

In Denver, school choice means more than just charters and district-run schools, and there is an increasing variety of educational approaches within the broader innovation-school umbrella.

Innovation management organizations, like McAuliffe’s, run two or more schools under the supervision of an executive principal who can pool resources across campuses but still reports through the district leadership chain. Dennis opened a second campus in 2016–17 with a sixth-grade class.

Innovation zones elsewhere have been used as a school turnaround strategy, but that’s not the case with the Luminary Learning Network. Each falls into a different category on Denver’s five-tiered school rating system. They have different focuses academically and serve different student populations.

“If you walk into an LLN school, you will not see consistency among the four, but what you will see is that they have additional resources and additional autonomy over how they use those,” said Jessica Roberts, the network’s executive director.

Each is using its additional budget, which worked out to about $460 per student, or about $200,000 more for each school, in different ways, too. One school has students with severe medical needs, so it hired a nurse. Another chose to invest in project-based learning.

The network also changed the relationship between school principals and the district. Previously, instructional coaches were in charge of both assistance for and evaluation of principals, a situation Roberts said made the coaches simultaneously good cop and bad cop.

“People weren’t getting great coaching out of their instructional superintendent for fear of, ‘OK, well, if I tell her about how I’m struggling with this, I’m going to do bad on my evaluation,’ ” Roberts said.

Now, the instructional coach just coaches, while Roberts and a team of outside experts do evaluations. Each school in the network has pledged to move up one band on the city’s school performance framework within three years, and the school that’s already in the top category overall, Creativity Challenge Community, has pledged to improve specific areas where it isn’t excelling.

Roberts also provides a buffer between the district and principals on compliance issues, giving them more time at school and reducing the number of emailed compliance requests from more than 130 per year to about one a month, she said.

Not every student in Denver will select a charter, and although Denver has done a good job incorporating choice for all students, Roberts said, “we’re still not getting there with every student.”

“We have to be innovative and think about how can we really, from the inside out, execute change,” she said. “This was one way we figured out how to do it.”

Breaking down the bureaucracy

Dennis, the leader of McAuliffe, and Alex Magana, the leader of Grant Beacon, another innovation management organization, considered joining the innovation zone, he said. They decided they had enough regulatory autonomy, though, so instead asked for more budget authority — and they got it.

Allowing principals more rein over regulations and budgets means reshuffling, and sometimes laying off, bureaucratic staff in the central office.

“We’re all aligned and everybody wants to do whatever they can to have positive student results. The big problem is breaking down a bureaucracy and doing things differently,” Roberts said. “It really is just change.”

District officials, though, are embracing that freedom for schools: The budget autonomy that McAuliffe and the Luminary Learning Network schools have will be expanded to all innovation schools for the 2018–19 school year.

Traditional district-run schools may seek some autonomy, too, in areas including curriculum, assessments, and teacher professional development, Holladay said.

“We’re not shying away at all from this idea that school leaders need resources to execute their designs well and get the services they need,” Holladay said. “Empowering our leaders to make decisions at the building level is a core part of the portfolio strategy, too.”

The Denver teachers union sued the district over its moves to create new schools as innovation schools — including McAuliffe —  rather than using the law to convert old schools. Conversion to an innovation school requires the approval of 60 percent of the school’s faculty, and the union had argued it was unfair to hire teachers after the innovation plan had been approved, Chalkbeat Colorado reported. This May, four of the seven members of the state’s highest court sided with the district.

Several schools have applied to join the Luminary Learning Network, which has a three-year contract with the district, and leaders expect to add at least one in the fall, Roberts said. She also expects DPS to do a new call for zones later this year.

Looking forward, the school district will continue to shape its portfolio to try to close achievement gaps, Holladay said.

“We’re a school district where many of our children are still not in schools that are providing the kinds of opportunities that kids need,” Holladay said. “That is the primary driver of continuing both with the portfolio strategy and … innovation in our district more broadly … thinking differently of how we can provide better services to kids as a system of schools, as a family of schools.”