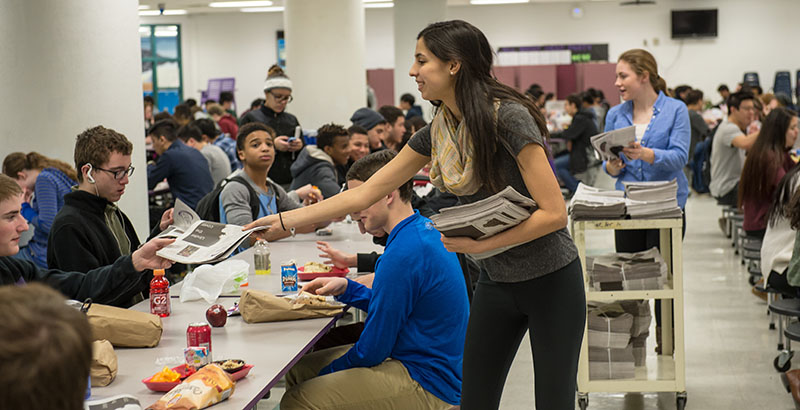 Every day, it becomes increasingly clear that the road to societal reforms is steep and often crumbling. I’d like to suggest one simple action we can take right now that will help pave the way for a more solid, stable future: When students return to school, however they return to school, every one should have some kind of student newspaper.

For years, journalists and scholars have lamented the decline of student newspapers. In New York City, where I live and teach, as many as 900,000 students do not have an active school newspaper. Last year, of the city’s 584 public high schools, only 30 — 5 percent — participated in Baruch College’s annual NYC High School Journalism Conference.

Why the dearth of public school student newspapers? Funding is an obvious reason. Yet in the small, Title 1 Manhattan high school where I taught for two years, I started a modest but enthusiastically received school newspaper in my own English class for far less than it would have cost to copy the typical volume of daily handouts (and the inevitable makeup-work packets). A simple online school newspaper (such as those profiled by Mark Keierleber in The 74) might actually be one of the most affordable programs a school can undertake, not to mention one of the best ways, during this pandemic, to ensure that a school community stays informed and engaged.

One highly recommended platform begins at $400 per year and offers a free journalism curriculum, as does the website schooljournalism.org. The Journalism Education Association offers technology and lesson plans, and the New York-based nonprofit I work with, Students Disrupting, is a direct response to the dire need for student journalism in the city. Certain Google products, in addition, are free and simple to use, readily adapted to remote learning and easily shared via social media. (One teacher I know says she thinks her journalism class was the only class not impacted by virtual learning.)

Importantly, as many a newspaper faculty adviser will tell you, journalism shouldn’t be an elective that imposes extra work and demands more of a teacher’s limited time. Rather, it should be a class that every student takes. Just as we’ve decided that students should be taught how to lead a physically healthy life, be an informed consumer and understand how the Electoral College works (or doesn’t), shouldn’t they also learn the ethics of responsible journalism and citizenship, and the value of a free and fair press? An Advanced Placement journalism class would be a worthy addition to the roster of electives like AP Art History, Music Theory, Psychology and Computer Science.

Journalism fits effortlessly into any English Language Arts curriculum, teaching all the mandated subject skills as well as real-world abilities like meeting deadlines, checking facts and assuming responsibility for yourself and for others. There are also the invaluable rewards of seeing your name in print and knowing that your work served some greater purpose; that it was practical as well as personal; that your voice is valued and heard.

Student journalism lends itself to personalized learning and critical thinking, and research shows that “students who take journalism … get better grades in high school, score higher on the ACT and earn higher grades as college freshmen.”

There is no reason why 9 out of 10 of the “best” public high schools in New York City should have student papers while 90 percent of the others don’t. Or that while 23 private schools in the city were members of the Columbia Scholastic Press Association in 2013, only seven of the city’s public high schools were.

Students are already recording their lives and the world around them on their smartphones; at this critical time in history, they’re more than primed to have that urge channeled into creating news. As we gear up for the unprecedented road ahead — disrupting and dismantling at the same time we rebuild — I hope schools will seize this opportunity to let all students move to the front and take the wheel.

Lara Bergen is a children’s book author, a New York City educator and a former 12th grade English teacher. She serves on the board of Students Disrupting, a nonprofit with a mission of bringing student newspapers to every high school in New York City.

Lara Bergen is a children's book author, a New York City educator and a former 12th grade English teacher. She serves on the board of Students Disrupting, a nonprofit with a mission of bringing student newspapers to every high school in New York City.