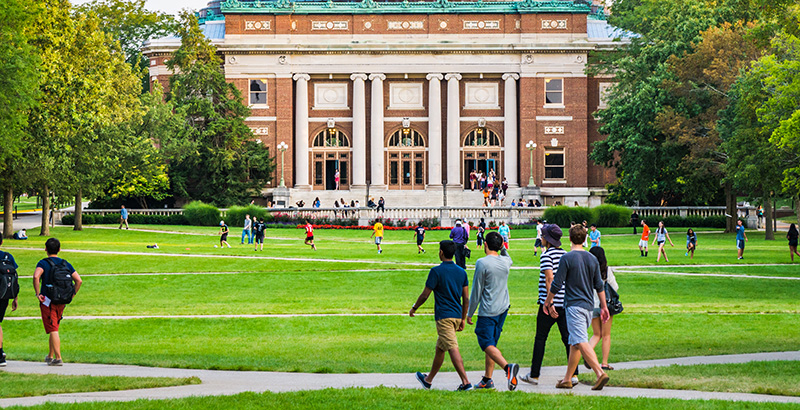 Marathon runners know that getting to the finish line takes careful preparation and constant fuel, especially in the final miles. But school districts have been measuring the wrong finish line in their marathons: It’s not high school graduation, but getting to and through college. To do that, districts need to rethink how they support students, especially low-income students, in the final miles.

Only about 1 in 10 low-income students earns a bachelor’s degree by age 24, and the implications are significant. The earnings gap between young adults with a high school diploma and those with a college degree has more than doubled since 1965, even after adjusting for inflation.

A recent report published by Bellwether Education Partners illustrates how districts, colleges and collaborators across the country are proving that low-income students can get to and through college if given the right supports. In cities ahead of the curve on progress, districts are taking concrete steps by partnering with nonprofits or hiring internal staff to develop coherent and well-resourced college access and success strategies. Now more than ever, despite mounting budget pressures due to the COVID-19 crisis, districts must invest in programming so more low-income students are on the path to achieving a college degree.

Take DC Public Schools. A decade ago, when Kaya Henderson assumed leadership of the district, college enrollment rates hovered around 40 percent. Henderson believed in the importance of college and career readiness and elevated postsecondary support as a priority, putting muscle behind fundraising to fund it.

The district started by creating a small central team, with just two dedicated staffers who set districtwide aspirations for postsecondary success. Over time, the district created a school-based college and career coordinator position to work in tandem with the central team. The people in this role were charged with coordinating with the nearly 70 college access and success third-party programs that operate across the city. Their goal was to ensure that resources at the school level — counselors, afterschool programs and more — were coordinating well and not duplicating efforts. Importantly, this initiative started as a resource-limited, grant-funded pilot at three of the highest-need schools and was later expanded across district high schools, and then moved into the district’s budget based on its success.

Although the approach has not been without challenges, such as maintaining strong practices amid turnover of coordinators, indicators are positive: College enrollment rates jumped 15 percentage points, to 55 percent, over the past five years, and despite the uncertainty of the global pandemic, the district in May launched DCPS Persists to give alumni individual coaching during their first year of college.

In Ohio, Columbus City Schools works in close partnership with I Know I Can, a local college access organization. I Know I Can began primarily by offering scholarships to eligible students, but over more than three decades it has evolved to provide comprehensive services, such as counseling and data tracking, that foster college aspirations and support students as they earn their degree. In a 2018 retrospective, I Know I Can reported that students who received its grants and services had a 41 percent four-year college completion rate, compared with 30 percent of Columbus City Schools graduates who did not have those interventions.

The organization’s long-standing partnership with the district started with one part-time college adviser in a single high school, then broadened to include an adviser in every district high school. Together, I Know I Can and Columbus City Schools have also instituted early college awareness workshops for middle school students and campus-based supports for students already at institutions of higher education.

As I Know I Can evolved from a volunteer organization to a professional nonprofit, it drew from best practices identified by the National College Access Network and other national leaders, giving the district access to top-notch professional development, data collection practices and program innovations. And the work is done in a financially sustainable way: While Columbus City Schools pays a contract fee to cover a portion of the support it receives, philanthropic dollars and strategic partnerships, such as with AmeriCorps, also contribute.

There are many reasons DC Public Schools and Columbus City Schools are outliers. High schools are generally held accountable for academic performance and graduation rates, so many do not see it as their job to support students through college matriculation, let alone completion. As a result, relatively few districts have made college access and success a priority or created multi-year, data-informed plans around this goal. Facing scarce resources, leaders invest in teachers instead of college counselors, or in students’ academic preparation over completion of the federal financial aid form (FAFSA). And the cycle continues, with low-income students largely on their own in identifying how to get to and through college, lacking the road map and support that their higher-income peers have.

It’s time for K-12 systems to boost postsecondary access and success rates of their low-income and first-generation college-goers by making college completion integral to their mission. Students will need this support especially as we face a post-COVID world with tighter budgets, fewer scholarship opportunities and economic hardships, where students may be pressured to forgo college altogether to join the workforce.

Districts must pursue data-driven, well-resourced and long-term strategies that account for individual student needs and local context. College success rates that are on par with high-income peers are within reach — districts now must begin the work.

Lina Bankert is a partner at Bellwether Education Partners, where she leads strategic planning for numerous postsecondary access and success initiatives across the education sector.

Lina Bankert is a partner with Bellwether Education Partners and co-leads the Strategic Advising practice area. Before joining Bellwether in 2012, she was a principal at Bain & Company, where she worked with executive teams across a broad range of industries and capabilities in both the private and public sectors, while building extensive pro bono nonprofit advisory experience with a focus on K-12 education.