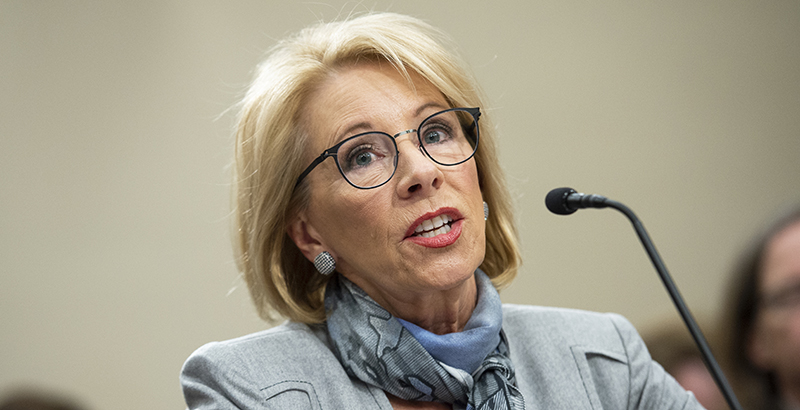 Wyoming and Pennsylvania are different in many ways — geography, industry and politics among them. But as state leaders, we strongly agree on the need to provide all students with the best possible education, despite challenges we may face — including the unprecedented disruptions from the coronavirus. We greatly appreciated the quick action by the U.S. Department of Education to support states and meet the needs of students and families at the beginning of the pandemic by setting up an expedited waiver process for state assessments and allowing flexibility in spending existing federal grants.

But we cannot understand why the department has now decided to discard long-standing practice — as well as the will of Congress — and distribute federal aid in a way that favors private school students over their more disadvantaged peers.

State leaders are not the only ones with concerns. Groups representing district superintendents, principals and teachers have expressed similar worries. So have members of Congress of both parties. The Republican chairman of the Senate Health, Education, Labor and Pensions Committee, Sen. Lamar Alexander, recently told reporters, “I thought, and I think most of Congress thought, that money from the CARES Act would be distributed in the same way that Title I is distributed.”

When Congress passed the CARES Act, providing about $13 billion in emergency relief for K-12 schools, it directed that the set-aside for private school students should follow the same procedures as the Title I program. For decades, districts have used Title I to aid low-income private school students by funding supports like tutoring, technology licenses and professional development for teachers. But soon after the CARES Act passed, the department published non-binding guidance for distributing the funds that strays far from what Congress or anyone in states or local districts understood the rules of the game to be.

The new guidance states that districts must reserve CARES Act funds for private schools based not on the number of low-income students they have but on the total number of students. That would dramatically increase the amount of aid sent to private school students who are not disadvantaged, at the expense of those disadvantaged children who are the intended beneficiaries of these dollars. There could not be a worse time for such a move.

For example, in Philadelphia, this would mean 53 percent more funding going from the most disadvantaged to more advantaged students. In Pennsylvania’s rural Blue Ridge School District, 3,873 percent more would go from the least to the most advantaged. Initial estimates in Wyoming show a similar trend.

We agree with Alexander and others concerned about the new rules, and we struggle to understand why the department does not. Its recent guidance on the distribution of CARES Act funding, as it relates to disadvantaged youth in both public and private schools, deviates substantially from guidance the department issued as recently as last October. And now, DeVos has said her agency will issue a proposed rule in the next few weeks and invite public comment in an apparent attempt to grant its incorrect interpretation more weight.

We believe the department should honor the intent of Congress and long-standing practice and allow for the CARES Act dollars to be distributed equitably, based on the number of low-income students in public and private schools.

To be clear, we and other state chiefs believe that students in private schools should receive support through the CARES Act. What we don’t believe is that aid should be distributed to all students at any private school, regardless of their family’s wealth or the size of their school’s endowment, in the same way as it is for disadvantaged students — particularly when that aid comes at the cost of those less advantaged children.

Throughout this crisis, we have coordinated closely and effectively with Education Secretary Betsy DeVos and her team. Yet, despite many conversations and strong urging from members of Congress on both sides of the aisle, the department has refused to implement the law as Congress intended. We ask the secretary to consider concerns from educators at all levels of the school system and from leaders across the political spectrum, and use the proven calculation of equitable services — by the number of low-income students.

It is the only outcome that ensures funding to the children who need it most. And it is what Congress intended.

Wyoming Superintendent of Public Education Jillian Balow is the president of the board of directors of the Council of Chief State School Officers. Pennsylvania Secretary of Education Pedro Rivera is the past president of the CCSSO board.

Wyoming Superintendent of Public Education Jillian Balow is the president of the board of directors of the Council of Chief State School Officers.

Pennsylvania Secretary of Education Pedro Rivera is the past president of the CCSSO board.