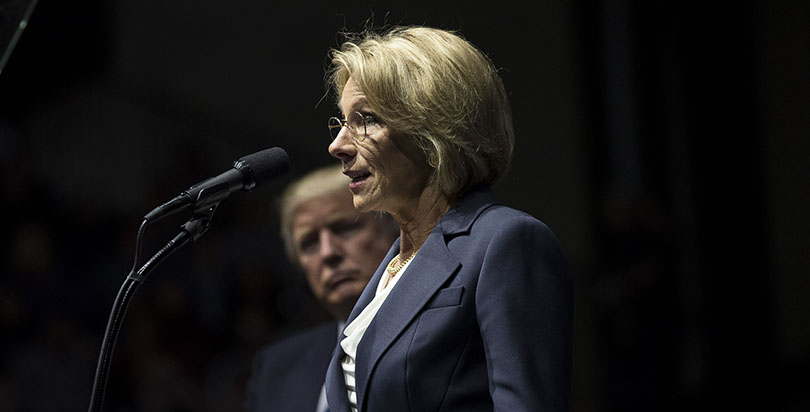 See an expanded version of this article, with additional questions from 10 other experts, right here.
Congressional hearings, particularly to examine controversial subjects or consider high-profile nominations, often serve as much as a venue for legislators to score political points and garner social media mentions as to investigate real, substantive policy issues.

The Wednesday hearing of the Senate Health, Education, Labor and Pensions Committee to consider the nomination of Education Secretary–designate Betsy DeVos is shaping up to be much in the same vein.

So The 74 reached out to education advocates and experts across the ideological spectrum with a request: Given time limits and Twitter-bait-type political concerns for both parties, what are the policy questions DeVos should be asked? The responses range from big philosophical questions like the role of the federal government in education to more granular inquiries about the independence of the U.S. Department of Education’s research arm.

Here, in alphabetical order by questioner, are the queries. Provided in phone conversations and by email, they have been edited slightly for length.

“Eighty percent of Michigan’s charter schools are run by for-profit organizations. For context, the next highest state has only 17 percent of students in for-profit-run charters. A 2015 federal review found an “unreasonably high” percentage of charter schools on the list of Michigan’s lowest-performing schools, and the number of charters on that list has doubled since 2010. Yet even when charters in the state perform poorly year after year, it is nearly impossible to shut them down because you and others have aggressively fought against any reasonable authorization and accountability system to protect students. How would you ensure that for-profit charter schools don’t proliferate nationally, lining the pockets of their owners with taxpayer dollars while providing a substantially worse education to the often-marginalized students that they prey on?”

“You have often stated that you support online learning, including for-profit online schools, in which your husband was an early investor (K-12). The graduation rate for online charter schools is a dismal 40 percent. Why do you continue to embrace learning systems that have proven to be failures and have been associated in Pennsylvania and in California with fraud?”

Burris would also like DeVos to address her donations to Michigan lawmakers who then “gutted a bill that included accountability measures for charter schools in Detroit,” which DeVos opposed. “Why don’t you think that children should also be protected by sound regulations of their schools, especially the for-profit schools of Detroit?”

Cook would also like to know DeVos’s priorities for the upcoming reauthorization of the Higher Education Act.

She would like to see questions on DeVos’s commitment to supporting and strengthening traditional public schools, and how they play a role in school choice.

“A philosophical way to look at that is to say, to what extent does Mrs. DeVos acknowledge that, to date, the conversation about school choice is unnecessarily or arbitrarily limiting, because it seems to not actually include public schools as a viable option?” she said.

Ellerson Ng would also like to see questions about DeVos’s commitment to rural schools and to federal technology programs. The latter are funded primarily through the E-Rate and Lifeline programs, under the jurisdiction of the Federal Communications Commission.

“ESSA [the Every Student Succeeds Act] hands much authority back to the states, though state education agencies are not equally well qualified to make evidence-based policy decisions, analyze their own data or scale up good practices. What does the department plan to do to help states — particularly those that have historically lagged in education outcomes — build the capacity to analyze and learn from their own experiments in order to implement strategies for better educational outcomes in their states?”

Hess is interested in DeVos’s views on ESSA implementation, particularly Obama administration regulations like the proposed supplement-not-supplant spending rule. He’d like to know how much work she sees has yet to be done on ESSA implementation from the federal level, and how important it will be to redo supplement-not-supplant and other ESSA regulations.

Hess also would like to know which Obama administration Office for Civil Rights rulings DeVos finds problematic and what she intends to do about them.

“These are aspects that sit well with a conservative philosophy of choice, where the federal government just provides information, but there is a regulatory burden to doing so, and colleges might not want to provide that,” he said.

He’s also curious about her views on income-based loan-repayment programs and whether there should be limits on how much students should be able to borrow for higher education.

“Higher education has never been more important, nor more expensive. The federal government spends hundreds of billions of dollars a year to help students go to college. And while college is definitely ‘worth it’ on average, there are too many poor-quality programs that leave students either in debt with no degree or with a credential that leaves graduates stuck in minimum or low-wage jobs. What will you do as secretary to ensure that taxpayer dollars are spent at institutions that provide students a quality education? And what will you do to ensure transparency about college outcomes so that students and families can make informed choices about where to spend their valuable time and money?”

“Many have interpreted the recent election results as an indication that many Americans see few to no opportunities to support themselves and their families. What role could workforce development programs, along with career and technical education, play in expanding job opportunities for Americans? What role should the department play in providing accessible, high-quality options for career and technical education through community colleges, both for recent high school graduates and for adults?”

Mann would also like DeVos to answer questions about how she plans to engage a “healthy mixture of voices” when making decisions and how she’ll ensure states have flexibility while still holding them accountable under the ESSA.

McManus is interested in bigger-picture, philosophical issues, such as “What is the role of the secretary in addressing resource inequities and inequities in opportunities to learn?” and “What does an equitable school system look like?”

On ESSA, she’d like to know DeVos’s views on accountability and the federal role in ensuring it, as well as her commitment to continued use of disaggregated student data — breaking out results for poor students, students of color and those with disabilities, etc. — under ESSA for school accountability.

“A high-quality early-childhood education can take place in a classroom, a church basement or even a neighbor’s home. What can be done to partner with states and communities so they have the tools and resources they need to ensure early learning and care programs are high-quality?”

Perry would also like DeVos to comment on how she would support governors and state legislatures making strides in early-childhood education.

Petrilli would like to know how DeVos will evaluate state accountability plans that must be submitted next year under ESSA.

“Can she give examples of proposals states might make that she can imagine refusing to approve? Get her on the record saying what, if anything, would she not be willing to allow states to do as she implements the law,” he said.

Petrilli is also interested in her views on the Institute of Education Sciences, the research arm of the Education Department — specifically, whether she believes it’s important that the agency be independent and well funded. Petrilli wonders what DeVos would do if, hypothetically, officials tried to produce a report showing negative results for one of her policy priorities.

“One question they should raise of her that they’ve raised of others: What are your plans to improve traditional public schools?”

Robinson would also like to know how she will advance school choice in rural areas — places that voted heavily for Trump but don’t have the bevy of private and charter school options and other educational choices that exist in larger cities and suburbs.

In addition, Robinson would like to know how she plans to make higher education more affordable and how she would help historically black colleges and universities. The schools were particularly hurt when the Obama administration in 2011 changed criteria for a parent loan program, leaving more than 14,000 students ineligible for the additional aid despite having been approved previously.

“Decades of rigorous evidence make clear that the majority of factors driving achievement gaps are based outside of schools and are associated with family and community poverty and segregation. The 1966 Coleman Report suggested that roughly two thirds of race-based gaps were attributable to these factors, and no serious research since has indicated otherwise. Given that reality, what should top priorities be for education policy and changes to it? In particular, how should we broaden education policy to address the larger set of factors impeding academic success for many of our children, especially in a time of such high poverty rates among them?”

(The 74: 50 Years Later, What America Still Hasn’t Learned From the Coleman Report)

Weiss would also like DeVos to discuss whether and how she’ll follow Obama administration efforts to end racially disproportionate discipline practices and expand early-childhood education. She’s also interested in DeVos’s views on how to remedy teacher shortages and how states can use ESSA to improve equity in schools.

What would you like to ask Betsy DeVos about education during her confirmation hearing? Send your questions to info@the74million.org.