At Philadelphia’s Mastery Charter Network, Culture Is Key to Turning Around Failing Schools 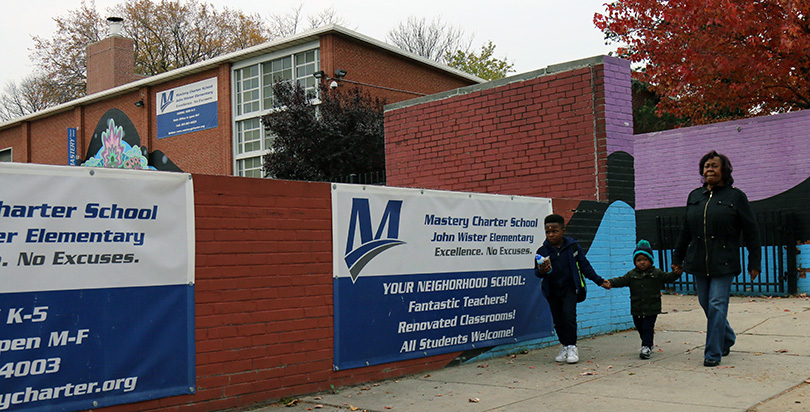 Philadelphia
At John Wister Elementary School in Philadelphia’s Germantown neighborhood, children come to class wearing matching polo shirts. In the hallways, students walk in straight, silent, and orderly lines. In the classrooms, signs instruct children to sit “like a S.T.A.R.” — meaning “Sit up tall,” “Track the speaker,” “Ask and answer questions,” and “Respect those around you.”
In one classroom, a teacher’s math lesson comes across as a rapid-fire combination of instruction, refocusing, and admonishment for improper behavior: “So, we can separate the numbers, we can add the 10s and the 1s, what else did we learn about? We’re not playing with shoelaces; put your hands in your lap, please, thanks so much. What is another way we learn?”
Until last year, Wister’s students had never experienced this degree of structure in their school. But when the children returned to the old brick building in August, the floors had been cleaned of years of dirt and filth. A fresh blue hue had replaced the monotonous beige walls. A putrid odor had been scrubbed from the bathrooms. The students were the same, and the building carried the same name. But every teacher and administrator was new.
Wister had been taken over by Mastery Charter Schools, the city’s largest charter network, which made its name turning around some of the city’s most hardscrabble schools.
“Many of our students start really far behind, and so the school needs to be just outstanding in providing many different types of supports to students and have an overall patina of high expectations,” said Scott Gordon, Mastery’s founder and CEO. “We, as an organization, have to firmly establish we believe every child in this school can succeed. We believe this can be a safe, productive school community.”
Unusual among charter networks, Mastery specializes in district school restarts, considered the most difficult model for improving persistently low-performing schools. Normally, charter schools start small and scale up over time, adding one grade per year and inculcating a culture of academic achievement in their students from a very young age. 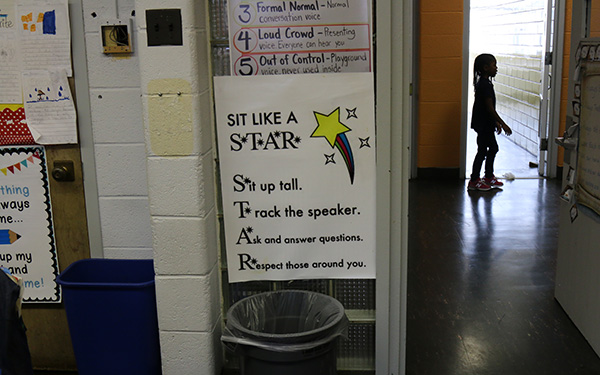 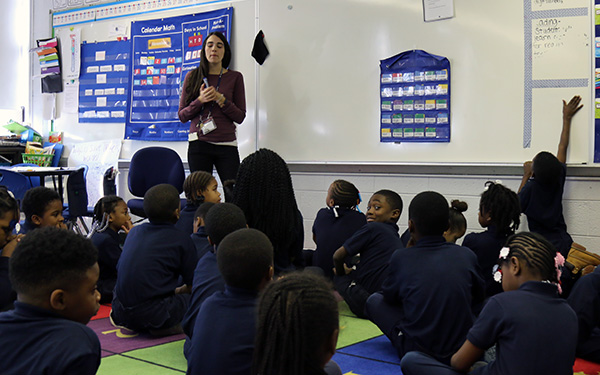 Samantha Radinsky, a teacher at John Wister Elementary School, gives her second-grade class a math lesson. The school was taken over this school year by Mastery Charter Schools.
Finding a balance
For Gordon, the drop in math scores was a reality check. He was proud of the progress Mastery had made on addressing student climate, but the decline in academic performance, even given brand-new exams, was extremely distressing. And although Mastery’s math scores have rebounded somewhat, the challenge for Gordon now is to preserve the environment that allowed suspensions to drop 27 percent while reinstating practices that bolster student learning.
So this year, the network began reintroducing teaching techniques that had been a staple at Mastery schools for years, while seeking a middle ground between no excuses and restorative practices. It’s a “journey of trying to find out what’s the right mix,” Gordon said.
Specifically, the network is reintroducing procedural math instruction, which focuses on rote instruction like memorization and repetition.
But as Mastery works to rebuild the test score gains it saw in years past, another external factor could hinder its future. In October, Hite announced that the district would not convert additional district schools to charters under the Renaissance program in the 2017–18 school year, pending results of an evaluation. That evaluation, he said, will focus on a range of factors, including district finances and the performance of Renaissance schools.
Though Mastery runs nearly half the Renaissance schools in the city, Gordon said he isn’t worried about the evaluation. He’s confident that the program will return, in some form or other, as “tens of thousands of students are suffering in low-performing schools” across Philadelphia. And when it does, addressing school climate will be an essential part of the conversation.
As Shorr put it, “Sometimes you can have a school where they’ve got the culture part down but they haven’t gotten to the academic performance piece yet, but I have never seen a school where the academic performance piece is in place and the school culture is bad.”
Submit a Letter to the Editor
February 20, 2017