As NAACP Votes for Charter Moratorium, School Families Rally Outside 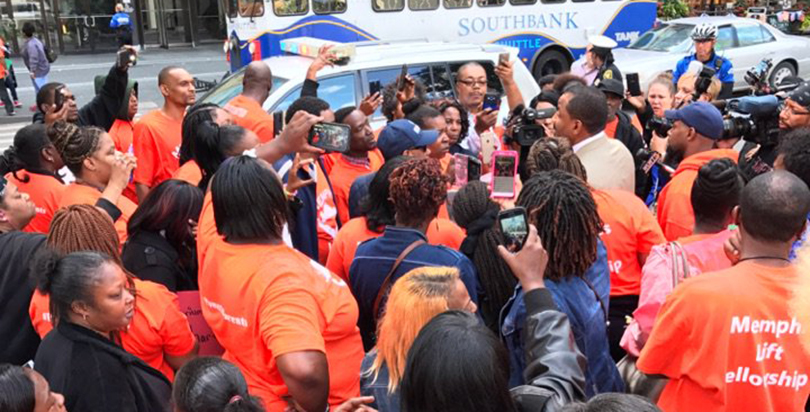 The National Association for the Advancement of Colored People reiterated its opposition to charter schools Saturday when its board of directors ratified a resolution calling for a moratorium on charter school expansion until more oversight is established.
The board’s vote followed months of intense pressure to reject the proposal from other black education advocates, who argued that charter schools give children in poor neighborhoods better school options. Demonstrators from a group called Memphis Lift protested and at one point disrupted the board meeting.
The NAACP’s wariness is rooted in its decades-long support for making traditional public schools more equitable for black children, said board chairperson Roslyn Brock.
“The NAACP has been in the forefront of the struggle for and a staunch advocate of free, high-quality, fully and equitably funded public education for all children,” she said in a statement. “We are dedicated to eliminating the severe racial inequities that continue to plague the education system.”
The resolution was first proposed by the NAACP branch in California and Hawaii and was unanimously supported by 2,200 delegates at the organization’s 2016 annual convention in July, according to Hilary Shelton, the NAACP’s senior vice president for advocacy and policy.
The 64-member board ratified the resolution by a voice vote during a meeting in Cincinnati, said Shelton.
“It was clearly unanimous,” he said. “It was unquestionable.”
He added that the board also agreed to start a task force that will take comments from charter school families and experts to develop more specific goals for the moratorium.
The NAACP has already outlined conditions for the moratorium, including holding charter schools to the same transparency and accountability standards that govern district schools.
It also called into question the way charters are funded, saying a moratorium should continue until “public funds are not diverted to charter schools at the expense of the public school system.”
Charters were also faulted for expelling students whom “public schools have a duty to educate” and separating “high-performing children from those whose aspirations may be high but whose talents are not yet as obvious” as their peers’.
“The NAACP stood by its position,” said board member Amos Brown, who supported the resolution. “We made it very clear that our position was an affirmation for public education, which is where the least of these [are educated]. We must make public education work for all. So that is where we still stand on that.”
At least one board member disagreed. Phil Murphy, a former U.S. ambassador to Germany and current Democratic candidate for governor in New Jersey, said the resolution went too far.
"I remain committed to bringing both sides of this issue together in New Jersey to figure out what works, what hasn’t, and how district schools and charter schools can best coexist in our communities,” he said in a statement. “Communities may disagree as a matter of opinion, but leadership requires a careful examination of all facts and a shared goal of arriving at a consensus, when possible. I could not support today’s resolution without having such clarity.”
Education advocates pressured the board to reject the resolution until just before the vote this weekend.
The Black Alliance for Education Options and the National Alliance for Public Charter Schools co-hosted a “meet and greet” breakfast with board members to discuss the potential impact of the resolution on black children. Only one board member attended, according to the Alliance.
Advocates also presented a petition with more than 3,000 signatures opposing the moratorium. Last month, the two groups launched a “Charters Work” campaign, in which more than 160 black education and faith leaders sent a letter to the NAACP urging the group to rethink the resolution.

Proud of these students rallying to say #ChartersWork in memphis. Calling for a moratorium is misguided, these students say @ForSchoolEquity pic.twitter.com/OZCBkuhbtu

In a separate demonstration, more than 100 pro-charter African-American parents and grandparents from Memphis piled into buses on Friday in advance of the vote. The protesters, part of the Memphis Lift advocacy group, gathered in the square across from the hotel, chanting “I won’t stop. I can’t stop,” according to the Cincinnati Enquirer.

“We have charter schools that are good,” Sarah Carpenter, a grandmother of 13, told the newspaper during the protest. “We are not against public schools. We want good schools of any type. Where was the NAACP when so many public schools were failing our children?”
In a video that surfaced on social media over the weekend, a man who appeared to be a representative from the NAACP can be seen arguing with and fielding questions from a group of protesters.  The man says that “in some cities [charter schools] are not getting what they are supposed to get,” referring to their performance.
“But that’s in public schools too,” one woman yells in response.

Later some of those demonstrators marched into the hotel and disrupted the board meeting with chanting until police were called. There were no arrests, and it was likely the hotel who called the police, according Shelton.

“They shared what they wanted to share,” said Shelton, who talked with some of the protesters on Saturday. “Hopefully it’s just a down payment on what we will hear from these parents and many other charter school parents.”
The vote quickly attracted response from education groups across the country.
“On behalf of the membership of the United Federation of Teachers, we support the NAACP resolution calling for a moratorium on the expansion of charter schools,” Michael Mulgrew, president of the United Federation of Teachers, said in a statement.  “Charter schools claim to be public institutions, but in too many communities, charters take public funds yet are not accountable to parents, lawmakers or taxpayers.”
But Democrats for Education Reform president Shavar Jeffries argued that the NAACP was acting counter to its mission.
“W.E.B. DuBois is rolling in his grave,” he said in a statement. “The NAACP, a proud organization with a historic legacy of expanding opportunity for communities of color, now itself stands in the schoolhouse door, seeking to deny life-changing educational opportunities to millions of children whose parents and families desperately seek alternatives to schools that have failed them for too long.”
The debate among minorities over charter schools dates to their inception in the 1990s. Even the NAACP was divided in 1997 about whether supporting charter schools undermined its long-held demand for a better and fairer public education for all children.
The next year, the civil rights group passed a resolution against charter schools, arguing that they are not subject to the same accountability standards that public schools are.
More resolutions against charter schools followed. In 2010, the NAACP argued that too much emphasis was placed on charter schools. In 2014, the group passed another, saying it opposed the “privatization of public schools.”
Given the NAACP’s long history of advocating for equal resources for all traditionally public schools, it was no surprise the board voted in favor of a moratorium, said Brown.
“All these schools should be working,” he said. “There should not be inequality in school districts.”
Submit a Letter to the Editor
October 17, 2016