As Immigration Battles Heat Up Across the U.S., California District Faces Its Own Refugee Crisis 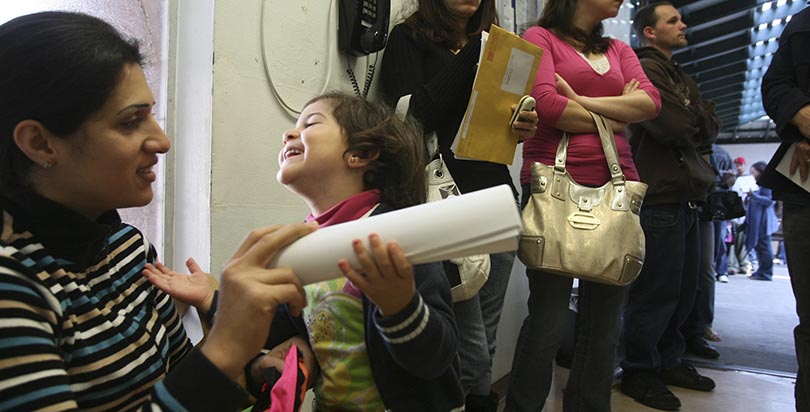 Early in the school year, Abdul’s teacher observed some peculiar behavior. Just months before, the kindergartner and his family had been holed up at a refugee camp in Jordan, on the run from the brutal Syrian civil war. His family had just relocated to El Cajon in Southern California, and Abdul kept trying to bathe in the classroom sink.
Abdul, whose name was changed to protect his family’s identity, had spent 24 hours a day with his mother in the refugee camp, and his teacher could tell that the separation during the school day was taking a toll on the 5-year-old boy. But strange behavior is common among El Cajon’s refugee students like Abdul, who struggled for the first few months to understand Western cultural norms. Typically coming to the U.S. with interrupted educations and lingering traumatic memories of violence, skittish children might jump under their desks when the school bell rings or cry uncontrollably when their parents drop them off for the day.
El Cajon has been a resettlement hub for more than a decade for refugees from Iraq, Afghanistan, and a handful of other countries. Located just east of San Diego, the city has a mild climate, safe neighborhoods, affordable housing, and a vibrant immigrant community that make it a destination for people in search of a better life.
“We get to be the ones to introduce America to a lot of new Americans, and that’s quite a privilege,” said Eyal Bergman, family and community engagement officer for the Cajon Valley Union School District.
But now, Cajon Valley is at the breaking point, faced with an influx of hundreds of kids needing millions of dollars worth of trauma, language, and remedial education services that the 26-school, 17,500-student district cannot afford.
Riding a wave of immigration
Since August — a year after the Obama administration announced it would admit more Syrian refugees — nearly 800 new students have enrolled in the El Cajon schools, the majority of them survivors of war-torn Syria, Iraq, and Afghanistan. That’s more than double the number of new students the previous school year. Nationwide, of more than 11,000 Syrian refugees who resettled in the U.S. in the last year, about 60 percent were children.
So last month, Superintendent David Miyashiro, Bergman, and school district board member Tamara Otero flew to Dulles International Airport in Washington, D.C., to lobby for additional funds. Little did they know when they planned their trip four months ago that it would coincide with an outburst of demonstrations over a Trump administration order that barred citizens of seven majority-Muslim countries — and all refugees — from entering the U.S.
In fact, had their plane touched down a few hours later, they would have been caught up by protesters who swept into Dulles and other airports across the country to protest Trump’s order targeting immigrants exactly like El Cajon’s refugee students and their families.
(The 74: Photos: Parents Took Their Kids to the Immigration Protests — and Created a Teachable Moment)

Miyashiro knows what it feels like to be feared by the federal government — he is of Korean and Japanese ancestry, and relatives of his were ripped from their homes and placed in internment camps during World War II. Families in his community, he said, worry that President Trump’s aggressive stance on immigration could separate them from their loved ones indefinitely. 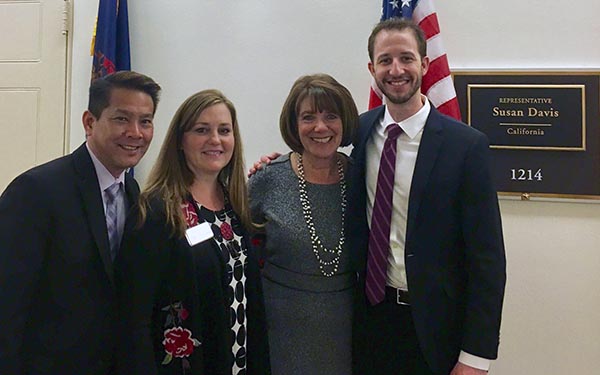 David Miyashiro, Tamara Otero, and Eyal Bergman of the Cajon Valley Union School District meet with California Rep. Susan Davis at her office in Washington, D.C.
Photo: David Miyashiro
Though federal courts have blocked Trump’s executive order, the influx of immigrants to El Cajon won’t stop anytime soon, Miyashiro said. That’s because many of El Cajon’s refugees come in waves as part of a secondary migration. Families who were placed by the federal government in cities and towns around the country often move southwest to El Cajon, he said, because the city offers resources they’re familiar with: Middle Eastern grocery stores and restaurants, mosques, and Chaldean Catholic churches that support a growing Iraqi Christian population. El Cajon is home to America’s second-largest population of Chaldean refugees.
But when students arrive, he said, they don’t bring additional resources for the public schools because the district receives funding based on average daily attendance from the previous school year. With an annual district budget of about $170 million, Miyashiro estimated Cajon Valley needs an additional $5.6 million to serve its 700-plus new students.
“It’s a lot of money, but you think to run a school, a whole school, with a staff of 200 people with wraparound services and transportation and child nutrition, it’s very expensive,” he said. “We were given these new students without any funding, and that’s only baseline funding. That’s not counting the counseling and mental health support and English language development.”
For that shortfall, Miyashiro blames the Obama administration. “I don’t think his administration considered the impact to the local communities and local schools, because they didn’t send additional aid with it,” he said. “If we want to have these folks not be a permanent drain on our local and national economy, we need to invest in their education, their ability to speak English, and their ability to be gainfully employed, and our schools are designed to do that.”
To compensate for the deficit, the district is seeking funding from several sources, including Every Student Succeeds Act Impact Aid money, which is given to local districts affected financially by federal policies. That meant a trip to Washington, arranged through the National School Boards Association’s Annual Advocacy Institute. And that’s how Miyashiro and his colleagues met with California Sen. Kamala Harris, House Minority Leader Nancy Pelosi, and other lawmakers at the moment when refugees became the dominant topic of national conversation.

“Our ask is about kids that are currently in our classrooms that will or will not grow up proficient in English, that will or will not grow up with the skills necessary to be employed and contribute to the local and national economy,” Miyashiro said. “The government has already placed them here. If they want to have these students go into college and career and be gainfully employed and pay taxes, they’re going to need to give the school system money.” 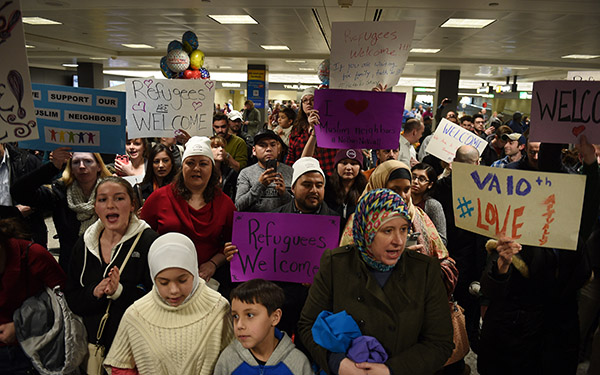 People protest President Trump's executive order, which barred refugees and citizens of seven majority-Muslim countries from entering the U.S., at Dulles International Airport on January 28.
Photo: Getty Images
Building blocks
In the few months Abdul has been enrolled at Cajon Valley, he has shown tremendous potential, Bergman said. Though he can’t yet carry on a conversation in English, the boy is learning quickly. He’s also starting to make friends, Bergman said, and he likes to give his teacher high-fives.
As a bridge between families and schools, Bergman’s office offers a newcomer outreach program to introduce parents and students to American public education. Through one-on-one meetings in families’ native languages, school officials learn about the children’s academic histories. Most of the students have little exposure to English beyond what they’ve heard on television. Few speak conversational English.
For some kids, the district offers intensive “newcomer” English instruction before they’re placed in general classrooms. The district also offers a program — in English, Spanish, and Arabic — designed to teach elementary school parents how to read with their children.
Refugee families typically move into the same apartment complexes, so they’re often grouped into specific schools. But those schools are now at capacity because of the enrollment surge, Bergman said, and the district has to offer overflow destinations. As a result, schools are stretched thin on counselors and teachers trained to address significant trauma.
“We’re having to adjust a lot of placements and operations and routing,” Bergman said, “and helping schools that aren’t used to receiving refugees understand what’s the good content material, what’s the good assessments, how to do English language instruction in the classroom.”
Miyashiro isn’t certain whether the district will be able to secure all the money it’s asking for to continue providing these vital services, though he said he left Washington encouraged. But whatever the outcome of his funding push, and however the Trump administration’s immigration policies play out, helping refugee families become Americans will remain a large part of El Cajon’s future.
“From a national security lens, we want to be safe from terrorism,” said Miyashiro. “But from a human rights perspective, my colleagues and I, the teachers who serve these kids, the churches that are providing aid, we love these people, these are our people, it’s our community, and it’s a beautifully diverse community.”
Submit a Letter to the Editor
February 14, 2017