NewsRural Education During the Pandemic 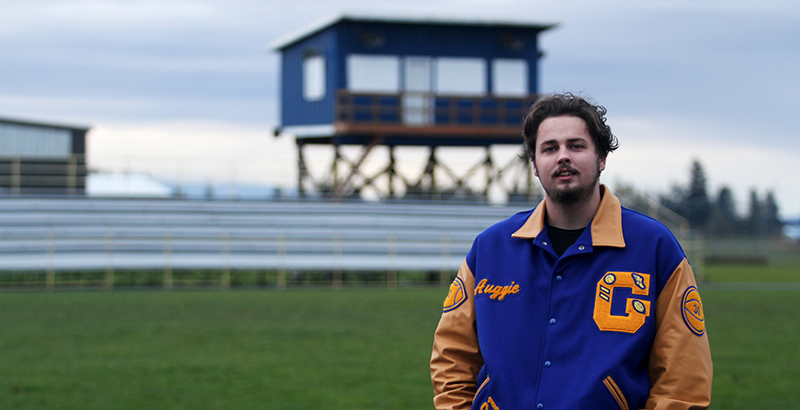 Auggie Guido, a senior at Gervais High School in Gervais, Oregon, says it’s hard to stay engaged with online classes given the demands of helping younger siblings and the lack of a sports season to motivate him. “I’m just not as focused and committed,” he says. Officials in the rural district have started evening tutoring sessions to help students like Guido juggle competing demands for their time. (Phil Hawkins / Pamplin Media Group)

This piece, originally published by Underscore/Pamplin Media Group, is part of a collaborative pandemic reporting project led by the Institute for Nonprofit News and member newsrooms. (See more rural case studies at The 74)

Augustine Guido looks forward to the chance of again playing under the Friday night lights on the Gervais High School football field, even in a shortened spring season. After graduating, the 17-year-old senior hopes to do it on Saturdays wearing the uniform of his favorite college team.

He’s kept his grades up to be eligible to stay on the field, but the pandemic has changed the way he views school.

“I’m just not as focused and committed,” said Guido, known to his classmates as Auggie. “It’s been a bummer.”

Without football, Guido said he has found it harder to stay engaged with online classes, and his grades are slipping.

“It was sports that kept me motivated” said Guido, who also was a starter for the Cougars’ basketball team last year. “It’s all shut down now.”

Reporting by Pamplin Media Group and Underscore shows that the COVID-19 pandemic is widening achievement gaps for Oregon students of color, including those who attend rural schools.

In the previous academic year, Gervais High School, which has a majority Latino student body, boasted a 92% graduation rate.

The latest schoolwide grades — a two-week snapshot of December — indicate 40% of students are failing. At the same time, the number of completed college aid applications at Gervais High School is down 43% from this time last year, indicating there is less interest among this year’s senior class in continuing their education after high school.

Students feel the need to work

The drop-off comes as students like Guido navigate a host of challenges that come with the unusual circumstances of a pandemic.

“I think most high schools in our state are having trouble with students engaging and distance learning,” said Andrew Amen, vice principal at Gervais High School. “We noticed we had an outstanding number of absences, which led to an astounding number of failing classes.”

The decline in attendance and grades forced Amen to reimagine his role as vice principal, stepping out from behind the desk and knocking on doors.

“Any students who have three or more F’s, we now go out and knock on their doors two days a week,” Amen said, “and what we have found is that the majority of our juniors and seniors are working full time.”

National youth participation in the labor market is at the highest point in 10 years, 36.2% compared to 35.2% this time last year, even as adult participation levels in the economy haven’t returned to prepandemic levels.

“They’re having a very difficult time going to work eight or 10 hours and then coming home at night tired, and they’re not engaging in the classes,” Amen said.

Some parents don’t have the option of working from home, as agriculture or service jobs are unable to be performed over Zoom.

“A lot of people were losing jobs,” said Sylvia Valentine-Garcia, the district’s director of special programs. “I think some of the kids who have jobs, their families maybe need them to keep that job.”

Valentine-Garcia recalls talking to a couple students in her office about their work obligations.

“They couldn’t quit,” she said.“They just couldn’t afford to.”

So, she reminded them that all the classes are recorded.

“I’m saying, ‘When you get home from work you have to eat dinner, right? So, while you’re eating dinner, can you listen to your recorded classes?’”

Child care also is a factor

While some students are working outside the home, others are fulfilling a role usually done by schools.

“Another thing we’re running into is students having to spend time with their young siblings, helping their younger brother or sister with their elementary classes, which gets in the way of pursuing their own education,” Amen said.

Guido can relate to that.

“I have two younger brothers,” said Guido, who watches over his siblings while his parents are at work. “We have music on in the background and mute our microphones, but I make sure they’re doing their work. I have to tell them ‘quiet down, we’re all in class.’ I have to motivate them, stay positive.”

Valentine-Garcia started a program offering tutoring every night from 6 to 8 p.m., shifting funding to help students who are working or looking after siblings during the daytime.

“If we have a student not doing well because they’re taking care of their siblings during the day, while their parents are at work, then we have to help those students in the evening,” Valentine-Garcia said.

She knows extending the school day is not ideal, but it is an effort to accommodate the needs of students.

“When you’re dead tired and going to eat dinner and get ready for the next day, how can we get some schooling in?” she said.

Amen said that the challenges he’s seeing are impacting all kinds of students.

“It’s not just kids who weren’t motivated before,” he said. “It’s also kids who were doing well. We have students who were very successful, straight A’s, and are now not engaging.”

Student athletes like Guido may find some motivation in tentative plans to host a shortened athletic season in Oregon starting next month and, in some districts, resume in-class learning.

“It’s weird getting up in the morning and doing this from home,” Guido said. “I’d rather be in school. Hopefully there’s a chance we can get back.”

This piece, originally published by Underscore/Pamplin Media Group, is part of a collaborative reporting project called “Lesson Plans: Rural schools grapple with COVID-19”. It includes the Institute for Nonprofit News, Charlottesville Tomorrow, El Paso Matters, Iowa Watch, The Nevada Independent, New Mexico in Depth, Underscore News/Pamplin Media Group and Wisconsin Watch/The Badger Project. The collaboration was made possible by a grant from the Walton Family Foundation, which also funds The 74.

Sergio Olmos is a contributor to Underscore/Pamplin Media Group