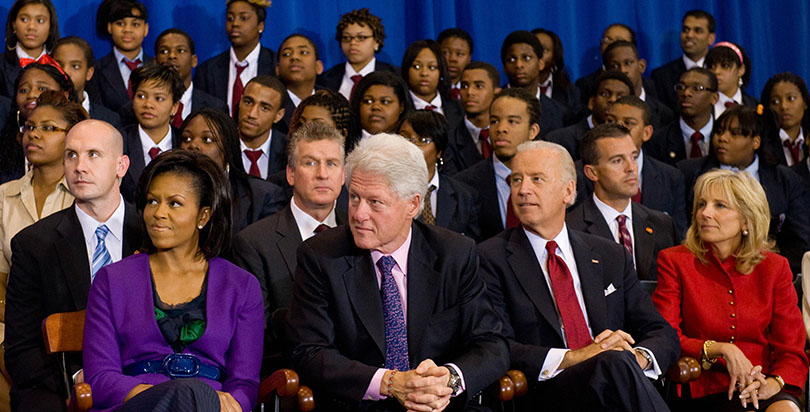 Much will be made post-election of the legacy of President Barack Obama. In the education world, that includes a strong federal hand in shaping state and district policy through No Child Left Behind waivers and Race to the Top grants, a huge push for new public preschool programs and an effort to crack down on colleges that mislead students or otherwise violate federal law.

But for education advocates, particularly those focused on college enrollment among traditionally underserved students, First Lady Michelle Obama looms even larger than the president. The end of her tenure, and the prospect of Bill Clinton as first spouse, opens the door for a new White House advocate for children’s issues such as education.

The first lady’s Reach Higher campaign — and the example she and the president set as the first black family in the White House — made an impact on millions of young people of color on their path to high school graduation and college enrollment.

Reach Higher “really did get kids to really want to go, especially the ones that are not sure,” said Jennifer Covahey, associate program director for scholarships at CollegeBound, a foundation that helps students in Baltimore find colleges, apply to them and pay for them.

Alcedo Hodge, now a sophomore at the Community College of Baltimore County in Essex, Md., said he had been pretty confident about wanting to attend college, but a 2015 Reach Higher event he attended through CollegeBound was the “icing on the cake” that sealed his decision.

“To know my hard work in high school paid off to make it to an event like this really meant a lot,” he said.

Rapper Wale and actor and TV show host Terrence Jenkins attended the event and explained how college helped them in their careers, Hodge said. But the president and first lady were the real draw.

“I don’t know of another time in my life that was really equal to being in front of Michelle and eventually seeing [President] Obama,” Hodge said. “Having the first black family in the White House was a big thing for the black community.”

Levar Harris, currently a sophomore at Hampton University in Virginia, also attended the 2015 event, and he said the Obamas set an example for black students.

“They raised the standard, showing we aren’t just set for one specific picture. Before the Obamas came in, everybody had this one picture for how far African Americans, especially men, could make it,” he said. Now there are options “beyond that picture for what everybody had for us.”

During her time in the White House, the first lady launched Let Girls Learn, aimed at expanding access to secondary education for young women around the world. And she’s perhaps best known for the Let’s Move initiative, which changed the federal school lunch program and put a new national focus on healthy eating and exercise.

“I do think she has changed a lot of thinking about how important healthy exercise and eating are in childhood. Of all her projects, I think that’s the one that has had the greatest impact,” said Katherine Jellison, a history professor at Ohio University and an expert on first ladies.

Obama was ranked No. 5 among American first ladies in a 2014 Siena College poll of historians, political scientists and other scholars, behind Eleanor Roosevelt, Abigail Adams, Jacqueline Kennedy and Dolley Madison.

She has followed in the footsteps of other activist first ladies, but with added star power — both her own and that of other well-known personalities who have helped promote her message, said Katherine Sibley, director of the American Studies program at St. Joseph’s University in Philadelphia.

“She has made herself more visible and so active in so many ways,” Sibley said.

So what would be the role for the first first gentleman?

When the Obamas leave office, the country will not only lose a charismatic first lady — it may well have to grapple with what it means to have a man in the role of first spouse.

“It’s always been assumed, since our first spouse will be a woman, she will care about children’s issues and she will care about issues that affect the American family. Even though the year is 2016, I think most Americans probably still have that kind of attitude,” Jellison said.

Whatever role Bill Clinton undertakes should Hillary Clinton become president, he’ll have to be careful to avoid the perception that he’s stepping on his wife’s toes, Jellison and Sibley agreed.

Sibley said that given Hillary Clinton’s history of working on children’s and education issues, she could elevate the subject to some more formal office — or just do it herself.

Or, another Clinton — Chelsea — could fill the role as prime advocate for women and families.

“I could see her probably being very comfortable being a leader in a program or campaign that deals with those kinds of issues,” said Jellison.

Sibley suggested that since Chelsea Clinton grew up in the White House, she might share those duties with her father — and perform them quite well.

Julie Nixon, the most outgoing member of an introverted family, would often greet visitors, particularly children, who visited the White House, and Anna Roosevelt, daughter of Franklin and Eleanor, fulfilled some traditional hostess-type duties for her mother, who was often traveling and busy with her own causes, Jellison said.

Other female relatives, like nieces and sisters, have performed first lady duties for other presidents, Sibley said.

Whichever Clinton might take on the traditional first spouse duties, he or she would have big shoes to fill — especially as Michelle Obama has said she’ll continue the work she started in the White House, particularly regarding girls’ education. First ladies, Jellison noted, are rated in large part by what they do after they leave office.

“I think she’ll still be up there at the top,” Jellison said.