A Reckoning for DACA: With Possible Deportation of Dreamers in the Balance Tuesday at the Supreme Court, Education Groups Urge Justices to Protect Students and Teachers 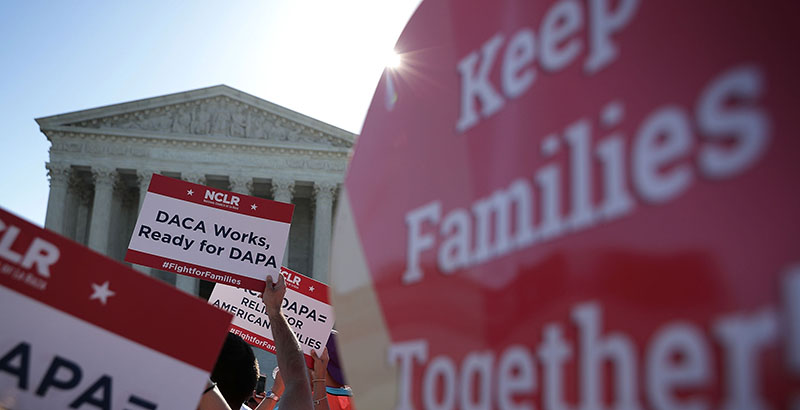 Immigrants who have lived in the U.S. illegally since childhood have been at the center of a political tug-of-war for years. But now, the Supreme Court could decide their fate.

On Tuesday, the Supreme Court will hear oral arguments in a high-profile case on whether the Trump administration can end the Deferred Action for Childhood Arrivals (DACA) program, which provides work permits and deportation relief to some 700,000 undocumented immigrants brought to the U.S. as young children. The fate of DACA recipients, often called Dreamers, has been in limbo since September 2017, when the Trump administration announced a plan to phase out the program. Two years later, much of the program remains in place after federal courts blocked the administration’s move to terminate it.

The Supreme Court’s decision holds significant ramifications: With a ruling expected by the summer of 2020 — just as the presidential campaign kicks into high gear — the court, and its 5-4 conservative majority, could put thousands at risk of deportation.

Ahead of Tuesday’s oral arguments, briefs filed with the Supreme Court reflect the high emotions invested in the outcome. DACA critics argue that the Trump administration has the right to end the program; it was never legal to begin with, they say, because it was not approved by Congress. Meanwhile, proponents say Trump’s push to end the program is arbitrary and would endanger recipients. Education organizations — from the National School Boards Association to the National Education Association — overwhelmingly sided with the Dreamers.

“As the administrative state has grown more complex and increasingly pervasive, Congress” and the Supreme Court have given vast power to the executive branch “with one fundamental check: That an agency must adequately explain its actions,” according to a brief filed by the school boards association and other education nonprofits. “The government’s position in this case is a frontal attack on that basic right.”

The brief notes that students make up about half of those eligible for DACA: An estimated 365,000 in high school and 241,000 in college. But the effects of ending the program extend further, the groups argue. “These people are parents, neighbors, teachers, custodians, administrators and students in public schools.”

After years of stalled immigration reform efforts in Congress, then-President Barack Obama created DACA through an executive order in 2012. The Trump administration announced in 2017 a plan to phase out the program, arguing that it was created though unlawful executive authority or, as then-Attorney General Jeff Sessions called it at the time, an “open-ended circumvention of immigration laws.” In failed negotiations with Congress, President Donald Trump used the program as a bargaining chip to push through his own immigration agenda, including funding for a wall along the U.S.-Mexico border.

To justify the move, the administration pointed to recent legal action on a similar Obama-era program, Deferred Action for Parents of Americans and Lawful Permanent Residents (DAPA), which the Fifth Circuit blocked before it went into effect. That program sought to provide relief to undocumented immigrants with children who are U.S. citizens or are lawful permanent residents. That decision survived after the case made a stop at the Supreme Court in 2016. The death of Justice Antonin Scalia left the court deadlocked at 4-4, keeping the lower court opinion intact.

The Trump administration’s decision to terminate the program was halted by multiple federal courts, including the Ninth Circuit, which upheld a nationwide injunction. That ruling stemmed from several lawsuits, including one filed by the University of California system and its president, Janet Napolitano, who previously served as Obama’s Homeland Security secretary. The Supreme Court case combines three similar lawsuits that challenged the government’s decision to end the program filed by the Regents of the University of California, the NAACP and Martín Batalla Vidal, a DACA recipient from New York.

Currently, recipients are able to renew their protections, but eligible immigrants can’t apply for the first time. Meanwhile, about 100,000 undocumented teens graduate from high school each year, according to a recent report by the nonpartisan Migration Policy Institute.

Among groups arguing against the lower court decisions and in support of the Trump administration is the Immigration Reform Law Institute, which seeks to “control illegal immigration and reduce lawful immigration to sustainable levels.” In its brief to the Supreme Court, the group argues that the Obama administration did not go through the appropriate channels to create DACA, calling it a “programmatic refusal” by the Department of Homeland Security “to enforce Congress’s clear statutory mandate.”

“Not only has Congress rejected a legislative version of DACA repeatedly, it has found that ‘immigration law enforcement is as high a priority as other aspects of federal law enforcement, and illegal aliens do not have the right to remain in the United States undetected and unapprehended,’” according to the institute.

Education groups, however, argue that the administration’s decision to terminate the program violates the Administrative Procedures Act because the move was “arbitrary and capricious” and failed to consider a swath of negative ramifications.

Eliminating DACA also carries negative implications for the health care sector, according to a brief filed by the Association of American Medical Colleges and 32 other organizations that include schools and residency programs that have educated and trained undocumented health care providers.

“The decision to expend vast amounts of time, money and effort in educating and training DACA recipients in the health care sector was … made in reliance on the expectation that such individuals would be able to serve the public once educated and trained,” according to the brief. “Rescinding the program negates all of that substantial time, money and effort spent.”

A similar brief argued that the administration’s decision to end the program “has endangered the mental and physical health of hundreds of thousands of children — mostly U.S. citizens — whose parents are DACA recipients.” Many of those children worry that their parents will be deported, “and that fear negatively impacts all aspects of their lives, including their health, education and overall family stability,” according to the brief, filed by the American Professional Society on the Abuse of Children, the American Academy of Pediatrics and other child advocacy groups.

Beyond the risk of deportation, the Trump administration’s decision could put children at risk of losing housing, access to sufficient food, income and educational opportunities, the groups argued.

Educator groups, including Teach for America and the National Education Association, noted that thousands of teachers rely on the program — and even more students benefit from their guidance. In its brief, TFA pointed to a lawsuit by corps member Miriam Gonzalez Avila, who was born in Mexico but has lived in the U.S. since she was 6. She previously told The 74 that she filed the lawsuit because she wanted to show students in her Los Angeles classroom that she couldn’t be easily defeated. That lawsuit was included in the Ninth Circuit’s nationwide injunction.

“She believes, as Teach For America believes, that to rescind DACA so abruptly, when so many have relied on it to better themselves and their country, is unlawful and wrong,” according to the brief.