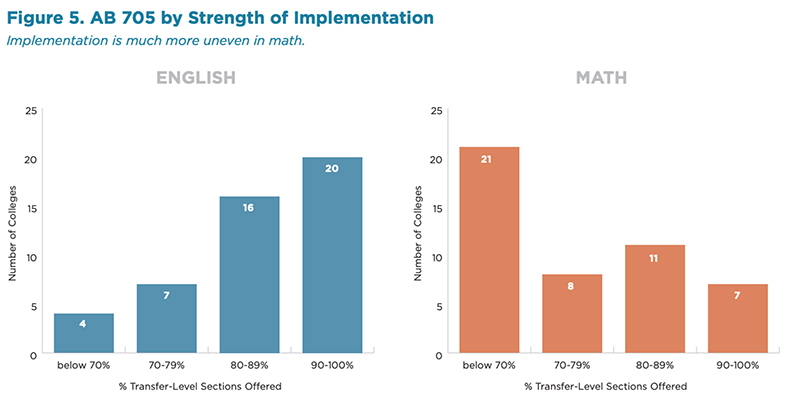 California’s 115 community colleges are in the midst of a major transformation of how students are taught college-level math and English courses.

A state law instituted a fall 2019 deadline for community colleges to largely end the practice of forcing students into remedial classes, which repeat coursework that students have already learned in high school. Remedial education has also shown to sink the ambitions of many confronted by material that doesn’t count for credit but still costs money.

For today’s high school seniors, the changes signal hope that their time in community college will be a smoother experience than that of their predecessors.

The decision to largely abandon placing students in remedial courses is backed by recent California research of more than 1 million student records. It showed that students are up to three times as likely to pass a transfer-level math or English course within a year when placed directly into one as they are when placed in a remedial course that’s even a single level below a college-level course, which is necessary for transfer into a four-year university. California Community College guidelines adopted the findings of this placement research for its rules about the level of courses colleges assign students.

Backers of the effort to place more students in transferable courses say students rise to the challenge, pointing to evidence that as more students are allowed to skip remedial courses and take transferable ones, a greater number end up passing them. 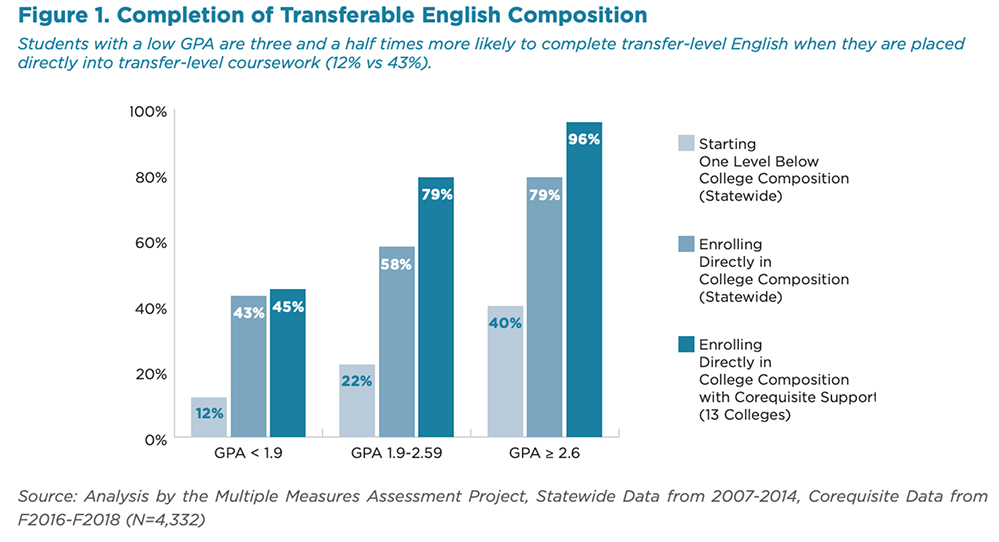 The findings hold steady for English and two typical math pathways — statistics for those pursuing the social sciences, arts or humanities, and calculus for students set for a career in business, math or science.

Together with Florida, Tennessee and Texas, California’s overhaul of remedial education at the community college level places it ahead of the pack nationally, said Jessica Brathwaite, senior research associate at the Community College Research Center at Columbia University. California’s reform efforts are “unique in that they explicitly state that they want to reduce achievement gaps,” she added, which is unusual in state mandates.

Three reports released in the past month chronicle the progress of California’s community colleges to adapt to the new rules and law. 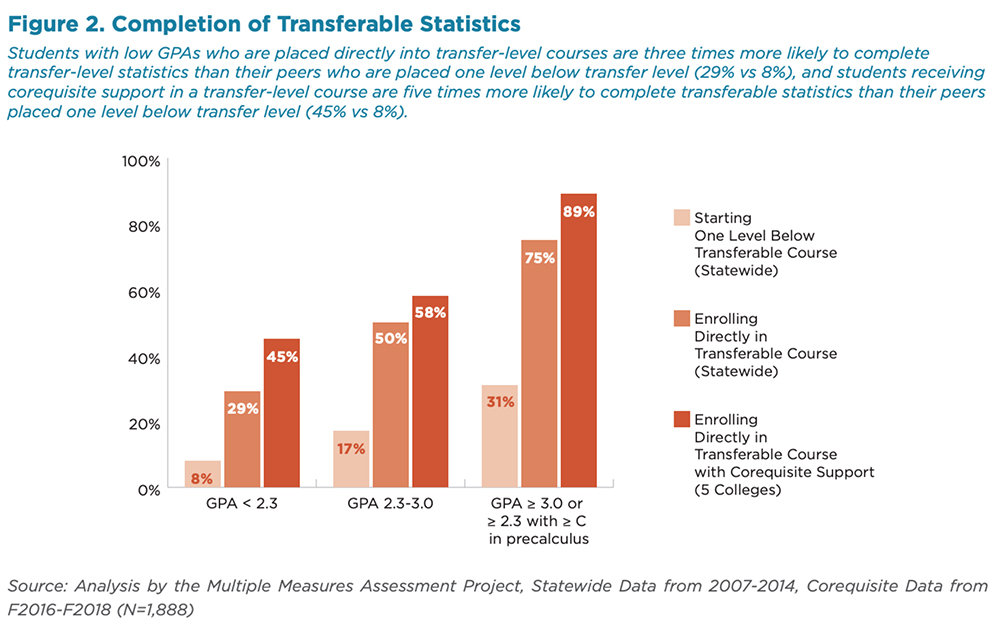 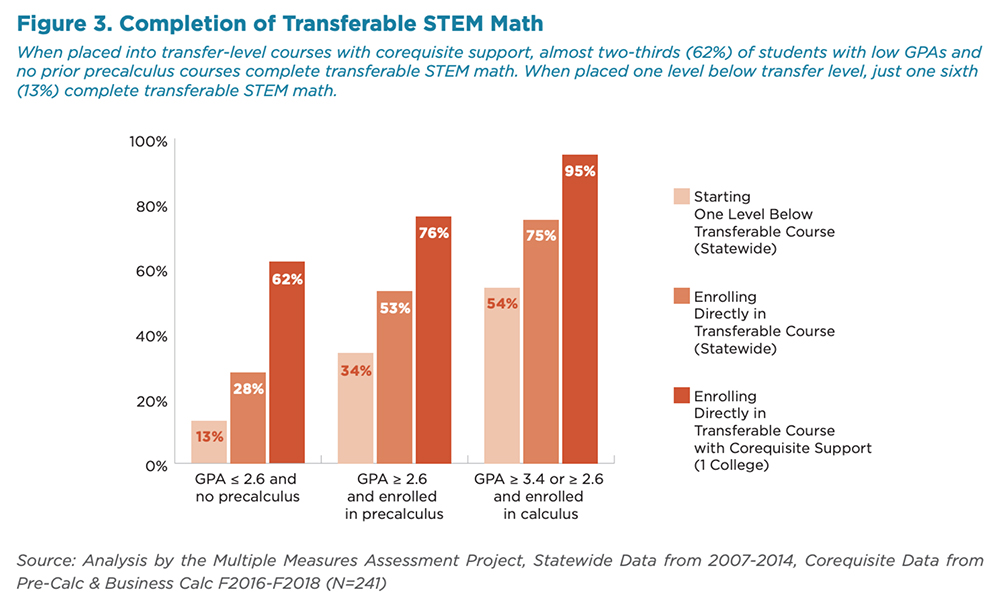 One report tracks the progress of 47 colleges — in Los Angeles, the Inland Empire and the Central Valley — as they implement the mandated remedial reforms by comparing the types of classes appearing in course schedules this year to those offered in fall 2017. If community colleges are to follow the spirit of the law, researchers would expect to see more college-level classes — to handle the upswing in students being directly placed there — and fewer remedial classes.

For those who need to brush up on key concepts, the studied colleges are rolling out “corequisite” courses that combine additional instruction or support with college-level coursework, allowing students to receive college credit without needing a remedial course first. The report, produced by The Campaign for College Opportunity and the California Acceleration Project, shows that corequisite courses, initially viewed as an experimental approach to remedial reform, are now a feature in a majority of the 47 colleges in the analysis. (The Campaign sponsored the 2017 law that ushered in these remedial reforms.)

The report “is telling seniors in high school as well as their college counselors that the work you have done in high school has indeed prepared you to go to college,” said Audrey Dow, senior vice president at the Campaign.

The Campaign is sharing the findings with partner organizations that assist high school students, such as InnerCity Struggle and United Way of Greater Los Angeles, so that more will know they can enter transfer-level courses directly.

“I hope that students and families and high school counselors really understand that it is the student’s right to be placed in college-level courses on day one,” Dow said. (The law offers colleges some wiggle room to place students in remedial classes first, but the bar is high.)

The law is a major departure from a reality in which at least three-quarters of students took remedial classes just a few years ago, often being placed two or more levels below transfer. State and national studies show that few who take remedial work complete the college-level courses needed to further their studies. In the Golden State, just 24 percent of students who enrolled in remedial coursework transferred to a four-year institution after six years, according to a 2016 report from the Public Policy Institute of California; meanwhile, 65 percent of students placed in college-level coursework transferred.

Despite evidence from California research showing that virtually no student would benefit from being placed in a remedial class first, the report by The Campaign for College Opportunity and the California Acceleration Project finds that the colleges they reviewed are still keeping many of their remedial classes. At 21 of the 47 colleges, fewer than 70 percent of math classes are transfer-level. 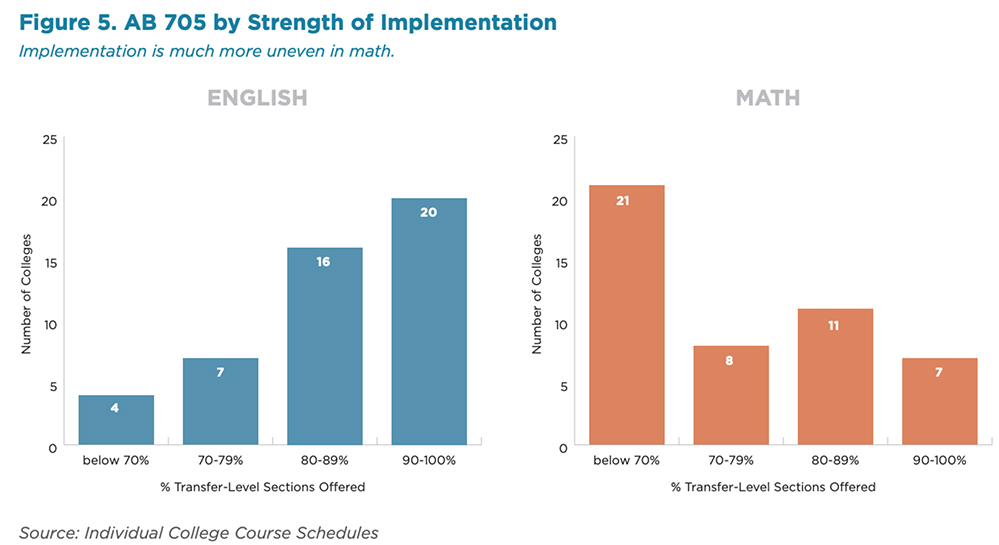 “We are particularly concerned about the equity implications of uneven implementation across the state, as students’ zip codes continue to determine their access to powerful reforms,” the report’s authors said.

Katie Hern, an English instructor at Skyline College in the Bay Area and co-director of the California Acceleration Project, said giving students the option to take a remedial course doesn’t make sense.

“If you can’t identify a group of students that benefit from taking remedial courses in terms of their chances of completion, then who are you offering all these sections for?” she asked. Students already come to college doubting their academic abilities. “If you offer them the option of placing themselves down into remedial courses, they will often take it, to their own detriment,” Hern said. It also troubles her that colleges are spending money on remedial courses when they could open more space for students seeking transfer-level work.

The report singled out the 14 Central Valley community colleges for running relatively few remedial classes. More than 90 percent of introductory English classes and 79 percent of math classes were at transfer level.

Another report, released late last month, gives renewed evidence that placing students directly into transfer-level courses who’d otherwise need remedial classes is a net gain for the state. The analysis, produced by the Research and Planning Group for California Community Colleges and the Educational Results Partnership, found that between 2015 and 2018, a time in which colleges were gradually reforming their remedial practices, the number of students passing transfer-level courses increased considerably depending on the subject.

For English, 67 percent more students passed transfer-level English classes in fall 2018 compared with fall 2015, rising to 88,600 from around 53,000. Even though the total number of students enrolled in transfer English nearly doubled between 2015 and 2018, the success rate stayed fairly steady, declining slightly to 71 percent from 73 percent. This is a considerable finding because “one might have expected success rates to decrease, as perhaps some of those students would have found themselves unprepared for the rigor of transfer-level coursework,” the report said.

Similar improvement occurred for students in transfer-level math for business and STEM majors. Between 2015 and 2018, the pass rate for these courses dropped to 58 percent from 64 percent, but the total number of students passing these classes increased to 35,000 from around 24,000 over the same period.

“What we show is that we’re not harming students, that students are being placed in transfer level and they’re rising to that expectation and they are being successful,” said Mallory Newell, a research consultant for the RP Group and director of institutional research and planning at De Anza College in the Bay Area.

But as more students enter transfer-level courses under the new state law, college instructors accustomed to educating just the top students will have to change their practices, said Terrence Willett, also a research consultant for RP Group and director of planning, research and knowledge systems at Cabrillo Community College south of San Jose.

“Before, we’ve been so restrictive with entrance into transfer level that the faculty were getting the survivors,” Willett said. Strengthening the relationships between faculty and student support services and expanding corequisite courses “should help improve success rates,” he added.

A third report chronicling the steady increase in colleges allowing more students to take transfer-level courses without having to take remedial classes first shows similar results. The Public Policy Institute of California in October released an analysis of college reforms between 2015 and 2018. It found that at the several dozen colleges that dramatically expanded access to transfer-level English, student completion rates in those classes dipped by only a percent overall. In two colleges, the drop in outcomes was 13 percent, but those colleges didn’t provide courses with corequisite support, which experts in California say is a helpful supplement to increasing performance for students who’d otherwise be in remedial courses.

Colleges had been slower to adopt the full suite of math remedial forms. The October PPIC report noted that 16 colleges significantly increased their share of students who take a transfer-level math course as their first math course. Most of that increase in access was for statistics courses. The PPIC report shows that the uptick in taking transfer-level courses as a first math class resulted in lower pass rates at those colleges. Though two colleges actually saw increases in total pass rates, other colleges saw dips ranging from 3 percent to more than 10 percent.

Still, the increase in access led the total number of students who passed a transfer-level math class in one semester to shoot up from 17 percent to 35 percent. But variation in those 16 colleges was extensive, with gains ranging from 12 percent to 62 percent. These data are likely the most welcoming for backers of the new law, as improving the share of students who pass a transfer-level math or English course in one year is a chief tenet of the new rules. For the colleges that made strides in expanding English transfer courses, the share of students who finished a transfer-level course in a semester jumped to 54 percent from 24 percent.

Despite the range in outcomes, the report’s summary states that the data show “ that thousands of students who in the past would have started college in remedial courses are now bypassing those courses and succeeding in transfer-level courses.”

Major gains were posted by all demographic groups, including blacks and Latinos.

But California’s remedial transformation gives Brathwaite pause in one regard: its reliance on corequisite courses. “They’re fine for some students, but they don’t necessarily help the lowest-placed students,” she said.