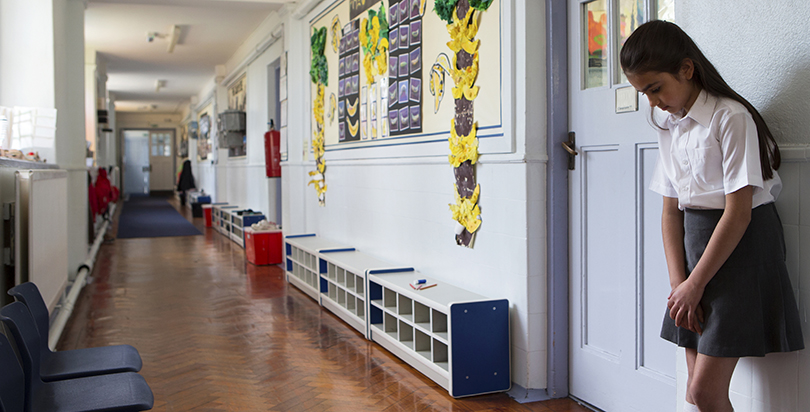 Updated 3 p.m. EST
Education Secretary Arne Duncan has urged states to reform their criminal justice systems and funnel the money currently being spent on incarcerating non-violent offenders to schools with the highest poverty rates.
“The bet we’re making now is clear,” Duncan said Wednesday afternoon at the Press Club in Washington, D.C. “In the last three decades, state and local correctional spending in this country has increased almost twice as fast as spending on elementary and secondary education. Ask yourself, ‘What does that say about what we believe?’”
Duncan’s proposal comes amid a larger Obama administration effort to reform the criminal justice system and reduce sentences. Education Department efforts have included teaming up with the Justice Department to issue guidance on reforming school discipline procedures and rerouting the school-to-prison pipeline for young men of color.
The secretary also cited the emerging bipartisan consensus on the issue of sentencing and prison reform. "Whether you're on the far left, far right, there's a tremendous, acute awareness that mass incarceration hasn't worked," he said during a question and answer session after his speech. Leaders of the Senate Judiciary Committee were expected to release a bipartisan proposal to give judges more leeway in sentencing nonviolent offenders and help inmates leave prison sooner if they complete educational or treatment programs, NPR reported.
As Duncan sees it, if states and local governments found alternatives to incarceration for half of people convicted of nonviolent crimes, the country as a whole would save about $15 billion. Reinvesting those savings into the 20 percent of schools in each state with the greatest number of poor students could then boost teacher salaries at least 50 percent.
“With a move like this, we’d not just make a bet on education over incarceration, we’d signal the beginning of a long-range effort to pay our nation’s teachers what they are worth, for the nation-builders they truly are,” Duncan said.
Alternatively, Duncan suggested state and local governments use about a quarter of the $15 billion savings to create five teacher-leader positions at those high-poverty schools. These educators, who would mentor other teachers, would receive a $25,000 pay increase.
“There are lots of ways to go about this, and ultimately, local leaders and educators will know what’s best for their community. But the bottom line is that we must do more to ensure that more strong teachers go to our toughest schools and stay for the long haul,” he said.
Helping young people stay in school will help keep them out of jail, Duncan argued: More than two-thirds of those in state prison are high school dropouts, and a 20-to-24-year-old black man without a high school diploma has a stronger chance of being imprisoned than having a job.
Other facts that Duncan cited about the country’s staggering prison population: America has less than 5 percent of the world’s population but more than 20 percent of its inmates; young men of color are six times more likely to be incarcerated than white men; one out of every three black men in the United States will likely go to prison at some point, but only one in five will receive a college degree.
But “you don’t have to be a liberal romantic” to see the value in reducing incarceration rates; a “hard-nosed look at the bottom line”, Duncan argued, leads to the same conclusion.
The achievement gap between the United States and other advanced nations costs more than $2 trillion in economic output every year. A 10 percent increase in the high school graduation rate would reduce murder and assault arrests by about 20 percent. A one percent increase in the male graduation rate would save up to $1.4 billion in the “social costs” of incarceration.
Although funding is vital, it’s only part of the solution to ending the school-to-prison pipeline, Duncan said.
America must address poverty, violence, segregation, job opportunities, health disparities, and other issues. But just as importantly, teachers and school leaders must confront their own biases that send certain children – primarily boys of color – down the path to the country’s criminal justice system.
It is painful for teachers and others in education, who have devoted their professional careers to helping children, to admit that their own internalized biases may be harming those same students, Duncan said.
“It’s difficult work, challenging centuries of institutionalized racism and class inequality. But I firmly believe a hard look at ourselves is an essential part of becoming the nation we strive to be: one of liberty and opportunity, regardless of the circumstances of your birth.”
Click here to read Duncan’s prepared remarks.
Photo by Getty Images
Submit a Letter to the Editor
September 30, 2015

This Week’s ESSA News: How States Like West Virginia Can Strengthen Mental Health Supports Even Amid a Pandemic, How Districts Are Bracing for Budget Cuts, Why Arts Education Matters & More