Applying to HS in NYC Is More Like Applying to Med School. This App Can Help Students Find the Right School for Them 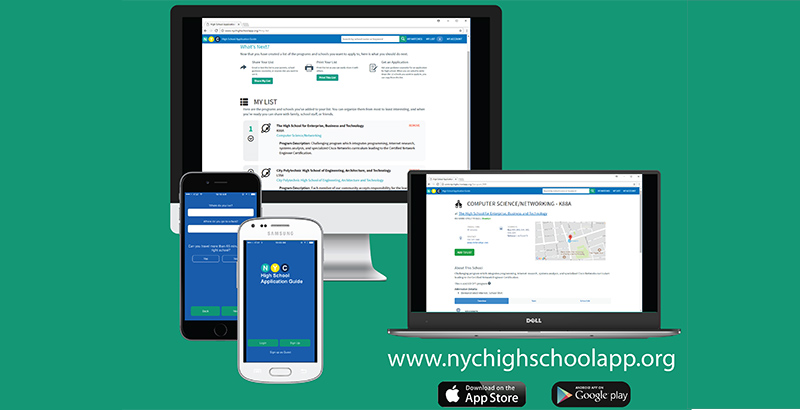 Selecting a high school in New York City presents an experience unlike anywhere else in the country. While the average American student has little choice of which school to attend, NYC eighth-graders must rank their top 12 selections from more than 700 options scattered throughout the city in a multi-step matching process. It’s more like applying to medical school than high school.

As Round 2 of the selection process gets underway this weekend, an app created by New York University is giving the city’s 75,000-plus eighth-graders, their guidance counselors, and their families a new perspective on the matching system and making it a bit easier to navigate.

The NYC High School Application Guide is a “lifeline for us,” Angel Perez, a guidance counselor at Harbor Science & Arts Charter school in Harlem, tells The 74.

“The goal is not to find the best high schools, but find the best fit for the student,” he says. “That takes a lot of research that is very intense and can be very daunting.”

Says Harbor eighth-grader Hailey Troche, “Before, I was lost checking what high school to find.” But by using the guide, “I found a bunch of schools near me that I actually liked.”

Launched by the New York–based Heckscher Foundation for Children and taken over by NYU in 2017, the application guide offers desktop and mobile assistance in sorting through the high school options. It was initially envisioned as a virtual guidance counselor for students without much adult support at home or school, nudging them toward higher-performing schools within their interest area, says Sean Corcoran, associate professor of economics and education policy at NYU Steinhardt School of Culture, Education, and Human Development.

But the app has a larger aim as well.

Says Jennifer Jennings, professor of sociology and public affairs at Princeton University’s Woodrow Wilson School, who works with Corcoran on the guide, “There certainly is an equity goal here in terms of reducing racial and socioeconomic disparities in access to higher-performing schools in the city.”

NYC Department of Education data show that just under 50 percent of students are matched with their top choice and over 70 percent land in one of their top three, making it critically important for students to list the right schools for them. Appealing the decision is extremely difficult.

The app made its debut two years ago as a pilot program in 80 middle schools. This past year, it was used in 160 schools, and Jennings and Corcoran say they are looking to expand participation while tweaking the algorithm to find the best parameters — including each high school’s graduation rate — to filter the results.

“We have tried to create a framework which using this app is easy for guidance counselors,” Jennings says. “Like any development effort, we are constantly figuring out new pieces.” The guide asks students questions about their interests and home location to suggest a list of schools to investigate. It then helps students walk through the process with a notes page, so they can keep track of likes and dislikes, and offers a timeline checklist to keep them on track in meeting deadlines.

“It becomes a visual for the children to see exactly what their options are,” Perez says. “It shows graduation rates, travel time, open house dates.” The app guides students toward options they might not have otherwise considered, aids them in drafting applications, helps them understand program codes — John F. Kennedy High School, for example, has five separate programs in one school building — and allows parents to stay involved in the checklist by providing a “failsafe system” for meeting deadlines.

“We avoided a lot of the potholes of not getting applications after deadline,” Perez says. “I enjoyed the app more than [any other tool]. I think, for me, it was how it made it personal, specific to what is your interest, what is your location, and showing 20 schools you might want to look at.”

Daisy Bowman, an eighth-grader at Harbor, says she found the guide helpful because it suggested a high school focused on economics and finance that she then investigated and subsequently applied to.

The guide’s developers are closely monitoring the data coming from the app and using that information to move the guide beyond just suggesting good high school options for students. “It is great if people do end up matching to their first choice,” Jennings says. “But our hope is that the choice has characteristics allowing the student to be successful in high school and beyond.”

Adds Perez, “You have to make the best choice for you, the best school for you.”