Antonucci: When Is a Teacher Strike Legal, and What Happens If Los Angeles’s Teachers Union Walks Out This Week? 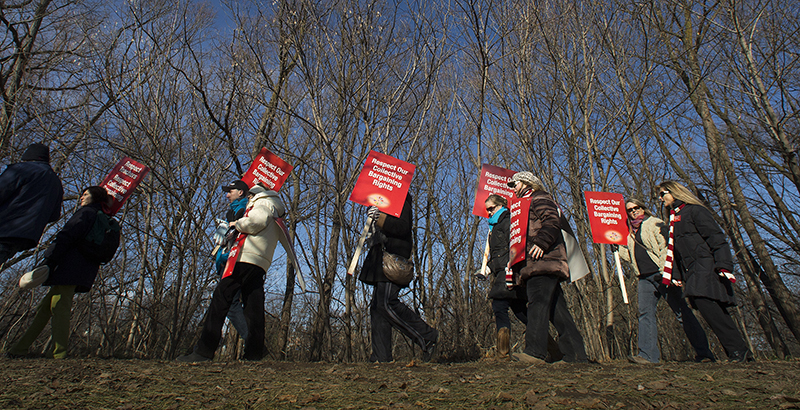 The Los Angeles Unified School District and United Teachers Los Angeles remain far from a settlement of a new collective bargaining agreement. Mediation is set for Thursday, but no one seems optimistic that it will have a positive outcome.

Union members have authorized their leaders to call a strike, but California law requires that a series of steps be followed before a public employee strike can be considered legal. The provision that directly affects the situation in Los Angeles today is Article 4, Section 3543.6 of the California Government Code, which states it is unlawful for an employee organization to “refuse to participate in good faith in the impasse procedure set forth in Article 9 (commencing with Section 3548).”

Mediation is the first step of the impasse procedure, and we have already seen the gamesmanship it can involve. The union wants to get the process underway as quickly as possible, and so it has expressed dismay and anger at the district’s selection of Thursday for the first mediation session. For its part, the district wants to put off the day of reckoning as long as possible.

What happens after Thursday?

State law has no requirement for how long mediation must last. The mediator has a minimum of 15 days after his or her appointment to effect a settlement. That date has already passed.

The next step the law requires, absent a settlement, is that the mediator “declares that fact-finding is appropriate to the resolution of the impasse.” How long this might take is uncertain. For comparison, the Los Angeles County Education Association, the union for the county’s Office of Education employees, went to fact-finding after only two mediation sessions. The teachers union might want to get to fact-finding that quickly but has to ensure it doesn’t leave itself open to charges of failure to “participate in good faith.”

If the mediator recommends fact-finding, either party may request that a panel be formed. Each side chooses one member, and the state Public Employment Relations Board chooses the third. That takes a maximum of 10 days. The panel then has a maximum of 30 days to issue a non-binding report.

If fact-finding takes the maximum amount of time, the union couldn’t strike before Election Day.

This gives the union three options: 1) Wait for the process to complete in its own time; 2) Do everything possible to speed it up; or 3) Strike before the process is complete.

The first option keeps the union beyond reproach legally but sacrifices control over the timeline of its job actions.

The second option carries the risk of an unfair-labor-practice charge by the district, but as long as the impasse procedure is completed, the strike itself would not be illegal and the union might still work it in before November.

The third option is the riskiest, but it’s not entirely out of the question. Back in March, UTLA President Alex Caputo-Pearl held up the West Virginia teacher walkouts as a model. “While every region has its own idiosyncrasies, the illegal strike organized by educators in West Virginia was rooted in the same dynamic we face in Los Angeles — a basic threat to the sustainability of public education,” he wrote.

The district would have its own remedies, of course. Even the union’s strike preparations could be used to illustrate that it had no intentions of good-faith participation in impasse procedures.

If the union walks out early, the district could ask the state’s Public Employment Relations Board to file for an injunction against an illegal “economic strike.” A court could then order Los Angeles teachers back to work.

But even that might not be the end of it. Teachers unions have defied back-to-work orders in the past, most recently last week in the state of Washington. The L.A. union might risk legal sanctions in the calculation that the ultimate settlement would be worth it and would result in the dismissal of any charges.

What legal pressure would the union face? At least as far as the state board is concerned, less than you might think. The board has the authority to “to order an employee organization to pay damages to make an employer whole for necessary expenses incurred and economic losses suffered as a direct result of the employee organization’s unlawful strike activity prior to the completion of statutory impasse procedures.”

However, the board is not required to award “make whole” damages, does not have the power to impose punitive damages, and may compute damages to be zero. In one precedential case, a district sought damages from the union for the cost of substitute teachers and mailings to parents because of an illegal teacher strike. The board ruled that this was appropriate but noted that “the district’s savings on striking teachers’ salaries was more than the district expended on substitute teachers and the printing and mailing of letters to parents.” Therefore, the board awarded no damages.

As complicated as all this is, the legal ramifications are only one part of the calculus that both L.A. Unified and the union are using to determine their strategies. An advantageous settlement — however each side defines it — would mitigate, perhaps even entirely remove, any scars caused by how it was achieved.