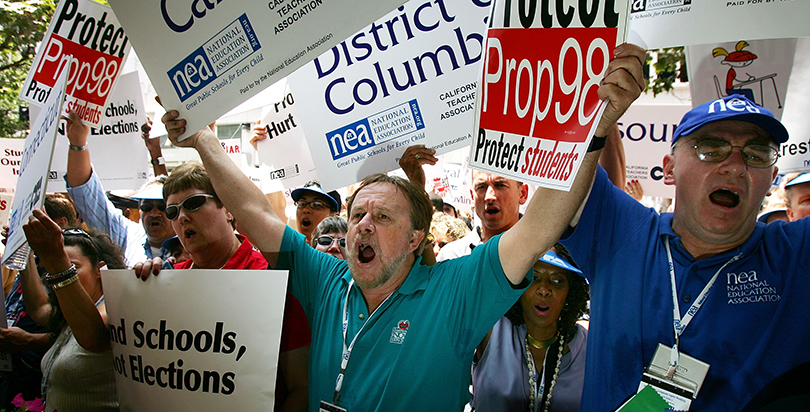 Mike Antonucci’s Union Report appears Wednesdays; see the full archive
The National Education Association is highly committed to ensuring the presence of members of racial and ethnic minorities on all of its representative bodies. Guarantees at all levels — national, state and local — are written into the union’s founding documents. These guarantees are so important to NEA that they helped derail a proposed merger with the American Federation of Teachers in 1998 because AFT lacked such guarantees.

This provision came into play in 2002 after the union had been run for 13 years by two white males — Keith Geiger and Bob Chase. The two candidates for the presidency that year were Reg Weaver and Denise Rockwell, both African Americans.

NEA’s bylaws get even more specific. Members from ethnic minorities have to comprise at least 20 percent of the budget committee. The staff members the union hires must mirror “at least the same ratio of any ethnic minority as is that ethnic minority to the total population of the United States.”

Finally, an NEA provision (Bylaw 3-1.g) governs the ethnic-minority composition of the NEA Representative Assembly, the 7,000-member body that meets once a year to elect officers, approve the budget, and establish the union’s priorities.

Each state affiliate sends an allotted share of delegates to the RA in accordance with the size of its membership. The bylaw calls for each state to send delegates “at least equal to the proportion of identified ethnic-minority populations within the state.” Failure to do so can result in censure, suspension or expulsion for that affiliate.

In reality, though, each year many affiliates fail to achieve the proper ratios. NEA then provides advice and guidance on how to improve, but to my knowledge no affiliate has ever suffered appreciable consequences for violating the provision.

At the 2016 RA, about one third of the 7,026 delegates identified themselves as racial or ethnic minorities. But overall totals hide details that indicate NEA is not as diverse as it believes itself to be, despite its extraordinary efforts to reach percentage targets.

The union’s first problem is that it uses the composition of the U.S. population for its comparisons. According to the 2010 Census, which is what NEA used as its benchmark, the ratio of minorities in the U.S. population as a whole was 36 percent, but the ratio of minorities teaching K-12 public schools was 18.1 percent. In order to reach its goals, the union must recruit and elect representatives from a pool that is half the size.

That it manages to approach its goal is commendable, but it does so greatly skewing the ratios of some minority groups at the expense of others.

The 2010 U.S. population was 12.2 percent African-American and 0.7 percent Native American and Alaska Native. NEA’s RA delegates were 19.2 percent and 1.9 percent, respectively, in those categories. The difference was even greater when comparing RA delegates with the teaching population only. African-Americans made up only 6.8 percent of K-12 public school teachers, and Native American/Alaska Natives only 0.5 percent.

Remove California, and the rest of the RA was only 4.7 percent Hispanic and 1.6 percent Asian-American. Omit Hawaii as well, and the Asian-American share fell to 0.9 percent.

RA delegates are individuals, but it would be odd if the composition of the entire assembly did not affect the policies of the union and the perspective it has on the issues of the day. We already know that the RA is woefully short of delegates under the age of 35. Is it such a leap to assume pensions and seniority protections would occupy the delegates more so than new teacher training? And if that’s the case, why wouldn’t it also be true of racial and ethnic identity?

Republicans often complain that NEA overwhelmingly supports Democratic politicians and policies, even though as many as one third of its rank-and-file members are Republicans. But if the union’s foremost decision-making body is composed of representatives whose racial and ethnic groups tend to lean even further towards the Democratic party, then NEA’s choices are not so mysterious anymore.

NEA must believe one’s racial and ethnic identity affect one’s outlook on education policy, or it would not have instituted minority guarantees in the first place. But the union seems content with its record of minority representation writ large, instead of proportionally representing its entire population.