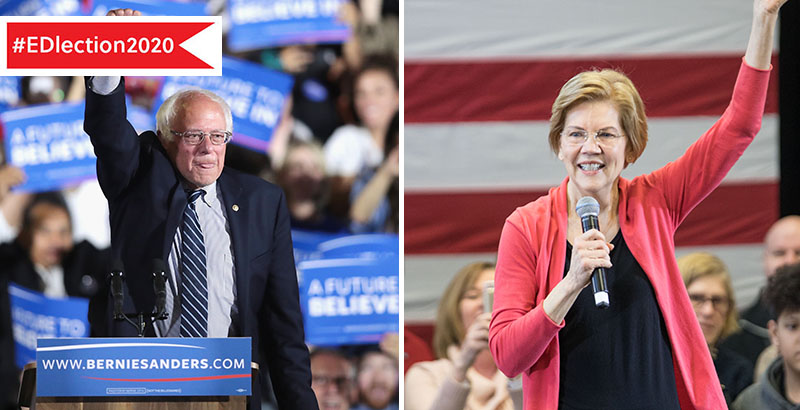 This week, a poll released by Democrats for Education Reform revealed that “voters know that a one-size-fits-all approach to education doesn’t work” and that 81 percent of Democratic primary voters support public school choice, including charter schools.

Support was even higher for black primary voters (a whopping 89 percent).

The poll also found that 52 percent of the public oppose a moratorium on federal funding for charter schools, a solid rejection of unions and the retail civil rights organizations they fund to propose such attacks.

So, where is the opposition coming from? There are two groups that show outsize opposition to charters: unionized public school teachers and highly educated whites. That follows a previous DFER research study that said “Democratic voters of color were more than twice as likely as White Democratic voters to hold favorable opinions of public charter schools.”

Clearly, leading Democratic contenders in the presidential race are pragmatically siding with unions and privileged whites over everyone else. That’s sad for a party claiming to represent people on the margins of social power.

But, I understand. This is how politics works. In our duopoly, one signs on as either a Republican or Democrat, and then passes through a qualifying process that demands the candidate take a stand on polarizing issues like abortion, guns, climate change and civil rights.

For a long time, the division on the education issue wasn’t as deep as it is now. It enjoyed a reasonable degree of bipartisan support. Both sides attempted to outdo the other by producing a candidate worthy of the label “education president.” Presidents Clinton and Obama pushed hard on charter schools, common standards and teacher quality. President Bush shoveled money into school systems, demanded equitable distribution of quality teachers and signed off on the bipartisan No Child Left Behind legislation.

Our current president — aimless and, as George Will puts it, incapable of sequential thought — has been a wellspring of good fortune to political opportunists on the left looking for a renewable bogeyman to scare the public into the arms of education’s status quo.

On the Democratic side, factions opposed to school reform have used the current administration to make reform toxic and career-damaging for those engaging in it.

To see mastery on this front, go to the recent article by Rachel Cohen in the Intercept. Cohen gives Nina Turner, co-chair of Bernie Sanders’s presidential campaign, the business for having been (eek-gad!) a former supporter of charter schools. The article links to a campaign video of Turner emphatically, effusively proclaiming that “unregulated charter school growth is damaging communities,” even though she supported a charter-friendly education for Cleveland in her role as an Ohio state senator in 2012.

It looks like a hostage video. Forced. Humiliating. Necessary to have a job.

I’m struck by the fact that even a Sanders surrogate is fair game for a dressing down by the new left. As the beloved candidate of America’s most neo-socialist, union-loving publication, Jacobin, you might expect him to escape this indignant form of scrutiny, especially given the fact that a recent Jacobin article promoted him as the only candidate teachers unions should support.

But, evil in all forms must be rooted out, even if a saint harbors it. Charters are just that threatening to the education establishment and its organized workers.

Like Sanders, Elizabeth Warren’s promise to be the second coming of Karl Marx hasn’t shielded her either. She’s faced questions about her campaign staffers’ and supporters’ ties to reform. In fact, Diane Ravitch’s group, the Network for Public Education, gave Warren a “D” letter grade for two of her campaign’s unacceptable “affiliations” with reformers.

The first is Josh Delaney, who advises the campaign on education issues. He has been dragged by teacher bloggers for the greatest education sin of all, having worked for Teach for America.

Not only that, Delaney once interned at the Alliance for Excellent Education, which Ravitch’s NPE calls “a reform leaning 501(c)(3) organization that has received almost $20 million in grant funding from the Gates Foundation.”

You are so canceled, Mr. Delaney.

The second unacceptable Warren affiliation concerns Sonya Mehta, a teacher in Oakland who introduced Warren at a rally touting the candidate’s commitment to early education. Shortly afterward, a teacher-blogger scribbled an accusatory blog post identifying Mehta as a “charter school lobbyist.” The Progressive, a publication funded by teachers unions, linked to the blogger saying “But [Warren’s] introduction at an Oakland rally by a former charter school teacher associated with a charter lobbying organization was seen by some as a calculated signal that she is more supportive of charter schools than her progressive rival, Bernie Sanders.”

In fact, all of this was a damaging fiction generated by a rabid anti-reform internet network that includes petty tweeters, unionists, educators and one polemicist moonlighting as an education historian.

And that’s what rules the roost in the Democratic camp now that the internecine war of educational values is tilting toward the whites. Young, talented and promising people of color have their careers stained by a largely white network of ideological thought police who are so desirous to stop education reform that they don’t mind making casualties of the very people they claim to represent.

While they try to poison the well, real Democrats better rescue the faces at the bottom of it.