And Then There Were Seven: What We Know About Every Candidate’s Education Agenda 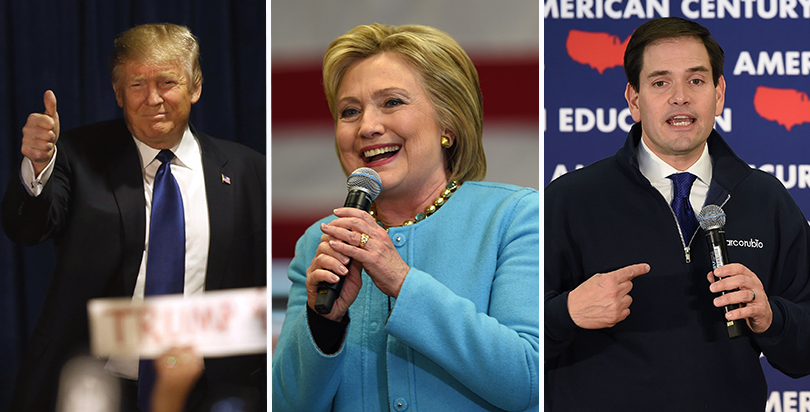 Updated — Jeb Bush announced he was suspending his campaign in South Carolina Feb. 20; Jim Gilmore announced that he was exiting the Republican presidential primary race Feb. 12.
After months of campaigning, more than a dozen primetime debates and tens of millions of dollars’ worth of TV ads, the presidential primary votes are rolling in — and the candidates are falling like dominoes.
Democrat Martin O’Malley exited the race after Iowa. Following poor finishes in New Hampshire Tuesday, both New Jersey Gov. Chris Christie and former CEO Carly Fiorina announced they were dropping out of the race. Jim Gilmore stepped away soon after, and Jeb Bush announced in South Carolina that he was calling it quits.
What started with 22 hopefuls has been narrowed down to a field of even.
Since our New Hampshire Education Summit, The 74 has been there every step of the way, hoping for serious discussions of the policies affecting American students. Alas, all we’ve heard are sound bites and taglines — and more than a few dishonest one-liners.
So why so little K-12 debate? Rick Hess of the American Enterprise Institute argues that in previous elections where education was prominent, the issue was driven by candidates rather than voters, and the 2016 candidates just don’t seem to care. New America senior researcher (and 74 columnist) Conor Williams puts the blame on the Every Student Succeeds Act, saying that that political bargain successfully bumped education from the election agenda — and that the next president will have even less influence in the country’s schools than previous leaders.
But you can’t blame an education news outlet for dreaming. There are still nine candidates vying for the Democrat and Republican nominations — and one prominent independent waiting in the wings. Each candidate has a stated position on education policy, which we have included in our comprehensive #EDlection2016 Election Cards. Here’s everything we know about the top education issues driving the remaining candidates (in no particular order):
Hillary Clinton: Early Childhood Education

The former Secretary of State has called for an increased federal investment to provide high-quality pre-K for all four-year-olds in the country within 10 years. From what she told the American Federation of Teachers in a candidate questionnaire:

“I think any discussion of improving our public schools must include universal access to pre- kindergarten. I believe we can start to close the achievement gap by investing in programs that increase children's school readiness and academic preparation while making it easier for parents to balance their responsibilities at work with their responsibilities to their children. We know children's brains develop more rapidly at this time in their lives than at any other and that high quality interventions make a real difference in the outcomes of children from low-income families.” 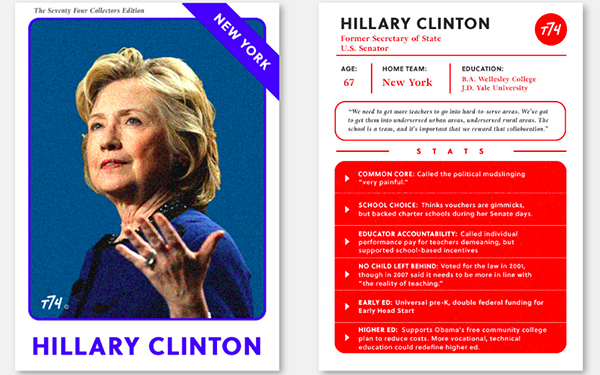 Click to see larger version
In a South Carolina town hall hosted by Roland Martin in November, Clinton reiterated her support for school choice, and demanded that policymakers do more to hold failing charter schools, as well as failing traditional public schools, accountable (read our exclusive interview with Martin about the exchange):

In early November, Marco Rubio sat down for an exclusive in-depth conversation about K-12 education with The 74’s Campbell Brown. Among the highlights:

“Most Americans either have the means to send their children to private schools or can move to a neighborhood with better public options, but low-income people do not, and that’s wrong,” he said. “It’s immoral that the only people in America who have no control over where their kids go to school are low-income parents.”
Rubio said he wouldn’t, however, generally use the power of the presidency to push change on states and schools: “I think one of the best things that a president can do to move forward on K-12 is to not involve the federal government in its details,” he said.
Rubio also thinks the U.S. Education Department should be abolished: “This is not about ideology, this is about the practical reality that why do we have a Department of Education when the federal government really has no role to play in K-12 education.”
Donald Trump: Common Core’s a Yuge Mistake
At this point, it’s an open secret that Donald Trump’s campaign has been long on big, big promises but relatively short on details.
On education and the country’s schools, Trump’s entire platform seems to be built around purging the nation of Common Core — and blaming Jeb Bush for supporting it.

I will end common core. It's a disaster. #MakeAmericaGreatAgain #Trump2016

In the one and only video he’s released on the subject, Trump tied Common Core to what he said was astronomically high education spending as compared to other countries and a “28th in the world” ranking. (The Washington Post’s fact checkers gave that ad three out of four Pinocchios.)

More recently, he misspoke during a speech in South Carolina Feb. 10, saying that he’d “keep” Common Core. A few minutes later, as Twitter erupted with confusion, Trump tweeted an immediate clarification, saying “I was referring to the fact that Jeb Bush wants to keep Common Core” and “I have been consistent in my opposition to Common Core. Get rid of Common Core — keep education local!” 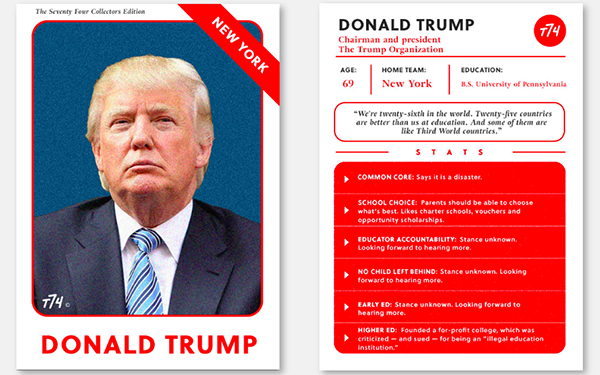 Click to see larger version
Ted Cruz: Give Parents the Money to Aid School Choice
The Texas senator, who hasn’t discussed education much on the campaign trail, introduced legislation in January that would create an education savings account program for students in the District of Columbia. Students would receive between 80 and 90 percent of their per-student allocations, depending on their family’s poverty level, and students with disabilities would receive the 90 percent allocation. The money could then be used at private schools or for tutoring or other educational expenses.
There is already a smaller-scale voucher program in the District of Columbia. That program, unlike Cruz’s, only applies to participating private schools, and is paid for using federal funds.
“School choice continues to be the civil rights issue of our era. Each and every child has the right to access a quality education. Not only does school choice give low-income children the same choices and opportunities that children from wealthy families have always had, it also improves the public schools, making them stronger and more effective,” Cruz said in the press release announcing the legislation.

For years Cruz has eviscerated the Common Core standards (see above) as a move by unelected federal bureaucrats to dictate and control curriculum that, he says, should be determined at the local level. 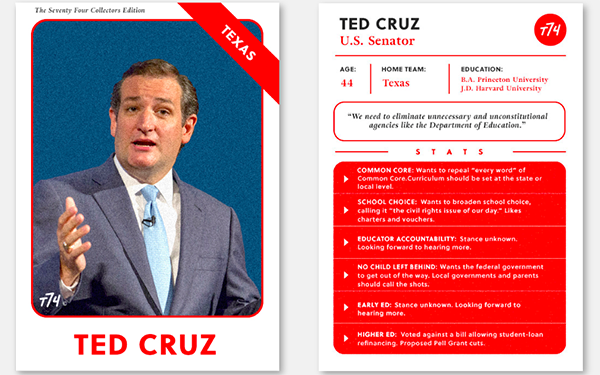 Click to see larger version
Bernie Sanders: Free Public College
Young voters are feeling the Bern, and the Vermont senator’s policies indicate he loves them back. As far as education is concerned, Sanders is best known for focusing on higher education, and for pushing for free community college (an idea floated by President Obama, which Hillary Clinton also supports) and free tuition at public four-year schools. He’d also allow the lowest-income students to use financial aid to cover room and board, living expenses and textbooks; cut student loan interest rates; and allow borrowers with older loans to refinance at the current lower rates. He’d pay for the estimated $75 billion-per-year price tag by taxing Wall Street speculation.

“For 100-plus years, what we have believed public education to be is up to the 12th grade, free public education up to the 12th grade. Guess what? The world has changed. A college degree today is the equivalent of what a high school degree was 50 years ago. People want to criticize me? Fine. I believe that every kid in this country who has the ability and the desire should be able to get a higher education regardless of the income of his family. And I will pay for that through a tax on Wall Street speculation.” 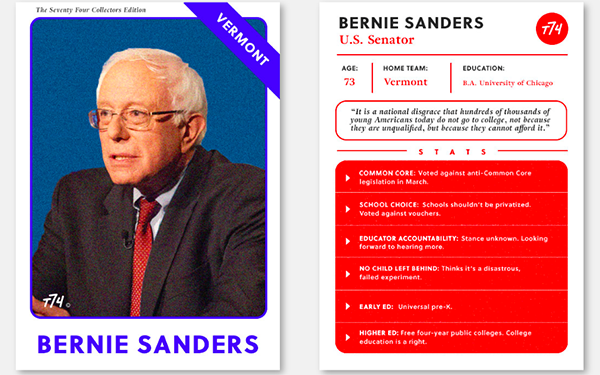 Click to see larger version
Ben Carson: Homeschooling is best
Ben Carson sat down with The 74 last November for an exclusive talk about education:

In addition to wishing the Common Core a “quiet death,” Carson primarily focused his comments on school choice and the values of parents teaching children themselves: “We consign a large number of our students who live in the wrong ZIP codes to failing schools,” Carson said, underscoring the fact that the remedy for nearly every problem in K-12 education is school choice. “We know that the very best education is home school. The next is private school, the next is charter schools, and the last is public schools. If we want to change that dynamic, we have to offer some real competition to the public schools,” he said.

John Kasich joined The 74 at the New Hampshire Education Summit last August, where he pointed to several education turnarounds and triumphs in Ohio as the kinds of local efforts he would support as president.

Kasich, now in his second term as governor, said improving K-12 education in the U.S. requires a “robust” school choice program, whether through charter schools or a voucher system. He also expressed his support for increased vocational training and student internships…mentoring programs and anti-drug initiatives. He said he’d also like to see administrators more willing to take risks and innovate.
“We cannot worship at the altar of status quo in K-12 education,” he said.
One way Ohio has innovated: an elementary reading program, which Kasich says helps struggling children learn to read at grade level before moving on to the next grade. “Libraries, teachers, local communities, senior citizens have all come together to help kids read at the third-grade level and performance has gone sky-high,” he said.
…and Michael Bloomberg?
Several recent published reports have indicated that former New York City mayor Michael Bloomberg is now considering running for president as an independent — particularly if Donald Trump and Bernie Sanders win their respective nominations. For any voter concerned about education issues, Bloomberg would instantly become the candidate with the longest list of education accomplishments. (Though in a recent 74 column, Andy Rotherham and Richard Whitmire said even if Bloomberg runs, education is unlikely to become a top issue)
Among the most recent headlines involving Bloomberg’s track record on education: A NYU report that showed the mayor’s controversial decision to shut down some of the city’s worst schools benefitted future students. A quick summary of that research:
Earlier in the Campaign…
Jeb Bush talks with The 74 about high standards in Florida schools:

Carly Fiorina talks with The 74 about local control for schools: