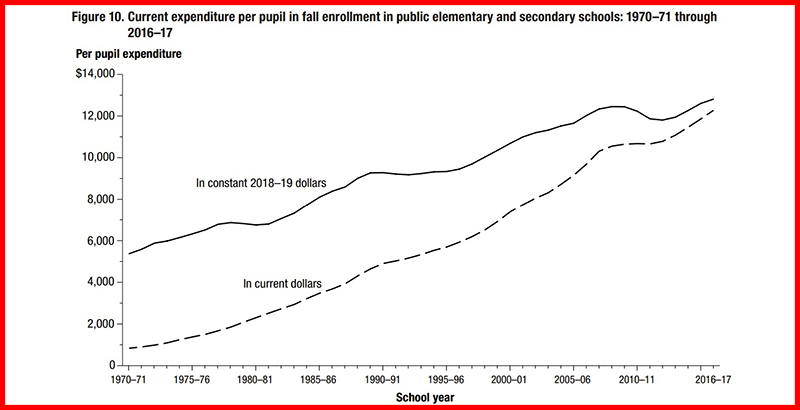 At 651 pages, the U.S. Department of Education’s recently released Digest of Education Statistics isn’t so much a digest as an encyclopedia of every relevant number concerning schooling in this country. It takes years to compile the figures, so they are not up to the minute, but the researchers also add their projections for the next 10 years. We get a clear picture of what has happened, and what is likely to happen in the near future.

The document has almost everything you need to know about education, both public and private, but here we will limit ourselves to two topics: expenditures and staffing.

Because we so often hear about how America shortchanges education, it’s worth knowing that we spent an estimated $1.5 trillion in 2018-19 on education at all levels. That’s about 7 percent of the U.S. gross domestic product. Spending on K-12 schools totaled an estimated $832 billion, of which 92 percent went to public schools.

The history of K-12 education spending shows a consistent steady rise, and when dips occurred, they were quickly rectified. Since the recession, inflation-adjusted spending on K-12 public schools increased 7 percent. 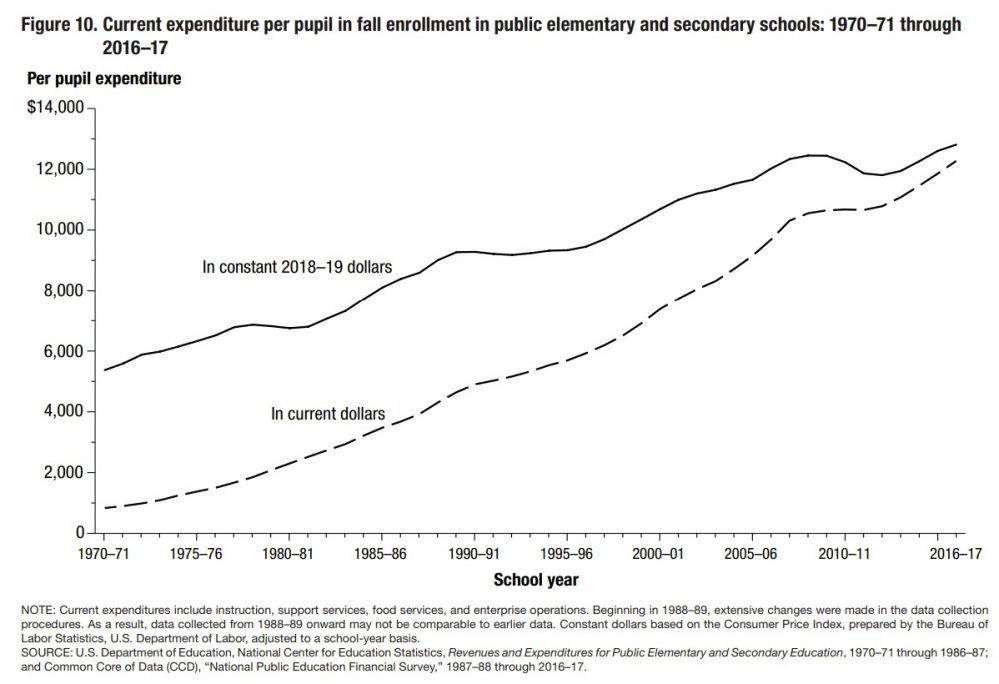 Even without reckoning costs related to COVID-19, the National Center for Education Statistics expects average spending per public school K-12 pupil in the United States to cross $20,000 annually by 2029-30, with total expenditures nearing $1 trillion a year.

Education is a labor-intensive enterprise, so most of this money goes to pay and benefits for employees. But if policymakers have to choose between increasing compensation for current workers and adding more employees, they seem to prefer the latter.

There were 50.6 million students in public elementary and secondary schools in fall 2019 and 6.6 million full-time equivalent employees, fewer than half of whom were teachers. That’s one public school K-12 employee for every eight students.

All these hirings may be justified, but they are less and less tied to student enrollment. The NCES projects that there will be 434,000 additional students in K-12 public schools by 2029 and 214,000 additional teachers, or one more teacher for about every two more students.

There are other disconnects between students and teachers. As you might imagine, the gender split among students is very close to 50-50. But the teaching force is 76 percent female, a proportion that has increased over the last 20 years. Only 48 percent of K-12 public school students are white, but 79 percent of teachers are. There was actually a lower percentage of Black teachers in 2017 than there was in 1999.

Education staffing is unlike that in most other sectors. Instead of setting hiring levels to match the work to be done, public schools set hiring levels to match the funds available. And despite the perennial alarms about teacher shortages and impending retirements, the public schools have consistently hired about 250,000 brand-new teachers each year in the last decade, regardless of economic circumstances. The NCES even expects this number to increase over the next 10 years.

It’s possible that the pandemic will make all these projections moot, but I suspect that after an adjustment period we’ll see the growth of spending and staffing resume its normal slope. Whether that will be an encouraging development remains to be seen.