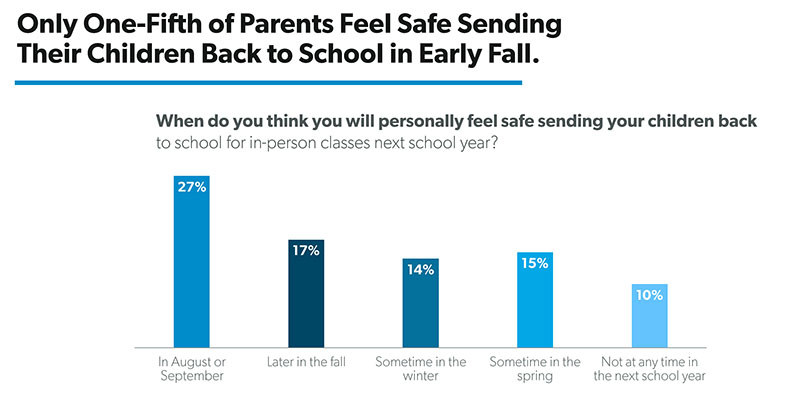 On June 30, Sen. Lamar Alexander convened the Senate Health, Education, Labor and Pensions Committee to hear four health experts — including Dr. Anthony Fauci — provide an update on COVID-19, including how K-12 leaders and other stakeholders can open schools safely this fall. Alexander was direct in offering his thoughts: “The question before the country today is not about whether to go back to school, but how to do it safely.”

Public school parents have their own thoughts on this issue. They are worried about the educational effect of COVID-19 on their children and divided on when children should return to school. But they agree that certain procedures should be in place when schools reopen and that schools must rethink how students are educated. Their voices should be heard as Congress solicits viewpoints on reopening schools, including agreeing on a new financial package that contains support for K-12 schools.

The thoughts and concerns of these parents are chronicled by Echelon Insights in a nationally representative survey of 500 public school parents and guardians asked weekly for eight weeks — from late April through mid-June — about the effects COVID-19 is having on issues they face.

In the latest (and final) survey, administered June 15-18, three of the top four COVID-19-related concerns out of 10 options involved schools (the top worry was a family member getting the virus): 62 percent said they worry “a lot” or “some” about “school closures … negative impact on your child’s education”; 61 percent about “kids missing … social interactions with friends”; and 56 percent about kids being “on track … ready for the next grade.” These responses have been mostly constant since April.

When asked when they would “personally feel safe sending … children back to school for in-person classes,” only 27 percent said August or September, with an additional 17 percent saying “later in the fall.” Thirty-nine percent opted for sometime in winter (14 percent) or spring (15 percent), with 10 percent saying “not at any time in the next school year” (18 percent were “unsure”).

So, there’s no consensus on when reopening school should occur. And there are significant variations across different categories.

White parents are nearly twice as likely as parents of color to say they would send their children back in August or September — 34 percent versus 19 percent.

Republicans are more than twice as likely as Democrats to say this — 34 percent versus 16 percent — with independents at 30 percent.

Parents earning more than $75,000 a year are more than twice as likely than those earning less than $50,000 to say this — 39 percent versus 19 percent — with those between those income levels at 21 percent.

On another issue, while 59 percent don’t plan to homeschool or send their child to a different school, 21 percent plan to do that, with 19 percent unsure. The two primary reasons for changing schooling arrangements are concerns about health and safety (38 percent) and the quality of education (23 percent). Urban parents are more likely (27 percent) than suburban (19 percent) or rural (17 percent) parents to say they plan to do this.

What procedures should be in place when schools reopen?

A majority or more of parents offer “strong” or “some” support for four measures: notifying parents when someone in school becomes ill (63 percent); allowing vulnerable students and teachers to learn and teach from home (56 percent); providing mental health support for students and staff (52 percent); and requiring temperature checks when entering school (50 percent).

Parents also have clear views on whose opinion they most trust to determine when and how school reopens. The federal Centers for Disease Control and Prevention (24 percent) is first, followed by state and local health officials (13 percent and 12 percent). Only then do they trust governors (9 percent) and school district leaders (8 percent).

Finally, 63 percent of parents across income, racial and political groups say that in light of COVID-19, schools must rethink how students are educated, a finding fairly consistent since April.

Here are two recommendations — two lessons learned from parent voices — that should guide Congress, K-12 policymakers and stakeholders as they ponder when and how to reopen schools and support parents sending their children back to class.

First, parents want reopening decisions to be a collaborative effort between health and school officials. And they want specific procedures in place in schools to protect their children (and educators) when schools reopen.

Second, when schools reopen, parents want participation options for children. Some will return in person, full time, come August. Others need online learning until they return in the fall or well beyond that. Others may want a combined approach. This requires school districts to be flexible; students to have hardware and online and digital resources; educators to be nimble enough to support these options; and federal aid not to tie the hands of state and local officials in how to use those dollars.

COVID-19 confronts parents with unprecedented challenges. Policymakers should listen closely to their voices, exercising restraint and humility in their well-intentioned efforts to provide support for when and how schools reopen.