Analysis: Was Hillary’s Union Support Limited to (Some of) the Public Sector? 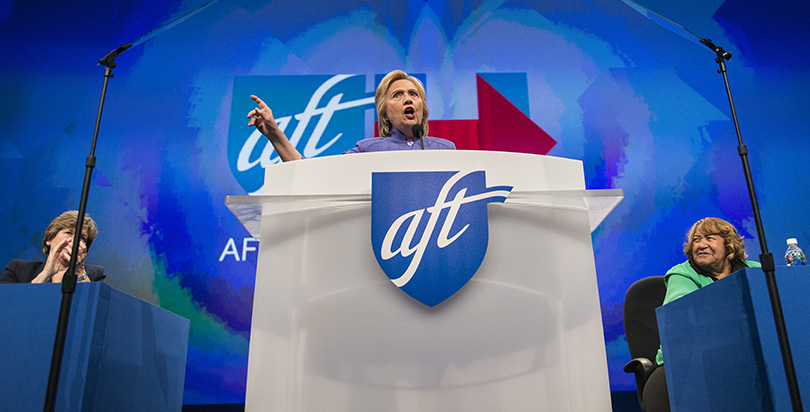 Photo: Getty Images
Exit polls from the 2016 presidential election indicate that Hillary Clinton won the union household vote by only nine points, a much smaller margin than is traditional for Democratic candidates and a contributing factor in Donald Trump’s win, particularly in the battleground states of Michigan, Wisconsin, and Pennsylvania.

Harold Meyerson of The American Prospect thinks Trump’s strength in union households may have been racial in nature. “Whites from union households preferred Trump over Clinton, 52 percent to 40 percent,” he wrote, citing an unidentified network exit poll. If accurate, race must have played a big part, but we lack enough information about those union households to make a reliable judgment.

Since 1983, when it began collecting such data, the BLS has documented a continuing decline in the percentage of private-sector workers who belong to unions, reaching a low of 6.4 percent in 2016. Public employee union membership, on the other hand, has remained relatively steady, only dropping from 36.8 percent in 1983 to 34.4 percent in 2016.

One obvious effect on the organized labor movement is greater reliance on public policy, which can sometimes lead to friction between the sectors. For example, increases in the size of government have tangible benefits for public-sector unions, but tax increases to pay for expansion may have a detrimental effect on the incomes and employment of private-sector workers.

Trump’s economic populism is targeted at the building and manufacturing trades, and offers little to like for government employees. Could this have been reflected in the voting booth?

The BLS gives us unionization rates by state, but only Barry Hirsch of Georgia State University and David Macpherson of Trinity University divide the data into public and private sectors, on their website unionstats.com. The map posted here is derived from their work.

Nationally, the difference in unionization rates between the public and private sectors is 28 points — 34.4 percent vs. 6.4 percent. But that average disguises tremendous variation at the state level. In Vermont, for example, only 5.5 percent of its private-sector workforce is unionized, far below the national average, but 45.7 percent of its public employees are union members, much higher than the national average. That’s a gap of more than 40 points.

When we look at the largest gaps in unionization rates and compare them with votes in the 2016 presidential race, we get some intriguing results.

The trend gets less solid the closer to the average you get, but it does not disappear.

There are exceptions, of course. Clinton won Virginia by 5 points, though the state has a gap of only 7.5 points. However, the preponderance of evidence suggests that states with larger public-sector unions relative to their private-sector counterparts voted for Clinton by large margins, while Trump was generally victorious where differences in membership were smaller.

Along with their connections to voting patterns, participation in the different union sectors tells us something else important: The only strong union states are those with strong public employee unions. The union share of the private-sector workforce doesn’t reach 15 percent in any state, but 41 states have public-sector unions that exceed a 15 percent share of workers.

The question for the near future is whether Trump’s presidency will unite all unions against him, or whether he’ll be able to exploit their differences — as he appears to have done in the election. I am sure the unions have hopes, but I am not sure they have a strategy.