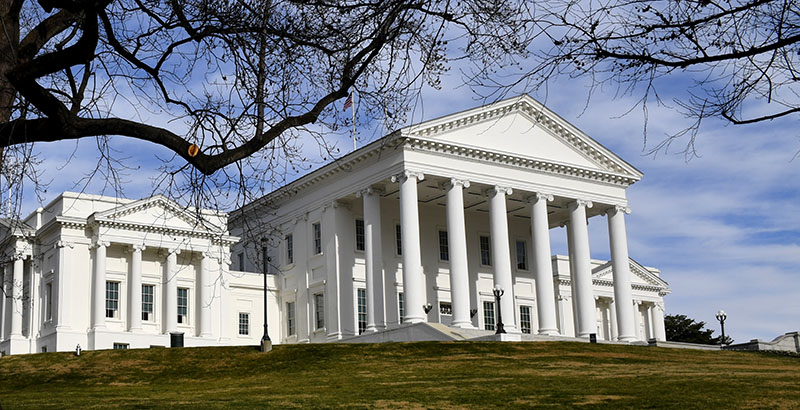 Last November, Democrats won majorities in both houses of the Virginia legislature. With Democratic Gov. Ralph Northam in place, the party gained full control of the state government. Public-sector unions are wasting no time to try to get friendly legislation passed.

The most important item on the agenda is HB 582, which would allow local government entities, including school districts, to engage in collective bargaining with their employees. Virginia is currently one of a handful of states that ban the practice. The bill passed the Virginia House of Delegates, 54-45.

The Virginia Education Association and a coalition of public employee unions have mounted a major lobbying campaign in favor of the legislation.

“Collective bargaining will provide a forum in which employers and employees can join together to tackle such problems,” said Dan Hale, an elementary school teacher. “This is not an ‘us versus them’ scenario. Again, it is about working collaboratively for the betterment of all.”

The state teachers union echoes that line of reasoning, asserting that “collective bargaining for educators is good for everyone.” Among its many virtues, the union claims, is a reduction in staff turnover.

The odd thing is that the union has been bargaining collectively for years — not with school districts, but with its own employees.

Virginia’s ban affects only public employees. The union is a private organization, and those who work for it are private employees. Free to collectively bargain, the union’s employees formed their own union, called the Virginia Professional Staff Association. The association represents an estimated 40 labor relations specialists, called UniServ directors, and other professionals who work at the union’s headquarters in Richmond.

Far from the collaborative nirvana depicted in its talking points, the teachers union’s own experience of collective bargaining is filled with lawsuits, grievances, no-confidence votes and sanctions.

In October 2012, the staff union walked an informational picket line outside VEA headquarters during contentious contract negotiations. Management quickly reached a deal but the next month laid off at least seven employees.

In 2014, the association filed suit against the union, claiming a breach of contract when VEA decided to eliminate or reduce a specific staff retiree medical stipend. The staff union wanted the matter sent to arbitration, and the court agreed. The two sides ultimately reached an out-of-court settlement, though it took another two years.

Soon after the settlement, the staff union began to air its discontent with its union managers. One of its main concerns was… staff turnover. It posted this photo on its Facebook page in August 2017:

A picture is worth a thousand words…

In February 2018, the association asked its parent union, the National Staff Organization, to impose sanctions on VEA, accusing union management of engaging in “intimidation tactics.”

The next month, the staff union delivered a vote of no confidence in Breanne Armbrust, VEA’s director of field support, claiming she was unresponsive to staff concerns.

“As a result of these and other issues, VPSA morale has suffered dramatically, frustration has mounted, and there is a general feeling that Ms. Armbrust routinely creates unnecessary obstacles to, and interferes with, UniServ staff work,” read the no-confidence document.

Lest you think the complaints are all from one side, one retired teachers union activist pointedly blamed the staff for the hostile atmosphere.

“It seems VPSA still up to their usual tricks! For YEARS VPSA has tried EVERY TRICK they could think of to tear down the very structure of the VEA — they have organized protests, whisper campaigns against elected leaders, stalled negotiations with ridiculous demands, clouded and confused local association leaders with patently false information, done next to nothing to increase membership, demanded cuts in member programs if that’s what it takes to provide them ever increasing salary increases and health care benefits — never seeming to understand the very direct relationship of membership dues to healthy budget balances,” she wrote on the staff union’s Facebook page.

This rancor came to a head in July 2018, when staffers were handing out leaflets detailing their grievances outside of a teachers union organizing workshop held at the University of Richmond. Someone from the union called the campus police to have the leafleters removed from the premises. The staffers left peacefully but soon filed an unfair labor practice complaint with the National Labor Relations Board over the incident.

The National Staff Organization also approved sanctions against the union, noting that its staffers “have been ignored and siloed in a way that makes them feel like nothing more than the hired help rather than a valued component of a team.”

If the Virginia Education Association and its employees truly believe that collective bargaining is a collaborative process in which two sides come together to reach mutually acceptable solutions to problems, then it has a simple way to demonstrate that: Practice what you preach.