Analysis: The U.S. Department of Education — Born in the NEA 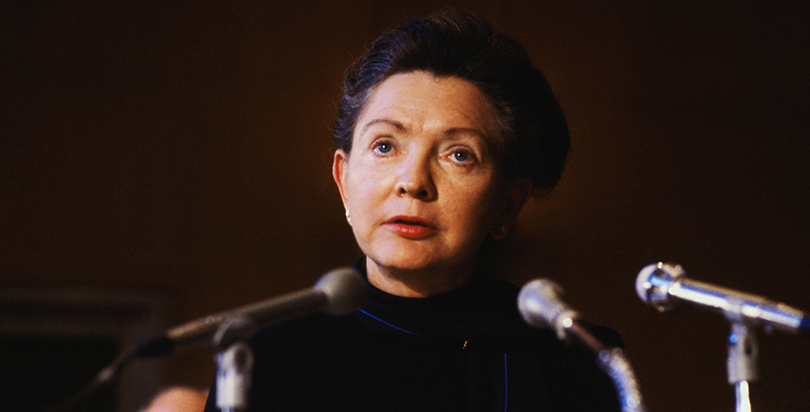 “Betsy DeVos is not qualified, and even more than unqualified, Betsy DeVos is an actual danger to students — especially our most vulnerable students,” said National Education Association president Lily Eskelsen García of President-elect Donald Trump’s nominee to be U.S. secretary of education.
This warning might have greater weight if we did not already know that NEA rarely approves of education secretaries — a noteworthy fact given that the union was instrumental in creating the Department of Education and the cabinet post that goes with it.
During his 1976 campaign, then–presidential candidate Jimmy Carter promised the NEA he would establish the department; in return, the union bestowed its first presidential campaign endorsement on the Georgia peanut farmer.
“There’d be no department without the NEA,” said NEA executive director Terry Herndon in 1980.
Support by the nation’s largest teachers union for a branch of the federal government dedicated to education actually went back many years before Carter. Union leaders believed a dedicated agency would give the NEA greater relative power over federal policy — power that was diffused by the many interest groups lobbying the Department of Health, Education and Welfare.
But NEA hoped for more than just a better seat at the table; it wanted the federal government to assume one third of the operating costs of public schools. At the time, the federal share was only about 7.5 percent and is not much higher now.
After the Carter victory in the 1976 election, NEA expected a swift reward for its efforts on his behalf. For the first time (but not the last), however, NEA was disappointed by a candidate it helped succeed.
Education had not been high on Carter’s priority list, but he announced a formal legislative effort to create the department in April 1978. The proposal moved easily through the Senate, but there was substantial opposition in the House even though the Democrats had a large majority.
While GOP lawmakers resisted expanding the federal government, Democratic opposition had a more surprising source, at least in retrospect: Al Shanker, president of the American Federation of Teachers.
Shanker deduced, not incorrectly, that the effort to create a department of education would serve as a power grab by the NEA. At the time, the two teachers unions were active rivals and competitors, not the frequent allies they are now.
Shanker established the Committee Against a Separate Department of Education and signed up more than 60 education, union and civil rights leaders, including AFL-CIO president George Meany, Senator Daniel Patrick Moynihan of New York and an academic whose name you might recognize, Diane Ravitch.

Shanker also worked the media effectively, and it was not long before the New York Times and other papers began editorializing against the proposed department.

Not to be outdone, NEA put together its own coalition that included the National School Boards Association, the National Parent Teacher Association, the American Association of School Administrators, the Council of Chief State School Officers, the National Association of State Boards of Education and the Education Commission of the States.
The two coalitions battled by proxy in the House of Representatives. On May 2, 1979, the measure barely squeezed through the House Government Operations Committee by a vote of 20–19.
When it arrived on the House floor, both sides had bipartisan support. Among the opponents were liberal Democratic representatives Richard Gephardt of Missouri, John Conyers of Michigan, Henry Waxman of California and Patricia Schroeder of Colorado.

“No matter what anyone says, the Department of Education will not just write checks to local school boards. They will meddle in everything. I do not want that,” said Schroeder.

Ultimately the House bill passed 210–206 with this party breakdown:

For: 175 Democrats, 35 Republicans
Against: 89 Democrats, 117 Republicans
The GOP votes in favor made the difference (including Newt Gingrich’s). However, the fight continued over poison pills the House added, including amendments authorizing voluntary prayer in public schools and a ban on busing for desegregation purposes.
With election season fast approaching, party leaders were able to remove the controversial items in conference. The final bill passed the Senate easily, 215–201, in the House. President Carter signed it into law on Oct. 17, 1979 — almost three years after his election.
The NEA was ecstatic but soon was forced once more to defer to the politics of the moment. Worried that the new agency would be framed as a payoff to the union during his re-election campaign, Carter decided to nominate an outsider as the first secretary of education: Shirley Hufstedler, a federal appeals court judge with no prior education experience, chosen specifically because she had no ties to the unions or other education groups.
There have been nine secretaries since Judge Hufstedler; only one, Richard Riley, who served under President Bill Clinton, was a clear favorite of NEA. The rest have been seen by the union as disappointments or inimical to its interests.
A recent report suggests the pattern may have continued had Hillary Clinton been elected.
NEA long desired an experienced educator as secretary, preferably one who had been a union member. But Mike Allen of Axios reported that, according to his interviews with Clinton insiders, there were only two names on Hillary’s short list: former Michigan governor Jennifer Granholm and past New York University president John Sexton.
Granholm is an attorney by trade. Sexton was the chairman of the board of the Federal Reserve Bank of New York. NEA’s leaders might not hate either candidate, but they certainly were not what the union had in mind when they endorsed Clinton well before the Iowa caucuses.
If NEA is able to help derail the DeVos nomination, it might get someone it likes better, but it will not get someone it likes. Instead we may see more editorials like the one written by Bruce Meredith and Mark Paige in the Los Angeles Times calling for the abolition of the Department of Education.
Which closes the circle: Meredith used to be the general counsel for NEA’s affiliate in Wisconsin.
Submit a Letter to the Editor
January 11, 2017