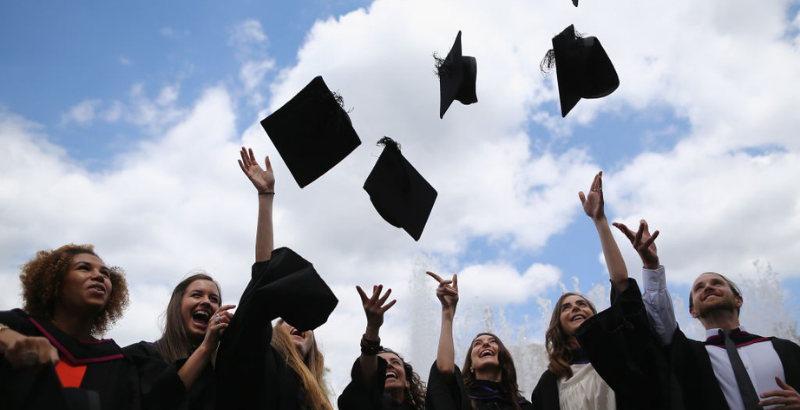 The American Rescue Plan Act offers a once-in-a-generation opportunity to improve state economies and propel them toward prosperity for years to come. Many states are currently deciding how to allocate the $350 billion in pandemic relief aid to state and local governments that Congress enacted last year. Those funds must be obligated by 2024 and spent by 2026. As states conduct this important debate, they should focus on investments that will have a lasting, transformative impact. One issue ripe for this approach is the college completion crisis.

Over the last two decades, the percentage of students graduating from high school and going to college has soared to historic highs. Growth in the college graduation rate, however, has been much more tepid. Slightly less than half of students who start college complete a degree within six years. For Black, Latino, low-income and first-generation students, graduation rates during the pandemic have fallen faster than at any time in the last 50 years.

Yet, finishing college yields huge payoffs — for the students, their families, future generations and society at large. Higher percentages of residents with college degrees are associated with more flourishing economies, lower unemployment, more patents and innovation, less crime, less dependency on public assistance and even higher rates of voting and civic engagement. In fact, according to 2019 analysis by Third Way, if the same percentage of students graduated from college as graduate from high school annually,  local, state and federal tax revenue would rise by more than $90 billion. This could fund education and training, research and development, infrastructure and a whole lot more to help states grow and prosper over the long term. Simply put, more college graduates means more people earning higher salaries.

So how can states address this problem? First, they can use the relief funds to expand enrollment in programs with a proven track record of increasing college persistence and graduation. Programs like CUNY ASAP, Bottom Line and One Million Degrees have counselors or case managers who work closely with students to help them overcome any barriers to completing their college degree. They provide students with a customized suite of supports, such as stipends, academic tutoring, transportation subsidies, career counseling and general guidance on navigating college requirements. They also closely monitor students’ progress and reach out to help them stay on track and hold them accountable for meeting their goals.

These programs and others, including Stay the Course, InsideTrack and MAAPS, operate primarily in community colleges and four-year public universities and are backed by rigorous evaluations showing statistically significant impacts. CUNY ASAP, which started in New York City and has since been replicated in seven states, has doubled the graduation rate of participants. Bottom Line, which operates in three states, increased the college graduation rate for its students by 23% within four years. ProjectQUEST, a similar program, has boosted earnings for its participants after graduation so dramatically that it consistently moves them out of poverty and into the middle class.

In spite of those compelling results, only a fraction of a percent of college students are enrolled in programs like these, and despite the strong evidence supporting their efficacy, these approaches have struggled to obtain the public funding they need to grow dramatically. But with the infusion of American Rescue Plan resources, states are finally able to do more.

In Colorado, for example, a task force convened by the governor and legislature recommended focusing the state’s remaining funds on programs, like those above, that will move the needle on key outcomes for students. Specifically, the task force recommended “intensive wraparound supports that reflect proven practices that substantially increase degree and credential attainment for learners (in particular learners of color, learners in poverty and first-generation students).” The legislature appears poised to implement these recommendations this session.

While last year’s federal legislation provides one-time funding, if states invest the money well, it will benefit both residents and the states’ budgets for many years to come. Evidence-based comprehensive student success programs cost money upfront but generate money over time — for colleges, through increased tuition and grant aid from students remaining enrolled, and for communities, through increased tax revenue and economic gains.

There are many worthy ideas for spending federal relief funds. Policymakers should look for projects and programs that are likely to provide a substantial return on investment for taxpayers. Increasing college graduation rates fits the bill.

Sameer Gadkaree is president of The Institute for College Access & Success. Michele Jolin is co-founder and CEO of Results for America.

Sameer Gadkaree is president of The Institute for College Access & Success.

Michele Jolin is co-founder and CEO of Results for America