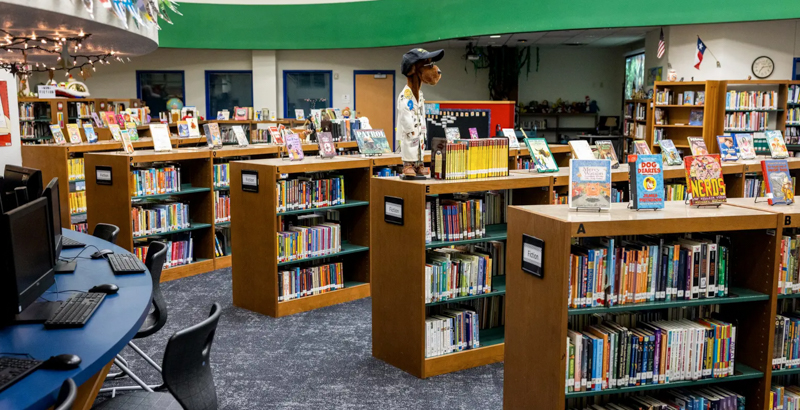 The library at Blanco Vista Elementary in San Marcos on Nov. 4, 2021. (Jordan Vonderhaar / The Texas Tribune)

Texas has a problem that’s bigger than the stories in the books at the school library.

If you were put on the spot and asked what needs to be done in public education in Texas, and if you were a candidate in the upcoming GOP primaries, boxing up some of the books available in schools might be the first thing on your lips. Maybe you’d also fret over subversive ideas in social studies and history texts.

But dictating what students are allowed to read depends on their ability to read in the first place. Falling test scores and learning lost to the pandemic might not light up the crowds at political rallies, but it’s a bigger issue than books that offend legislators’ tender sensibilities.

With any luck, you can push these debates out of mind until 2022 gets here in a couple of weeks. After that, it’ll be almost impossible to ignore. It’s already difficult to ignore: As of Monday, the people who’ll be on the ballot have all filed their papers with the parties and the state. The regular Austin spots where pols go to raise money are bustling with check-writing lobbyists and other interested parties. Voting in the primaries starts in the third week of February. The wave of political advertising will start as soon as the holiday advertising stops.

Some voters cope by tuning everything out. Turnout in party primary elections in Texas is dismal. In 2020, a presidential election year when turnout is usually at its highest, 12.4% of registered voters showed up for the Republican primary and 12.9% voted in the Democratic primary. Most — 74.6% — didn’t vote in those primaries. The numbers are even lower when you look at the whole voting age population of the state — the registered voters and the Texans who haven’t registered. Less than 20% of the state’s adults went to the polls two years ago.

Others cope by limiting their attention only to the candidates on their own side of the party line. That cuts the noise in half.

Some spend their attention carefully, sticking to issues that they care about and ignoring the noisy wedge issues that sometimes overwhelm political conversation and turn the public square — or the living room — into a kennel full of barking dogs.

Some candidates benefit from the barking, and from the fears stirred by whistles only their followers can hear. Besides, it’s easier to get a crowd stirred up by something uncomfortable in a young adult novel than by descending scores on math tests.

Wars over the contents of books are as old as books. It would be sweet if people fought as hard over why students don’t spend enough time in libraries in the first place. But content fights are better political issues, raising voter passion without risking a debate on the overall quality of education kids are getting in Texas.

Education is hard — for teachers, students, makers of policy and law, and politicians. It’s easier, unless voters are unusually focused, to sway an election with a debate over books most people will never open than to sway it with a debate about STAAR reading assessments that have dropped in every single grade in Texas elementary and middle schools over the last two years.

What’s written in books is only a problem for people who can read. But in Texas politics, the quality of education isn’t what draws a crowd to the polls. If it was, politicians would be recommending books to read instead of pulling titles off the shelves.

Ross Ramsey is executive editor and co-founder of The Texas Tribune, the only member-supported, digital-first, nonpartisan media organization that informs Texans about public policy, politics, government and statewide issues. This article originally appeared on Dec. 15 at TexasTribune.org.

Ross Ramsey is executive editor and co-founder of The Texas Tribune, the only member-supported, digital-first, nonpartisan media organization that informs Texans about public policy, politics, government and statewide issues.