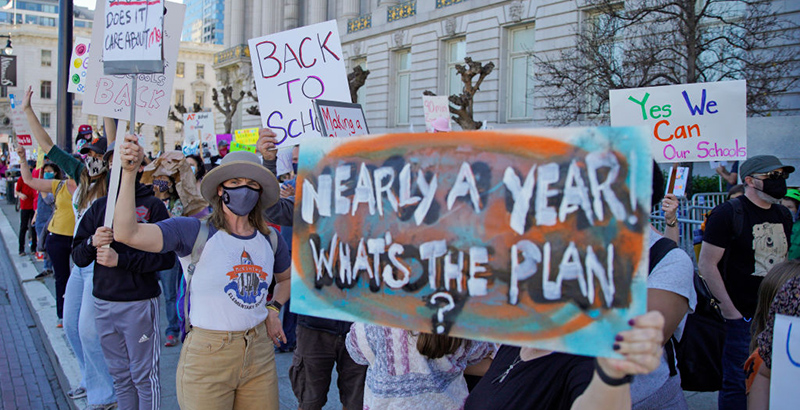 “CTA believes that school closures are disruptive and detrimental to the education of students, and to the communities in which they are located.” — California Teachers Association Organizational Handbook 2020-21, p. 324.

The union instituted this longstanding policy to oppose school closures for budgetary or enrollment reasons. But now, it is seeking political advantage from its current full-throated defense of school closures due to COVID-19.

Every state has butted heads with its teachers unions over reopening. But in California, the entire political power structure consists of Democrats who are union allies. Neither the politicians nor organized labor is dealing well with suddenly being adversaries of the other.

California Gov. Gavin Newsom proposed a plan to reopen schools, which was summarily rejected by the unions and the legislature for being too hasty. The unions and their legislative allies put together their own plan, which would delay reopening until mid-April. Newsom opposes it.

Both highly organized and ad hoc parent groups are forming to push for reopening, but they are running into steadfast union opposition.

“I remember when parents supported teachers during their strike a couple of years ago. It seems now all teachers stand quietly not supporting parents now,” wrote one parent on a Facebook page devoted to reopening the state’s schools.

This should come as a shock to absolutely no one. When almost all school districts in the state shut down last March, the union already had its advocacy message in place.

“Sadly, in many ways, this pandemic is showcasing some of the challenges we face in our schools every day,” said President E. Toby Boyd back then. “The lack of adequate nurses and counselors to assist our students is a constant struggle. We know many districts right now are struggling with having adequate cleaning supplies.”

“The educators who are in front of students right now should be vaccinated, and there should be testing taking place to make sure that the virus itself is not entering the school site,” Boyd told EdSource. “If districts are going to plan on opening, they need to make sure that the educators who are going to be in front of the classes when they reopen have the vaccine.”

Although federal Centers for Disease Control and Prevention guidelines do not call for all school employees to be vaccinated ahead of reopening, Boyd’s position was at least understandable — that is, until he undermined it with his very next sentence.

“All this is done on the presumption that the educators involved will want to have the vaccine, because it’s their personal choice,” he said.

So schools can’t reopen until all educators are vaccinated, because it poses a risk of death and illness for them, their families and their students if they are not … unless they don’t want to be? Does the risk to them and others then disappear?

For an entire year, CTA and the other school employee unions have deflected calls to reopen schools, but they are finally feeling some heat. Their response is to treat the situation just like a political campaign.

The unions produced and aired an ad in major state media markets warning that COVID-19 is “still a threat.” The ad highlights newspaper headlines regarding coronavirus cases in schools in Roseville and San Diego. As is typical of political ads, the citations are highly selective.

The Roseville case involved an outbreak of 17 COVID-positive high school students (out of 1,612 at the school). The district quickly quarantined classmates and staff and canceled in-person instruction.

The San Diego story is a much more cynical use by the unions. The ad uses a Union-Tribune headline reading, “San Diego County had 283 school COVID-19 cases in two months.”

A look at the story on the newspaper’s website shows an important caveat was excised from the headline: “but data are limited.”

That’s not the only context missing from the union ad. The denominator is, too: There are about 500,000 K-12 public school students in San Diego County.

The story itself emphasizes that there is no information on where the students or staff contracted the virus. Indeed, a district spokesperson is quoted as saying there have been no known outbreaks in a K-12 setting in the entire county — an outbreak being defined as “three or more cases from different households who went to the same location within a 14-day period.”

Californians may be focused on reopening, but CTA has other fish to fry. One large priority in ensuring that education funding isn’t used to pay for all the COVID-19 mitigation measures the union is demanding. The union also created an online petition seeking to eliminate standardized testing for the year. Unfortunately for CTA, the Biden administration has already decided to retain standardized testing requirements.

Finally, having helped to all but eliminate elected Republicans from the state’s executive branch and legislature, the union now seeks to increase the number of friendlier Democrats. An open assembly seat in San Diego drew two union representatives as candidates.

California wasn’t the first to close schools, but it will be among the last to reopen. Expect the unions to gain every political edge possible in the meantime.