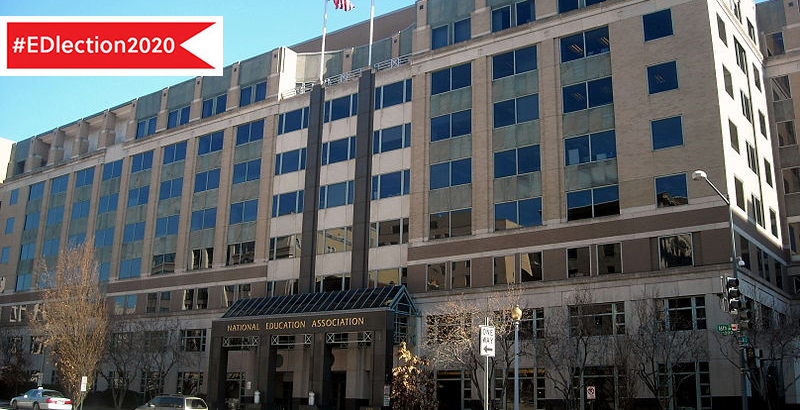 Soon after the election, the National Education Association released its “Policy Playbook for Congress and the Biden-Harris Administration” in which it recommended initiatives in 27 areas for the incoming federal government to champion. Among these was “tax fairness.”

The union wants to “repeal or amend certain tax breaks in the 2017 Tax Cuts and Jobs Act (TCJA) for the wealthy and corporations, and replace them with a progressive tax system based on individual and corporate ability to pay in order to yield sufficient revenues to address national needs.” Additionally, NEA opposes “tax loopholes or giveaways that reduce revenues and shelter corporations and high-income individuals from paying taxes.”

Then, the day before Thanksgiving, NEA filed its annual financial disclosure report with the U.S. Department of Labor. It revealed that the union took in $375 million in dues during the 2019-20 school year, all of it tax-free. That was $6 million more than in the previous year.

That’s not all. NEA sold more than $209 million of its stocks and securities during the year, an increase of more than 3,200 percent from 2018-19. For an individual or a business, such a large selloff would trigger a large capital gains tax bill. But NEA is exempt from capital gains taxes.

But when an organization accumulates that much cash, it doesn’t stuff it into mattresses. NEA reinvested its profits into stocks and other securities to the tune of $278.5 million.

NEA doesn’t operate entirely tax-free. It still must pay income tax on “unrelated business income.” That is, revenue from businesses placing ads in NEA publications, book sales and the like. All told, the union paid $7.2 million in direct taxes of all types on more than $603 million in gross revenue in 2019-20. That’s an effective tax rate of 1.2 percent.

NEA’s policy playbook declares the union’s opposition to “arbitrary maximum limits on any state or local government’s ability to spend or tax, particularly since such limits have a negative impact on the full funding of schools.” How is NEA’s privileged tax position benefiting D.C.’s public schools?

To be sure, there are legions of tax-exempt organizations with a wide variety of missions, and they span the entire political spectrum. But you won’t find too many as wealthy as the National Education Association spending those tax-free revenues on campaigns to insist that others pay their “fair share.”