Analysis: Have the Unions Benefited From the DeVos Confirmation Fight? 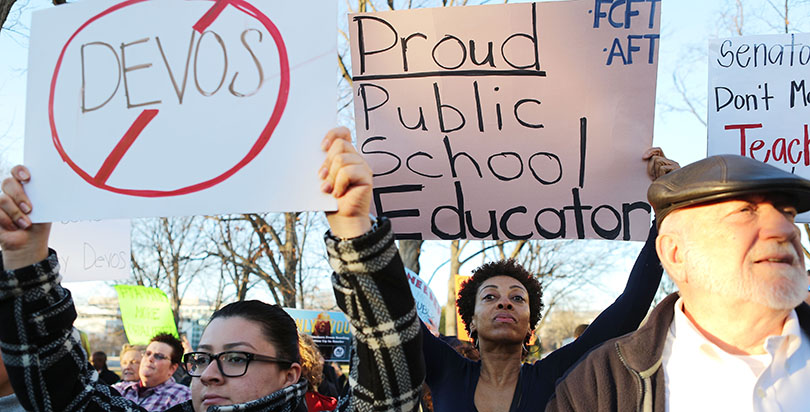 It has been a month since the U.S. Senate narrowly confirmed Betsy DeVos as secretary of education, with Vice President Mike Pence casting the tiebreaking vote. Despite unprecedented resistance, the teachers unions were unable to prevent the confirmation.

But did they come out ahead anyway? “The public in public education has never been more visible or more vocal, and it is not going back in the shadows,” said American Federation of Teachers president Randi Weingarten after the vote.

“Today’s outcome marks only the beginning of the resistance,” added National Education Association president Lily Eskelsen García. She was specific about her reason for optimism.

“We have won hundreds and hundreds of thousands of new activists,” she told Vox, assembling a “contact list to die for” from the more than 1 million emails and 40,000 phone calls to the Senate during the confirmation process.

Those are impressive figures, and the opposition to DeVos was greater than we have seen in many years for a Cabinet nominee. But two questions about the union’s anti-DeVos campaign remain: (1) Was the strategy effective? and (2) Will it result in more effective future campaigns?

On the most basic level, the answer to the first question is no. The primary purpose of the campaign was to stop DeVos; that failed. Was the sheer volume of activism a victory? Well, yes and no.

The teachers unions often prompt their members to contact members of Congress, but never as successfully as during this recent effort. That’s a big deal for NEA, which informed a group of union activists in a private meeting last year that it had no email addresses for 45 percent of its members. You can’t influence members you can’t reach, so to this extent NEA is better off than it was before the confirmation battle.

On the other hand, context is important. A 2014 CQ Roll Call survey found that senators received almost 143 million emails in a 10-month period, and almost 17 million phone calls. Being blasted with communications from angry constituents and lobbyists is very much a way of life for our elected representatives.

Both teachers union presidents are convinced that their anti-DeVos coalition will be on hand for future advocacy efforts.

“I think what you’re going to see is a lot of grassroots action, just like with the Tea Party, over and over and over again,” said Weingarten. “The level of energy is palpable,” said Eskelsen García.

The amount of “active” in activism is crucial. The app NEA used to generate all those emails advertises its ability to “customize engagements and messages so that advocates can take action with just a single click.” It’s unclear, in other words, how many in the unions’ camp are merely slacktivists.

Activists who are more engaged may attend rallies and marches, but there are serious questions about whether these activities are especially effective.

Will they help to contribute more money to the teachers unions’ political action committees? Perhaps, but the unions’ use of that money does not inspire confidence. NEA and AFT spent a combined $82.5 million on federal races during the past two election cycles, with a net result of seven lost Senate seats, eight lost House seats, and a lost presidential race.

If the new supporters galvanized by opposition to DeVos’s campaign do become highly active for union causes, they may go further and inquire into the unions as well. They might ask important questions about how these powerful organizations make policy decisions, handle funds, and choose candidates to support or oppose.

Who knows? They might before long even run for the union’s top offices. We’d see then how NEA and AFT feel about committed activism.