Analysis: From the High Court to the Picket Line — How the Janus Case Emboldened Teachers Unions & Made Strikes Key to Their Survival 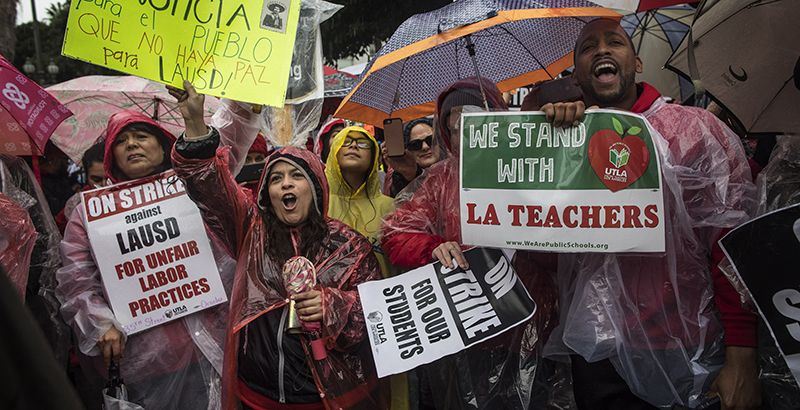 People rally in the streets of downtown in the pouring rain during a United Teachers Los Angeles strike Jan. 14 in Los Angeles. (Barbara Davidson/Getty Images)

Los Angeles Unified School District teachers made national headlines this week when they brought operations in the nation’s second-largest district to a screeching halt. The first work stoppage in the district in 30 years capped a nearly two-year-long negotiations process that saw very little movement on the more than 20 issues brought to the bargaining table.

The strike follows a tumultuous 2018 for teachers unions. If union leaders could invent a time machine, they would likely go back to Nov. 8, 2016, and find a way to secure Hillary Clinton another 43 Electoral College votes. The aim would be to dodge President Trump’s Supreme Court appointments and ultimately forestall a June 27, 2018, 5-4 vote in Janus v. AFSCME. The mandatory collection of fees from non-union members is now prohibited throughout the United States, and non-union members can benefit from union services for the cool price of zero dollars.

But the Janus decision could invigorate the unions it intended to incapacitate, with the recent spate of strikes, including the ongoing situation in L.A., as evidence that this may be the case. The defeat in the nation’s highest court further legitimized a cause for unions to rally around and gave them the opportunity to listen to and direct the frustration of a profession toward making real improvements for teachers. Succeeding in this effort could be the key to their survival.

The Janus ruling came down at a time when frustration in the teaching profession was already at a boiling point. National polls suggest that less than half of teachers are satisfied with their salaries. Fifty-nine percent have worked a second job to make ends meet. Subject-area teacher shortages and poor teacher retention around the country make diminishing morale and appeal of the profession even more problematic. In large urban districts, just over half of teachers remain in the classroom after five years — and the pipeline for new hires could be shrinking. Only 46 percent of Americans would recommend becoming a public school teacher to their child, down from 70 percent just 10 years ago.

The spring 2018 teacher strikes and protests in West Virginia, Oklahoma, North Carolina, Kentucky, Colorado, and Arizona demonstrated this frustration and sent a shock wave through the profession. The #RedForEd movement was a self-proclaimed protest against legislatures’ underinvestment in education postrecession, the symptoms of which are low teacher pay and understaffing.

With rising discord among teachers last spring, the June ruling in Janus presented unions with a challenge and an opportunity. Because non-members could now get services for free, teachers unions would have to provide enough value to justify the full cost of membership — and they have a stronger case to make when an enemy stands right outside the castle walls.

As a teachers union leader in San Jose, California, put it, “In a world where every local constantly has to be prospecting for membership, it’s easier to organize around a crisis and fear — against a villain.”

In some ways, the Janus case magnified the cause of the spring walkouts. The case was bankrolled by well-funded union antagonists and ultimately decided by a Trump appointee who serves as part of a new conservative majority on the high court. In short, unions could message the Janus defeat as a continuation of the same “attacks” carried out by red-state legislatures, with the teaching profession, a properly funded education system, and students again as the victims. Their prevailing rallying cry to their membership: “America needs unions now more than ever.”

Since Janus, teachers have walked out of classrooms in several districts in Washington state and in Chicago charter schools, and now they have taken to the streets in Los Angeles, disrupting operations in a district that stretches 710 square miles, employs more than 30,000 teachers and support staff, and instructs some 640,000 students.

United Teachers Los Angeles President Alex Caputo-Pearl has, on multiple occasions, drawn connections to the spring walkouts and Janus, and he has made the pitch that the union is the best shot for gaining increased school funding and greater respect for education and for teachers. With momentum already building from job actions in Washington and Chicago, the court case may have served as more of a wake-up call than a death knell.

If the L.A. strike leads to real improvements for its members, it will once again showcase the value of unions and ensure their survival and relevance in a post-Janus world — and the baton will pass to the next group of dissatisfied educators and teachers unions eager to prove their worth.

Bradley D. Marianno is an assistant professor of educational policy and leadership at the University of Nevada, Las Vegas.

Correction: Only one Trump appointee was serving on the Supreme Court at the time of the Janus ruling.

Bradley D. Marianno is an assistant professor of educational policy and leadership at the University of Nevada, Las Vegas.