Support The 74 and stories like this one. Donate Today!
Analysis
EDlection 2020
Union Report

In one way — maybe the only way — it was a very ordinary election for president of the United States.

Donald Trump won in 2016 by unexpectedly capturing Michigan, Wisconsin and Pennsylvania, by small margins. Unless the Democratic Party were run by complete imbeciles, they would focus all their attention on reversing the outcome in those three states. They were entirely successful, and so Joe Biden is our president-elect.

The Democratic Party is taking a lot of heat from party insiders, the press and liberals for underperforming on most other electoral stages. Democrats will have no better than a 50-50 U.S. Senate, fewer seats in the House and a decided lack of gains in statehouses across the country. Even in deepest-blue California, the party failed to push the margins.

Continued GOP control of the Senate would be a blow, but not necessarily a debilitating one. A split Senate, or a thin majority, would leave the door open for party switchers, or just the sweet-talking of swing votes like Republicans Susan Collins of Maine and Lisa Murkowski of Alaska, and Democrat Joe Manchin of West Virginia. Other senators might want to get in on that swing vote action.

The loss of a handful of House seats, or even two handfuls, isn’t enough to lead to similar swing vote courting.

So since the Democratic Party’s likely position for 2021 isn’t as grim as it is made out to be, what would it mean for the National Education Association and the American Federation of Teachers?

For one thing, one of their presidents might very well be nominated for U.S. secretary of education. Either Randi Weingarten, current president of AFT, or Lily Eskelsen García, former president of NEA, should get the nod.

The best bet is Eskelsen García. She’s available, while Weingarten would have to give up what amounts to a lifetime position at AFT. NEA is the larger union and is present in all 50 states, ensuring a teacher contingent lobbying for her everywhere. She’s a Latina and once ran for Congress in the deep-red state of Utah. Most important, her nomination would be relatively cheap payback to the teachers unions for their campaign support. Other special-interest groups might not be so easy to satisfy.

The composition of the Senate might be a roadblock to confirmation, but it’s unclear whether Republicans would be willing to go to war over putting a teachers union officer in the cabinet. I don’t see opposition rising to the level of character assassination and pettiness that unions themselves have engaged in.

Whether or not a union executive got the job, Biden would prioritize K-12 funding, and for this he might find support across the aisle. This is a Congress that is now comfortable with spending trillions of dollars in one fell swoop. What better way for both sides to show their bipartisanship than to drop a few hundred billion on schools? Abrupt shifts in education policy might meet with more resistance, so cash is a way to keep everyone happy.

Unions would get more money and an open door to a very friendly education secretary. So it’s all cakes and ale for the next four years, right? Not exactly.

Take a look at this troubling exit poll result from the New York Times: 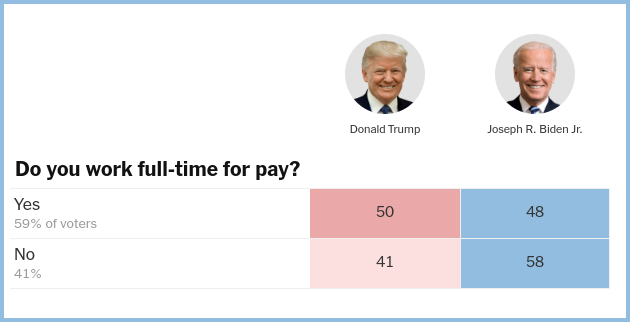 Joe Biden received at least 4.5 million more votes than Donald Trump, but if this survey is accurate, he lost among people who “work full-time for pay.” These are the same people who would have to fund those stimulus packages, bailouts and campaign promises. Would they be wooed into the fold with a return to a normal presidency, exemplified by Biden? Or would they continue to express defiance at the polls in 2022?

Teachers unions and their Democratic allies would face a familiar dilemma: assume all political power is short-lived and push a far-reaching agenda while the sun shines, or shoot for incremental gains in an attempt to extend that power over multiple election cycles.

I know which way I’m betting. Moving the ambitious Affordable Care Act through Congress consumed most of the first year of Barack Obama’s presidency. In the 2010 midterms, Republicans captured six Senate and 63 House seats. But we still have the Affordable Care Act.

So whatever a President Biden’s own priorities might be, I’d expect to quickly see a lot of progressive legislation introduced amid a great deal of new spending. With, at best, a two-seat majority in the Senate, Republicans would not be able to fight on all fronts all the time. Public education employees and their unions would reap the rewards.