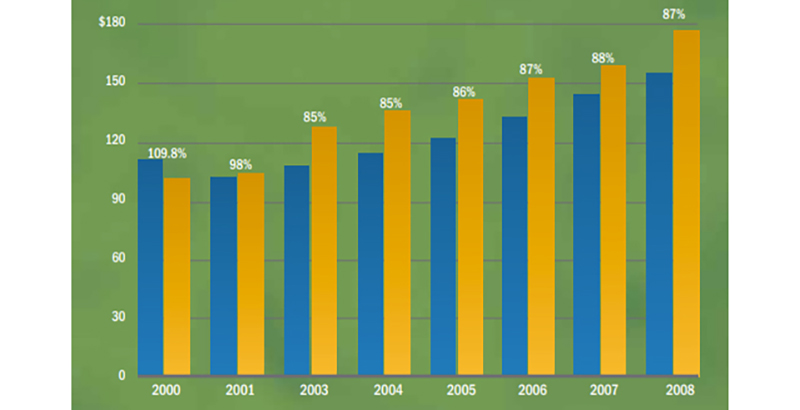 You can’t get very far in the public education policy debate without coming across the pension issue. School districts are seeing a greater portion of their budgets going toward covering their obligations to retired employees. The fiscal pinch makes negotiating with current employees even more difficult than it might otherwise be.

The state has increasingly chipped in to stem the tide, but one still gets the sense that we’re only a recession away from being overwhelmed by debt. The California State Teacher Retirement System (CalSTRS) is confident that the system will be fully funded by 2046, but that’s a long way away, and a lot can happen to change that forecast. We need only compare these two CalSTRS graphs showing funding ratios, first from 2000 to 2008, and then from 2008 to 2017: 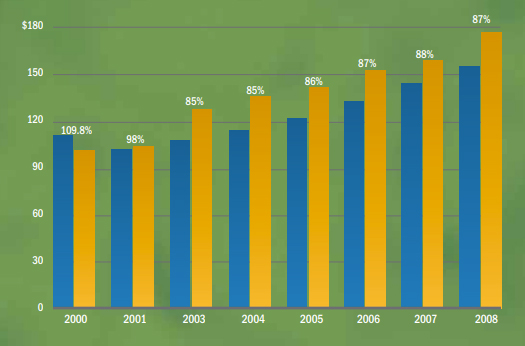 CalSTRS has gone from more than 100 percent funded to 63 percent funded in just 17 years. The pension system owes $107.3 billion more than it can currently pay. Fortunately, that bill does not come due all at once.

California teachers have been retiring at a pretty consistent clip over the past 10 years. Statewide, we lose an average of about 12,500 public school teachers each year to retirement. The average retiree in 2018 was 63 years old and had served a little more than 24 years.

CalSTRS members who retired in 2018 received an average annual pension of $54,144. That benefit increases by an inflation protection adjustment of 2 percent each year.

Evaluating whether this is inadequate, modest or exorbitant depends greatly on where those CalSTRS members decide to live upon retirement. That amount may not last long in the Los Angeles metro area, but it is higher than the average working teacher salary in 25 states.

California teachers do not pay into Social Security, and so they do not receive those benefits when they retire. However, CalSTRS pays them more than double what a Social Security beneficiary would receive with the same final working salary and retiring at the same age.

We tend to frame the pension issue as a thin line between school districts and the state on one side, and public employees on the other. But as pension obligations grow, it also becomes a tug-of-war between the 300,000 CalSTRS retirees and the 650,000 educators who are enrolled in CalSTRS but are still working.

Not only do the working educators have to worry about the fiscal health of the system decades into the future, but they face accepting smaller salary increases so benefits can be funded properly.

It’s a game of musical chairs with a lot of participants. As long as the music lasts, everyone has a good time. When it stops, someone will be left without a seat.