Analysis: Charter Schools Spend More on Administration — but It Might Not Be Bad for Kids

Ronald Reagan’s secretary of education, Bill Bennett, coined the idea of the educational Blob — a derisive term to describe, as a 1987 Education Week article put it, education “bureaucrats … devouring money that would be better spent in the classroom.”

“While many administrators and principals are doing good work, the question is: Do we really need all of them?” Bennett asked at the time.

Even news articles sometimes repeat this frame, such as a story in The New York Times that described charter schools as “a way to allow educators to try new approaches without being encumbered by the bureaucracy of traditional schools.”

So it may come as a surprise that charter schools — a favored reform of Bennett and other critics of traditional public education — generally spend significantly more on administration than district schools, according to several studies in different states.

Why do charters have such relatively high administrative costs? And is it a bad thing, a sign that charter schools have become a part of the very problem they were supposed to solve? Looking at student achievement in some places, such as New Orleans, suggests that it’s not.

The latest research to come to this conclusion focuses on New Orleans — where charter schools have almost completely replaced the traditional district — and finds that while instructional spending in the city has flatlined or even decreased, administrative costs have skyrocketed. In 2005, New Orleans was spending about $1,000 per student (adjusted for inflation) on administration; by 2014, it was about $1,700, while a comparison group of Louisiana districts was still at about $1,000.

The initial jump in spending was likely because of temporary disruption after Hurricane Katrina, but even several years later, city schools are spending much more on administration than comparable districts in the state. 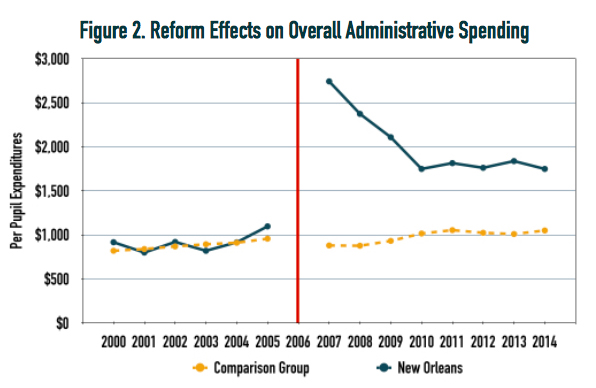 Administrative costs, in this study, include salaries for school-based administrators such as principals. They also account for “central administration includ[ing] planning, research, development, evaluation, information, staff, and information technology activities.”

Meanwhile, New Orleans’s instructional costs — which are largely driven by teacher salaries and benefits — dropped modestly compared to other districts, despite a large increase in spending in the city schools as a whole. Much of the drop was due to a reduction in fringe benefits for teachers, particularly through changes in the retirement system. 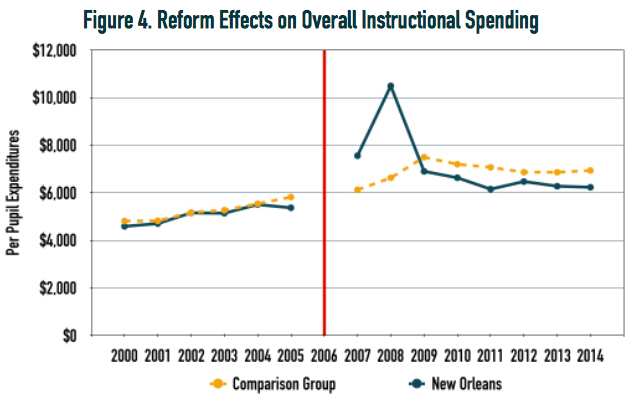 In the Michigan study, for instance, the researchers conclude, “Controlling for factors that could affect resource allocation patterns between school types, we find that charter schools on average spend $774 more per pupil per year on administration and $1,141 less on instruction than traditional public schools.”

In New Orleans, about half of the increased spending above the comparison districts comes in salaries for administrators — there are more of them, and they’re paid significantly better.

The study notes that the administrative spending jumps may be because charter schools are hiring staff with more diverse backgrounds and stronger educational credentials.

“Charter schools are more likely to hire educators with degrees from elite colleges and school leaders with business backgrounds, people who typically earn high salaries outside of education,” the researchers write.

Another explanation for this phenomenon nationally is a lack of economies of scale for some charter schools. Most charters are one-off schools, whereas districts usually oversee many schools. Even charter networks may in most cases be significantly smaller than large districts. This means that charter schools have to spread out the expense of certain administrative duties across fewer students, which increases the costs per pupil.

The student enrollment of individual charter schools is also significantly smaller, on average, than the average district school. Charters are much more likely than traditional public schools to enroll fewer than 300 students.

Some research suggests that schools operating with 300 or fewer students and districts with fewer than 500 risk significant inefficiency, in part owing to larger administrative costs.

A final factor may be the role of for-profit entities in the operation of charter schools; according to one estimate, about 20 percent of charter students attend a school that is operated for profit. A recent study found that, consistent with other evidence, both for-profit- and nonprofit-run charter schools spend a greater share of dollars on administration than district schools, and that administrative costs in for-profits was higher than in nonprofits.

Virtual charter schools, which are often run by for-profit companies, seem to spend a particularly large share on administration — 15 percent or higher, compared with about 10 percent in traditional public schools.

Conventional wisdom in education seems to be that students benefit when more money is spent “in the classroom” and less is spent on purportedly bloated bureaucracies. But there is remarkably little evidence to bear this out in either the traditional public or charter school sector.

There’s little evidence that charter schools in general have been harmed by higher administration spending. On average they perform comparably to traditional public schools on standardized tests, with significant variation between schools, cities, and states. In general, charters seem to do better in cities and for low-income black and Hispanic students, but worse in suburbs and for white students.

Small schools lead to higher administration costs, but they may also benefit students, according to studies of district schools in New York City and Chicago.

One study from a spending increase in Michigan school districts showed that the new money benefited students, and that much of it was spent on more administrators.

There’s also not much research showing that, despite their high administration costs, for-profit charter schools produce lower student achievement overall. Some studies show that for-profits do a bit worse, others that they do a bit better, and still others that they perform comparably to similar district schools. One notable exception is virtual charter schools, which seem to produce large declines in student test scores.

As a recent study described the literature, “There is limited evidence that charter schools generally, as well as those operated by [for-profits] and [nonprofit charter networks], are less efficient as a result of increased administrative expense.”

None of these studies can prove definitively whether money spent on administration would be better spent in the classroom (or vice versa), but as a whole, they provide little support for the idea that classroom-based spending is clearly preferable to administrative spending in charter schools.

Network spokesman Steve Mancini said most KIPP schools have one principal and three to five assistant principals, one of whom serves as a full-time operations manager, focusing on, for instance, managing enrollment procedures, overseeing facilities, and purchasing technology.

Other in-school administrators focus on supporting and evaluating teachers, with KIPP’s goal being to ensure that a principal or assistant principal observes or meets with each teacher at least twice a month. To do so, Mancini said, the network tries to ensure that each supervisor oversees just eight to 10 teachers.

It’s unclear how this compares to traditional public schools. As one point of comparison, in New York City’s district schools, principals must observe teachers four to six times per year, though they can choose to do more. Research has found that successful charter schools in New York City prioritize giving frequent feedback to teachers.

Mancini said he couldn’t provide specific data on how much KIPP spends on administration compared with district schools.

The Blob might not be so bad after all

The lesson from charter schools’ spending might be that pejoratively categorizing administrative costs — in districts or charter schools — as The Blob or bloated bureaucracy is misguided. Administrative spending might be helpful, or it might not be — it depends on the context, how the money is spent, and the individual school. Different schools and different sectors might have different costs.

That doesn’t mean that school districts shouldn’t ensure that money is spent wisely — that administrative dollars are used well and that school leaders are genuinely supporting students and teachers. Individual charter schools may, of course, be spending too much on administration.

Additional research is also warranted: Why do for-profit operators seem to have such high administration costs, and are they justified? Might measures of school performance other than test scores — the dominant metric — reveal different patterns in how to best allocate spending? Could some charter schools increase in size to become more efficient? Are big salaries for administrators worth it to recruit and retain talented individuals, or might they be a form of self-dealing?

But turning bureaucracy into a dirty word in education is probably a distraction from these key questions rather than a fair description of the work of school administrators.