Analysis: California Is Still the Golden State for Teacher Unions 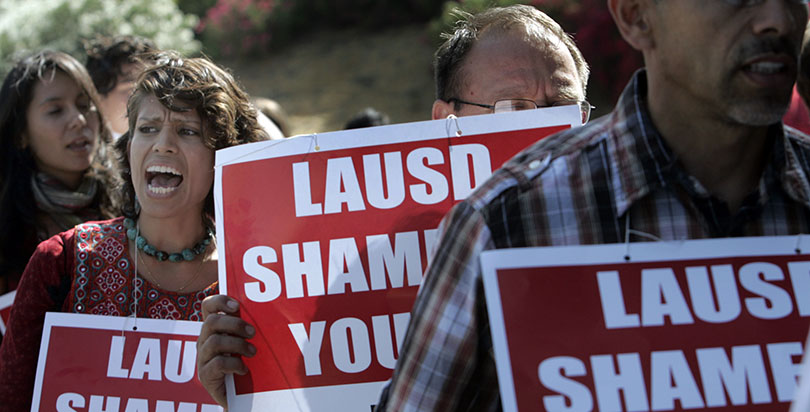 While teachers-union affiliates across the country ponder what went wrong on Election Day, the California Teachers Association and California Federation of Teachers are celebrating another successful year at the polls.
The unions helped deliver Hillary Clinton a 29-point margin of victory in California and backed Kamala Harris in her successful bid to replace U.S. Senator Barbara Boxer, who is stepping down. They could also take credit for helping Democrats maintain a 39–13 margin in California’s delegation to the U.S. House of Representatives.
The two state ballot initiatives they supported with millions in contributions and thousands of volunteers were both passed — one extended a measure raising taxes on top earners in order to direct more funds to schools, and the other reinstituted bilingual education.
They worked for Democrats across the state, helping the party maintain a 26–14 margin in the state senate and pick up three seats in the state assembly, which now has a 55–25 Democratic majority. Of the 112 candidates CTA endorsed, 91 were elected.
That union’s reach extended into local races as well: CTA backed successful measures in 34 of 36 local and municipal races, and 142 of the 218 school board candidates it supported were victorious — an impressive record given the tangles of municipal politics.
The unions didn’t have it entirely their way. Some California Democrats support education reform and are backed by a formidable group of charter school advocates. And while Governor Jerry Brown is very much a traditional Democrat, he has been known to stand in the way of the union agenda.
Still, the political successes of California union affiliates — along with those in New York and Massachusetts — increased their status relative to those in the Midwest and Pennsylvania, a traditional labor stronghold. As the presidential election vividly demonstrated, support for the Democratic Party is consolidating in fewer, more urban areas. One wonders if that phenomenon will be mirrored in the teachers unions and, if so, how that will inform political and labor strategists in future elections.
At their highest levels of decision-making, both teachers unions have geographic diversity challenges. A plurality of the membership of the American Federation of Teachers works in a single state — New York. The AFT does not impose term limits on its leadership and has no viable organized opposition caucus, so the presidency belongs to Randi Weingarten for as long as she wants it.
On the other hand, the National Education Association’s larger and stronger affiliates are actually underrepresented among the union’s leadership. The three executive officers of the NEA are from Utah, Pennsylvania and Virginia. The six other members of the Executive Committee are from Illinois, Mississippi, Michigan, Wisconsin and Tennessee — and only one from California.
Ideological and strategic divisions about how best to regain advantage — embodied in the Hillary Clinton–Bernie Sanders split in 2016 — will overlay with these geographic divisions as the unions deal with a hostile federal government and new legal challenges to agency fee laws.
Submit a Letter to the Editor
November 29, 2016