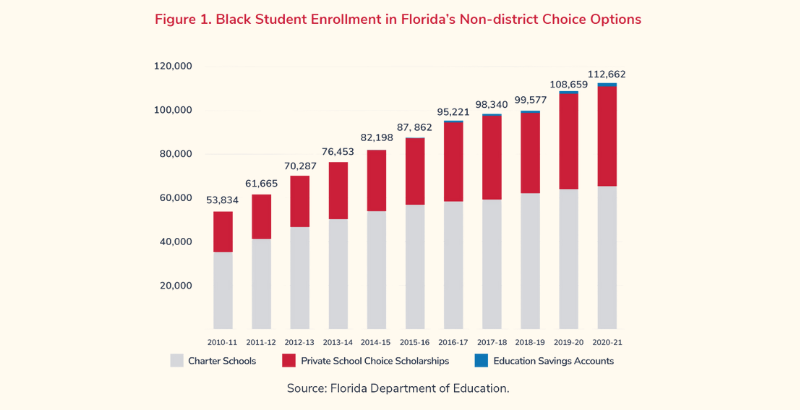 A new report, “Controlling the Narrative: Parental Choice, Black Empowerment & Lessons from Florida” — a joint effort among Black Minds Matter, the American Federation for Children and Step Up for Students — analyzes the great migration of Black families to choice schools, the positive academic trend lines for Black students participating in school choice programs and the growth of Black-owned schools in Florida. We found that the Sunshine State now has more than 100,000 Black students enrolled in charter and private schools.

This number is striking. That’s more Black students enrolled in choice schools in Florida than total Black students — period — in 30 states, including Arkansas, Minnesota, and Massachusetts.

In the most recent report from the Florida Department of Education, Black students in charter schools outperformed those in district schools in 31 of 38 categories, including proficiency, achievement gaps and learning gains. According to EdChoice, in 11 of 17 random-assignment studies examining test scores, students using private school choice scholarships achieved higher test scores than those who applied but did not receive or use them.

According to the National Assessment of Educational Progress, in the mid- to late- 1990s, Black students in Florida district schools lagged behind nearly every state. A quarter-century later, that situation is nearly reversed, and Black students in Florida district schools rate No. 1 in fourth-grade math, third in fourth-grade reading and sixth in eighth-grade reading.

It is no secret that the COVID-19 pandemic disrupted learning for all students across the country, and that those hurt the most by school closures were minority students from lower-income backgrounds in government-run public schools. For instance, McKinsey found that Black students were six months behind in math and reading, while students in majority-white district schools who were four months behind in math and three months behind in reading. The report also found that Black students were more likely than their white peers to drop out of high school and less likely to attend college due to school closures.

However, COVID-19 didn’t create these achievement gaps; it widened pre-existing disparities and shed light on the historic inequalities in the public education system.

Yet, when parents exercise their right to self-determination, academic outcomes for Black students improve. For instance, Harvard found that Black students who participated in charter schools had learning gains up to six months ahead of their district school peers.

School choice programs, including private schools, charter schools and homeschooling, have not just expanded over the past 30 years and improved the academic outcomes for Black students but have also been celebrated and demanded by Black parents.

According to the Florida Department of Education, more than 100,000 students have been on waitlists for charter schools for two years in a row. Between 2010-11 and 2020-21, the number of Black parents seeking income-based private school choice scholarships tripled, from 14,799 to 48,208. This is evidence of the incredible demand for choice from Black parents in just one state. The truth is, families all across America want more power to access the schools that work best for their children — and there is no good reason to deny them.

Florida parents want better for their Black children and are not patiently waiting for government schools to fix themselves. School choice programs have done more to advance academic achievement for Black students in 30 years than the public education system has in centuries. It’s time for lawmakers to listen to their constituents and give parents control of their school funds to choose the best learning environment for their children that will truly allow Black children to thrive.

Denisha Merriweather is director of public relations and content marketing at the American Federation for Children and founder of Black Minds Matter.

Denisha Merriweather is director of public relations and content marketing at the American Federation for Children and founder of Black Minds Matter.