Analysis: As Los Angeles Braces for Its First Teacher Strike in a Generation, Some Echoes Resonate From 1989 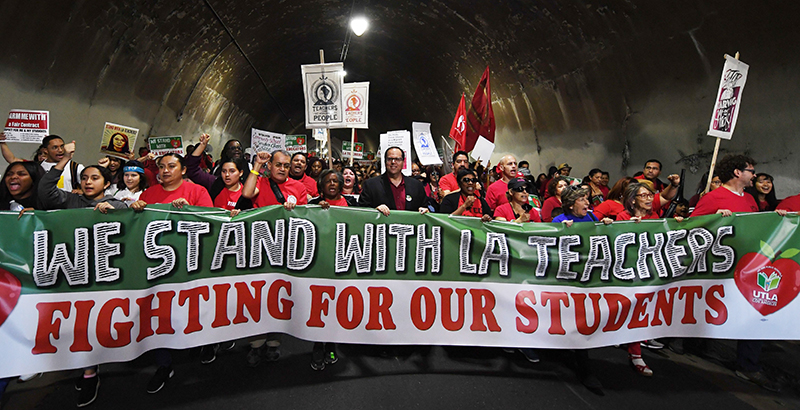 The Los Angeles Unified School District and United Teachers Los Angeles are marching inexorably toward a strike — perhaps as early as this week — leading many to think back 30 years to the last L.A. teacher strike, in May 1989.

UTLA calls the 1989 strike a “historic UTLA victory” that resulted in a “historic contract.” Some may differ with that interpretation, but the effects of 1989 linger today. Some are very different, some are remarkably similar, and some have come full circle.

One major difference was that UTLA held its strike authorization vote only one month prior to the strike in 1989, and the composition of the electorate was quite different. Back then, California teacher unions could charge agency fees to non-members only if they were negotiated into the local collective bargaining agreement. UTLA had no such agreement, though it was one of the union’s contract demands in 1989.

At the time of the vote, only about two-thirds of the district’s 33,000 employees were UTLA members. Non-members weren’t allowed to vote. About 80 percent of UTLA members approved a strike.

This division between members and non-members played out during the strike as well, though it had no effect on the ultimate outcome. During the first week of the strike, the district reported that 8,642 teachers went to work, which would be considered a huge number of defectors in 2019.

UTLA tried to head off any undermining of the strike by sending a letter to the departments of education at 12 local colleges that contained veiled threats should students consider substituting during the strike. The union warned that if they did so, “they will be identified and tracked” and face retaliatory “aggravation” after the strike ended.

“I’m not saying that they will get beat up, but normally teachers go out of their way to help new teachers,” said Sam Kresner, then UTLA’s director of organizational services. “The warning to new teachers is that they will do as little as possible to help you.”

With L.A. Bracing for Its First Teacher Strike in a Generation, Parents Feel ‘Stuck in the Middle,’ Worry Their Children Could Be Harmed by a Shutdown

The state superintendent of public instruction at the time was Bill Honig, who had just helped carry the union-sponsored Proposition 98 to a narrow victory in November 1988, even though many other public employee unions opposed it. Prop. 98 still forms the basis for California’s public school funding guarantees.

But when Honig suggested that the district’s pay offer was generous and that UTLA should accept it, Johnson told him to “stay in Sacramento and butt out of things that don’t concern you.”

Also lost in the mists of time was the $400 million deficit the district faced at the end of that three years, and the subsequent vote by UTLA members to accept a 10 percent pay cut.

Though the teachers’ monetary victory was short-lived, UTLA did come out ahead. The union won a majority on the school board a month after the strike. “The political strength of teachers cannot be underestimated,” said Johnson, who could also boast Jackie Goldberg among UTLA supporters on the 1989 board. The union recently endorsed Goldberg for the open District 5 seat.

By the end of 1989, the board approved the addition of agency fees to the collective bargaining agreement, provided a vote of the teachers was held. Since two-thirds of those voting were already UTLA members, it was a foregone conclusion. UTLA collected agency fees until 2018, when the U.S. Supreme Court Janus decision struck them down everywhere.

Johnson rode his UTLA victory to the presidency of the California Teachers Association, where he brought his special brand of negotiating to the state capitol.

If the 1989 strike can teach us anything about 2019, it may be that the strike itself isn’t as important as the efforts made to implement the settlement, the composition of the school board, the movement of the players afterward, and the state of the economy — for better or worse — years after Los Angeles teachers return to work.