Analysis: Arizona Is the Worst State in the Nation in Serving Students Still Learning English

Remember that kid who always got in trouble at school? The one who never listened to the teacher and struggled to follow the rules? Well, when it comes to English language learners — students who come from households where English is not the primary language spoken — Arizona has reliably been America’s chief troublemaker. (Some quick backstory here, here and here). Just how bad have things gotten? The federal government has started taking action against the state. Earlier this month, the U.S. Department of Education’s Office of Civil Rights (OCR) and the U.S. Department of Justice's Civil Rights Division (DOJ) reached a settlement with the Arizona Department of Education (ADE) to begin properly identifying and exiting students from special English learner services.

The settlement is just the latest development in a story that dates back to (at least) 2010. That year, OCR and DOJ began an investigation into a complaint against ADE alleging that, starting in the 2006 school year, “thousands of ELL students are being reclassified as ‘proficient’ in English when test results indicate that they are not in fact proficient in English.” Specifically, the complaint stated that these errors were due to: 1) the state’s reliance on the Stanford English Language Proficiency (SELP) test and, later,  the Arizona English Language Learner Assessment (AZELLA) test as the only criteria used to reclassify ELL students; and 2) faulty scoring procedures that resulted in students being identified as proficient even when they weren’t.

The OCR and DOJ’s investigation found the allegations to be true. They worked with an expert psychometrician to examine data of tens of thousands of students and found that “the AZELLA fails to identify all ELL students, prematurely exits ELL students, and is not a valid measure of English language proficiency and readiness to exit the ELL program.” As a result, ADE was cited for being out of compliance with Title IV of the Civil Rights Act of 1964 (which prohibits discrimination based on race, color, or national origin) and the Equal Education Opportunities Act of 1974 (which guarantees ELL student’s rights to language services to help ensure their equal participation in educational programs).

English Language Learners are identified for services through two primary mechanisms: a home language survey and formal assessment of their English language proficiency.  Once identified, ELL students take an English language proficiency (ELP) assessment annually to gauge their progress in learning English. States have varying criteria for exiting (or reclassifying) ELL students from services, but about half of states use ELP scores as the only criteria to determine whether an ELL has reached proficiency in English. Here’s a chart of how the ELL identification and reclassification process works: 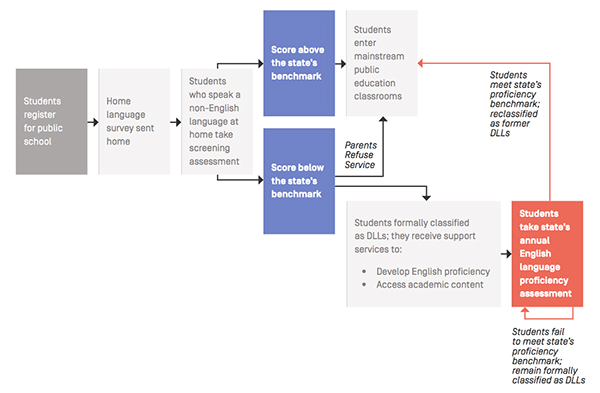 In 2012, the OCR, DOJ and ADE entered into a voluntary agreement to address the issues uncovered during the investigation. Specifically, Arizona agreed to create and administer a new version of the AZELLA exam (called the AZ-3) and to “adopt new, valid, reliable, and objective criteria for LEAs to use to ensure that each ELL student has obtained English language proficiency in reading, writing, listening, and speaking” before being identified, reclassified or exited from ELL services.

However, subsequent monitoring by OCR and DOJ revealed that even after the 2012 agreement, ADE continued to improperly identify ELL students as English proficient and prematurely exit them from language services. OCR and DOJ asserted that the state failed to provide “sufficient evidence” regarding the validity of the new cut scores used to determine ELLs’ English proficiency. Additionally, they found that ADE had also underidentified “thousands of Kindergarten ELLs…and thereby denied them access to ELL services” and failed to annually assess the English proficiency of kindergarten students whose parents had opted out of ELL services. Arizona denied all of these violations, yet still agreed to resolve them voluntarily (most likely to avoid litigation by OCR and DOJ).

The terms of the 2016 settlement are that Arizona will identify ELLs in a “timely, valid, and reliable manner…offer them ELL services until they demonstrate proficiency in English…not to prematurely exit them from ELL services; and to continue to annually assess the English proficiency of ELLS who decline ELL services until they are proficient in English.” In other words, Arizona has once again “voluntarily agreed” to provide ELLs with the services that they are guaranteed by law. In a moment when national interest in using federal power to protect underserved kids is waning, though, there’s a very good chance that this voluntary agreement will be just another round of promises as empty as the Sonoran Desert.

The facts of the settlement more than confirm Arizona’s position as the troublemaker state in the national “classroom” when it comes to serving ELLs. Remember, in addition to the state’s struggles to comply with basic federal policies on ELL entry and exit, Arizona has one of the country’s most restrictive language policies for instructing ELLs. Specifically, Arizona ELLs are segregated into daily, four-hour blocks of Structured English Immersion (SEI) classes that “teach” English in isolation from content. As Patricia Gándara and Gary Orfield wrote in a 2012 article, the legislation mandating the use of SEI “specified that students would not normally spend more than one year in the four-hour SEI block” due to the belief that students would quickly become proficient in English and mainstreamed. Unfortunately, that assumption is empirically-bankrupt; it flies in the face of rigorous research demonstrating that it takes ELs four to seven years to reach academic English proficiency.

Rapid reclassification — exiting ELLs quickly and prematurely from language services — has been found to have negative impacts on ELLs’ academic outcomes. Recently, researchers Joseph Robinson-Cimpian and Karen Thompson examined the impact of California’s adoption of more stringent reclassification criteria on the subsequent achievement and graduation of ELL students in Los Angeles schools. They found that prior to the shift to more stringent criteria, reclassification had a negative impact on the academic achievement and graduation rates of high school ELL students. In other words, a low reclassification bar means that many students are exited and mainstreamed before they are ready. Reclassification policies suffer from a bit of a Goldilocks problem: If you set the bar too low, you run the risk of exiting students before they’re ready. If you set the bar too high, you make it hard for students to exit at all.

Reclassification policies need to be set just right to ensure that ELLs get the services they need until they don’t need them anymore.

In Arizona, many former ELLs continue to struggle academically once they leave language services. The 2010 OCR and DOJ investigation revealed that the state’s former-ELLs had lower achievement levels on Arizona’s standardized assessment than native English speakers and that many struggled to “meet state academic proficiency standards…in their first two years after exit without ELL services.” This finding flies in the face of the growing research base showing ELLs’ considerable academic potential: former-ELLs have similar graduation rates to non-ELLs and in some cases, higher academic achievement than their non-EL peers.

As the state hopefully changes its identification and reclassification processes, it will be important to track the number of ELLs being served each year. Recent data from the National Center on Education Statistics (NCES) shows that between the 2002 and 2012 school years, Arizona had a 9.6 percentage point decrease in ELL students — the largest decrease of any state (and during a period when national ELL enrollment increased). Could it be that the decrease was related to the persistent underidentification of EL students? Or simply the inevitable result of the state’s restrictive language and prejudicial immigration policies?

Back to the future: Will Arizona now take the terms of the settlement seriously and actually create a valid and reliable system for identifying and reclassifying ELLs appropriately?

History suggests that there is little state appetite for treating these students with the dignity they deserve. But the state can hardly afford to continue denying language learners the chance to meaningfully participate in their schools. After years of misbehavior — and this latest slap on the wrist — it’s time for Arizona to clean up its act and get in step with the rest of the class.

This essay was produced by the New America Foundation’s Dual Language Learners National Work Group. Click here for more information on this team's work. To subscribe to their biweekly newsletter, click here and select "Education Policy."

Amaya Garcia is a senior researcher in the Education Policy program at New America where she provides research and analysis on policies related to Dual Language Learners.Previously, Ms. Garcia was a policy analyst at the District of Columbia State Board of Education and provided analysis on statewide education policies and regulations, including accountability, attendance and truancy, family engagement and standards implementation. 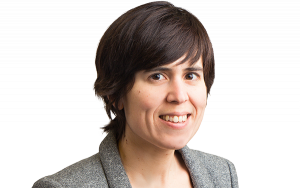